Andrea Bowers is a political artist who makes artwork that is just as compelling aesthetically as it is conceptually. She says her work is "service to the cause of activism," but at the same time she looks for "an aesthetic within the subject" to communicate her political message.

Bowers' recent work at Suzanne Vielmetter Los Angeles Projects continues her ongoing commitment to the labor movement. The centerpiece Triumph of Labor is an appropriated political graphic from an historic Walter Crane illustration celebrating an industrial workers' May Day march. In her hands, the 1891 British graphic is turned into a monumental 22-foot wide black drawing on cardboard from flattened shipping boxes. The cardboard shipment carries a message from the industrial era in Britain to Los Angeles workers' unions - which is just as relevant today - to workers who carry protest signs that are also written on cardboard. On the opposite walls, Bowers creates a mural from 168 color photographs of workers' protests she has documented in Los Angeles since 2008. By juxtaposing an historic graphic enlarged to epic proportions with an epic mural of sign carrying protesters, she honors the collective power of the individuals who work for a labor cause that spans over a century. 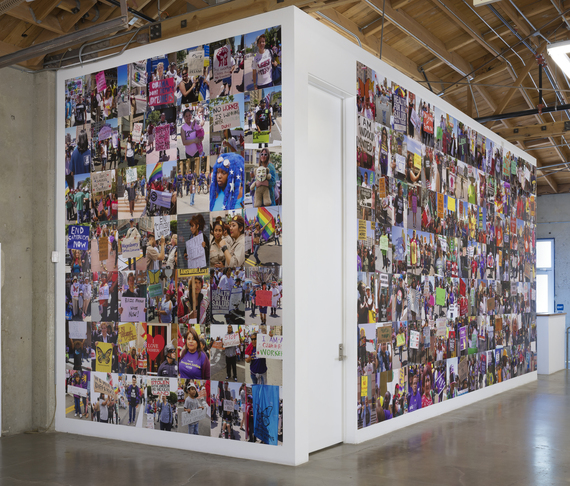 In a second gallery room, Bowers' continues her homage to these individual protesters in a series of small tender drawings based on her photographic documentation. Bowers uses her own artistic labor in these heartfelt drawings to make further aesthetic connections between art, activism and labor. These tiny figures hold protest signs or have signs on their t-shirts, but they are isolated from the protest spectacle to draw attention to their individual identity. Bowers positions these figures at the bottom of the image, using negative space to draw attention to their marginal position and the human significance of voices that are often disregarded. The negative space also creates a sense of the importance of what is left out of the picture -- the large amount of ground covered by an ongoing activist history.

Aesthetics and politics are inseparable in all these artworks - just as working as an artist and an activist is inseparable in Bowers' own life. Bowers calls these "old fashioned drawings," in which her own labor pays respect to members of activist groups she views as powerful individuals. Bowers is a feminist artist who has researched political graphics for 20 years, looking for different ways to represent women as "monumentality powerful." Female protesters in these drawings carry signs like, "Womxn Workers of the World Unite." 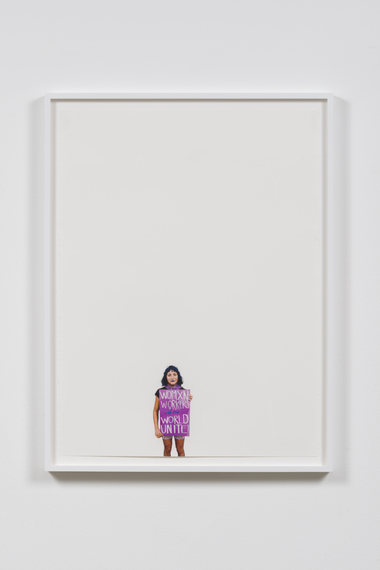 In a third gallery room, a wall and table sculpture highlight the shocking statistics in higher education today: that despite the highest tuition fees in history, part-time instructors with no job security or benefits are paid the same wages as McDonald's workers. Bowers uses an electric wall sign encased in cardboard packing boxes -- her trademark materials used throughout this exhibition -- illuminating the words "Education Should Be Free" in colored lights. On a table sculpture, she stakes e-mails and printed research documents from a collective bargaining team negotiating Otis College of Art and Design's first union contract -- in which she is actively involved as a part-time faculty member. Tables are another visual device Bowers often uses to draw attention to the activist practice of tabling contract negotiations, and the bureaucratic processes in boardrooms settling labor disputes.

Bowers says, "I try to make sure the form, the materials, and the aesthetics are metonymic to the subject matter." Her work is strongly influenced by her artist mentor, Cal Arts professor Charles Gaines, and his theory of aesthetics and politics. Gaines' seminal essay Reconsidering Metaphor/Metonymy: Art and the Suppression of Thought (2009) led Bowers to reject metaphors (tropes that carry over meaning between unrelated things) and search for metonyms (signs that stand for social causes, formed by social agreements). Of course, metaphors are usually preferred in art because they involve the imagination. But metaphors can also be abused -- as we see today when Donald Trump lodges misogynistic insults against strong, intelligent women, describing them as "pigs," "crooked," and "ugly." Trump plants the seeds for imagining that these women are exactly as he describes through metaphors -- which bypass any cognitive thought process. Metonyms might be more literal, making them less desirable to traditional artists - but they allow viewers to think critically. In the skillful hands of an artist of such deep integrity as Bowers, metonymy is the basis for artwork that is both aesthetically and politically powerful -- but never didactic. Bowers' work pays respect to both the viewer's freedom of thought and her freedom fighter subjects. 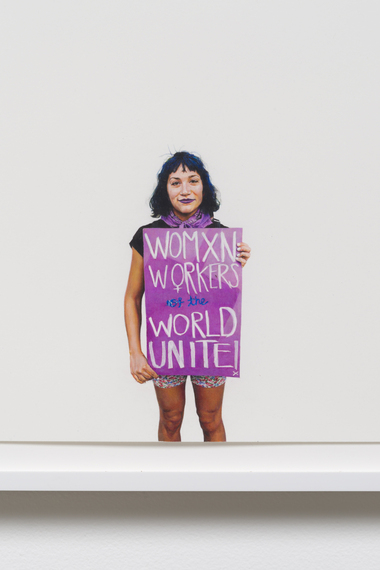 Today, feminism is trending and feminist art is making a comeback -- after decades when any mention of word "feminism" was shunned as a bad F-word. Bowers emphasizes that she is influenced by exemplary feminist artists who came before her: Adrian Piper, Martha Rosler and Nancy Buchanan. Her own long history of making feminist art and feminist activism -- even when it was not trendy -- has not stood in the way of receiving international critical acclaim, because her work is so visually and intellectually complex.

Bowers' work was included in the Whitney Biennale 2004, the California Biennial 2008, and many museum group shows. Her work is in the collections of MoMa, The Hammer Museum, MOCA, Whitney Museum, Hirshorn Museum and Sculpture Garden, and Museum Abteilberg. This is her fourth solo exhibition at Susanne Vielmetter Los Angeles Projects (on view June 4- July 9, 2016).