Though she started out life as an illustrator and a painter, these art forms by themselves were never totally fulfilling to Andrea Chung. For one thing, she did not like "bringing to life someone else's ideas," which is what illustration calls for. She also did not find painting "really relaxing or therapeutic," as she heard others around her describe their love affair with painting. What she did like, though, was finding materials and applying paint to them. It was this interest in materials and process that would come to drive her work.

And it was through her love of materials and ideas that she came to realize that she is really a mixed-media conceptual artist.

Chung obtained her BFA from Parsons School of Design, where she was an illustration major. She completed her MFA at Maryland Institute College of Art (MICA). Chung credits MICA for helping her find her artistic voice and her artistic vision. When she got to MICA, Chung began to examine fibroids in the lives of black women in particular, who are known to be more impacted by fibroids than other groups of women. The artist wondered why this was so. Through her work she began to unravel how one's diet tangibly affects one's health and body. These realizations led to a powerful series in which she used cutouts and photographs of black women and made literal the effects of certain foods -- sugar, for example -- on one's reproductive system. In these works Chung is looking at the effect of colonialism on black female bodies. The cotta that women in these stunning works carry on their heads is both an actual and a symbolic load.

As the child of a Trinidadian mother and a Jamaican father, Chung considers herself Caribbean-American, and she is preoccupied with issues relating to the Caribbean region. She does not hesitate to admit the complexity of her heritage. "When I am in the Caribbean," she told me, "I am seen as more American. While in America I am seen as Caribbean. As a Caribbean person in America, I am often forced to confront the really skewed ideas that many people have about the Caribbean."

In her "May Day" series she does just that by using collaged images to make pointed commentary on the racial politics of the Caribbean and how the Caribbean is often stereotyped and viewed by outsiders. The Caribbean, she believes, was constructed as a place where "foreigners can come and feel safe." Hence the oversized focus on tourism, and a kind of "domestication" of the local population, to placate a touristic imagination.

Chung's earlier work with food would resurface in her examination of the diets fed to people who were brought to the Caribbean. A diet in fact heavy in starch and made up largely of foods not indigenous to the region. She did a series of sculptures on wooden shipping pallets in which she traced the history of certain spices and food items as they made their way to the Caribbean. In doing so she found out that "there is not only a rich history but a lot of power in tracing back where food comes from. I was finding out that, like people, different types of food have migrated to the Caribbean region."

In a series of installations at various residencies, Chung has dealt specifically with sugar, which she says has a really rich history of movement and migration. As a Fulbright fellow in Mauritius, she became interested in the comingling of the history of both sugar and fishing on the island. "After the abolition of slavery on the island of Mauritius," she explains, "many newly freed slaves became fishermen and subsequently established small fishing villages, especially in the southern part of the island, rather than return to the cane fields to work for their former enslavers. Many of these fishing villages remain today and these fishing traditions have been passed down for generations. Unfortunately the trade is now threatened due to overfishing."

Chung began making multiple boats, similar to the boats used by Mauritian fishermen, cast out of sugar, that are floated in a large water bath. "Over time," says Chung, "the boats disappear, mirroring the disappearance of the fishing trade in Mauritius. I also cast liquor bottles out of sugar to recreate a method of fishing used by some Mauritian fishermen. The bottles are accompanied with small metal and sugar replicas of fishing tackle, such as weights and hooks, and are wrapped and entangled in fishing line. As I cast the bottles they are hung and left to the elements of the space. Over time the bottles dematerialize and shatter, reflecting the disappearance of both a community and a trade."

Chung is a prolific artist. She is always working, always experimenting. Oftentimes her work takes years in gestation. As she said to me, "Those sugar pieces that I made about Mauritius took me about three years to figure out how to make them. But luckily, I like experimenting. I like finding interesting materials and seeing how they work together. I love examining the history of a material."

Currently, the artist is engaged in a collaborative work that looks at the persecution of black midwives both in the Southern United States and in the Caribbean. In this work she is examining the various ways of birthing and, yet again, the wisdom passed down from one generation (of women) to another. "There is the idea, for example," she notes, "of cutting labor pains by putting scissors under the birthing bed of the woman. It is ideas like these that my collaborator and I will be examining in this latest body of work." 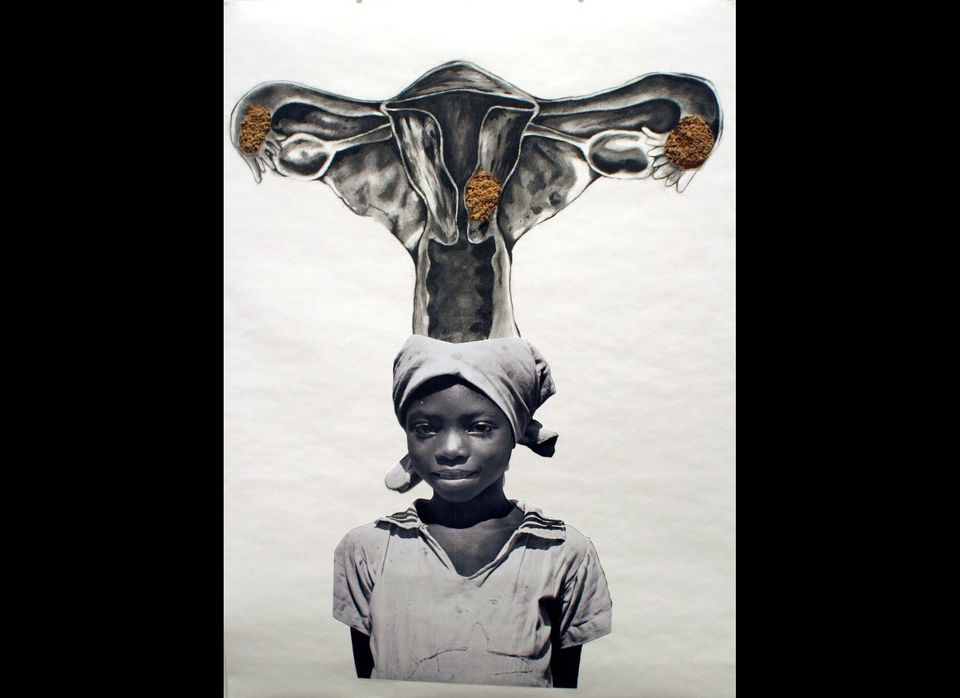