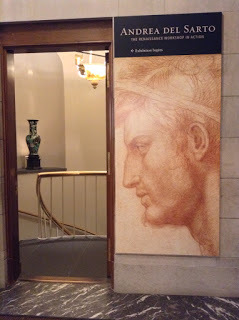 The current exhibit at the Frick, "Andrea del Sarto: The Renaissance Workshop in Action," features drawings that became the basis for his paintings. The curators quote from Giorgio Vasari's Lives of the Artists to the effect that del Sarto's work was "free from errors and absolutely perfect in every aspect." There are, for instance, six drawings that del Sarto developed for the "Madonna of the Steps" including one of "Arms, Legs, Hands and Drapery" (1522) done in red and black chalk and one "Head of a Youth in Profile," which demonstrates del Sarto's his ability to use elements of the face and body to demonstrate emotion, in this case the parted lips evoking a sensuous awe. Interestingly these drawings prefigure the cutting and pasting techniques that are used in the creation of digital images today since many of the them, became self-appropriations, that would appear directly in the paintings. What's also interesting about this particular show is the way that is the way it underscores the relationship between visual and verbal languages. Where the fresco and painting "Tribute to Caesar" and "Madonna and Child with the Young St. John" might be the sentences, the drawing with its parts becomes like the figure of speech taking on either a synecdochic and at times even a fetishistic relationship to the whole, as is evidenced by the haunting personification in del Sarto's drawing, "Studies of Hands" (1527). It's a testament to del Sarto's mastery that a seemingly limited subject like "Drapery Study" (1522), created to duplicate the effect of clothing bunching as it hangs to the floor, could take on such a life of its own. Del Sarto means son of the tailor so the painter's brilliant renderings of fabric may have had its provenance in first hand observation of his father's own shop. Some of the Del Sarto's paintings are also exhibited in the current show, but the emphasis is really on drawing (and techniques like stumping, in which a wet brush is applied to the chalk surface) by one of the great technicians of the Renaissance whose talent was sometimes overshadowed by the fame of contemporaries like Michelangelo, da Vinci and Raphael. In fact, taking a look at the few paintings on display in Frick's oval room, you might have had the impulse, were del Sarto still alive, to tell the artist to go back to the drawing board.