Lucky magazine Beauty Director Jean Godfrey June once wrote of then Creative Director Andrea Linett that if her outfits walked through a room without her body in them, you'd know whom they belonged to. It's true--Andrea's signature skinny jeans, rock & roll boots, abundance of delicate layered jewelry, hippie bags and self-described "hole-y cashmere sweaters" are uniquely her. So is that wavy, just-the-right shade of dark hair; the open laugh; the keen eye for style and the refreshingly democratic attitude about fashion ("We can all have style and you should have fun getting dressed," she said). All of these together make Andrea one of the most beloved and influential individuals in the industry today. 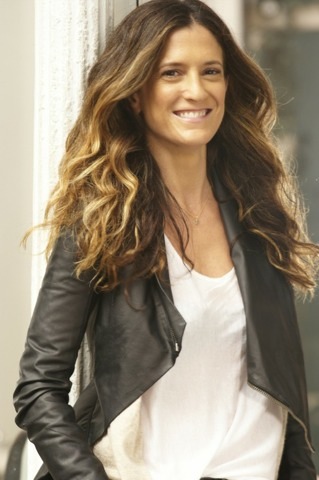 Confession: I worked at Lucky under Andrea, who co-founded the magazine, for several years. So did over half the regular contributors to The Inside Source. Andrea was our Pied Piper of style, setting the tone for the oft-copied look of the glossy as well as the office, where a handbag she a mentioned casually in conversation somehow ended up on the arm of the entire staff the following week. "I want to be her" was something we all thought more than once about Andrea. (It's also the name of her new blog, where she deconstructs the style of cool girls around town and tells you where you can guy score their stuff.)

Andrea, whose own fashion icons include Bob Dylan, Jane Birkin and "anyone who looks like they're not trying too hard--even if they're trying really really hard," recently signed on as the Creative Director of eBay Fashion. What follows is an excerpt of my interview with Andrea, which can be read in full at The Inside Source.

The Inside Source: I've heard stories about how you discovered actress Chloe Sevigny while at Sassy. What's that all about?

Andrea Linett: I was the stylist for the Jane Pratt Show [Sassy Editor-in-Chief Jane Pratt's talk show]. So we were shooting a commercial for the TV show and I saw Chloe at a newsstand and I said to the producers, "We have to put that girl in the commercial." And they said, "Oh no. She's weird." And I said, "No you don't get it; she's amazing." So I went up to her and I asked her and she sad, "Well, I'm actually cutting school. I live in Connecticut." So she was playing hooky. So we put her in the commercial.

I said I want to shoot you for Sassy. And so I gave her my number and her mother called me and said, "I think its great for her to model, but I think she should do something more worthwhile. So can she be your intern?" We said sure, we love her--she had already modeled for us for a while by then--and then she became our intern. She was like our mascot.

The Inside Source: Have you always wanted to work in fashion?

Andrea Linett: I either wanted to work in advertising, because my mom's always been in advertising and I grew up with it and I always found it really interesting, or fashion, because I have been obsessed, even from a very young age, with fashion magazines and catalogues and books about fashion. My first job out of school was at Sassy magazine. I was beyond thrilled to answer the phone. I was the receptionist. I could not believe I got the job. I was interviewing at fashion magazines and I think I found this one in the New York Times--"receptionist wanted"--very "Gal Friday". I was the receptionist for six months. Then I was promoted to Fashion & Beauty Assistant. We did everything there. Everything but the layouts. We did the casting, the styling. I got to do everything for our photo shoots. You would never get to do that now. So I learned a lot in a short time.

The Inside Source: Ok, so how about your personal style? How would you describe your style uniform?

Andrea Linett: I think I just like things that are classic. Most people think of classic as a white button down and a loafer. But even classic rock & roll clothes, to me, that's a classic. Even a fur vest is a classic because it's been around forever and is never going away. But I like to throw a little trend in there once in a while for fun. But I feel like, as I get older, I don't do that as much. I pair down a little more than I used to.

I'm embarrassed to admit that one of my signature pieces--that Kim France [Lucky's founding Editor-in-Chief] pointed out to me--is that my sweaters always have holes in them!

The Inside Source: So in your new role as Creative Director of eBay Fashion, what are you tasked to do at eBay?

Andrea Linett: eBay is one of the most amazing marketplaces in the world. It needs to reflect that this is the fashion destination and it doesn't at the moment. It doesn't have the right look and the right voice and it's still amazing. So imagine when it does. It's a lady who needs to be pampered. It's a beautiful woman walking around with a horrible haircut. It needs to be treated like the beautiful lady it is. It needs to be elevated. We have to make her up. There's going to be a point of view.