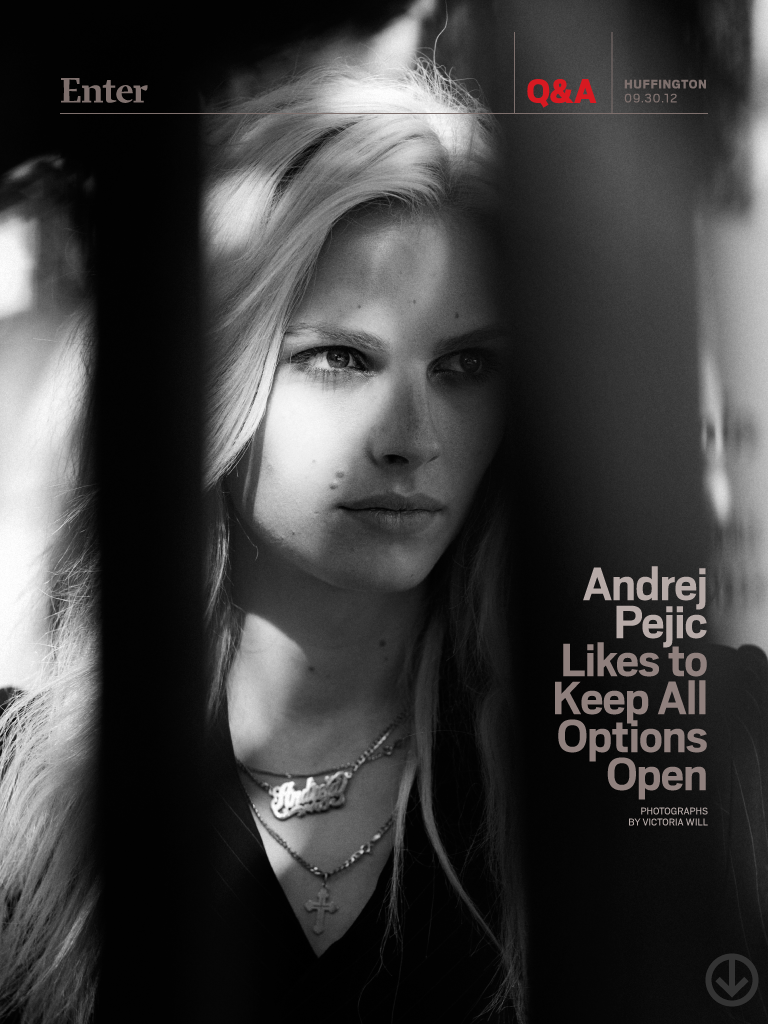 After being scouted by a modeling agent at 17 while working at McDonald's, Andrej Pejic has found himself at the center of both the high-fashion world and a contemporary debate over gender binaries. Now 21, the Bosnian supermodel is known internationally for his signature "girl-boy" androgynous look, ethereal white-blonde hair and delicate features. While those who see his face in Vogue Paris' glossy pages or on Jean Paul Gaultier's runway may confuse him for a woman, Pejic refuses to be defined by traditional conceptions of sexuality. Media attention has followed. -- Sarah Leon

No, I never felt that I looked like a boy. When I was growing up, people would mistake me for a girl because I didn't develop muscles or facial hair and I stayed very feminine.

Although that wasn't my goal in the beginning, if my story could be beneficial to people that are transgendered or want to explore androgyny, I'm prepared to share it. I recently went to China to do a show for Jean Paul Gaultier, and outside there were about a hundred kids waving with flowers and gifts and letters. The thing that most touched me, was that someone who lives in a remote area, whose parents don't understand their issues and feels trapped, found some sort of relief in talking to me.

When you appeared on the cover of Dossier Journal in 2011 wearing makeup and curlers while exposing your chest, the issue was censored at Barnes & Noble and other retailers. What were your thoughts on the controversy?

I just feel like controversy kind of follows me, even where it doesn't need to be. It was so unexpected, and I found it laughable. My view on the whole situation is that I don't think the image is offensive, whether it was the top of a girl or the top of a boy. I don't think it should have been censored either way.

Another recent controversy was when FHM listed you as number 98 on its "100 Sexiest Women In The World" story. They subsequently removed you from the list and issued an apology.

I found it as flattering as any woman would. It's great, but I never thought that I would become a sex symbol. To be seen like that is exploring another type of beauty, being accepting and breaking a boundary.

Do you ever feel like you're being hired just for the media attention that follows you or some kind of shock value?

I bring a lot of media attention to a brand, and I guess the "cool" factor or whatever, but I think that's just part of what I can bring to a brand. At the end of the day, it is a business and if I sell clothes, then they'll hire me.

Who are some brands you would love to work with that you haven't yet?

I would love to work with Covergirl. And Playboy would be great at some point.

What is it about Covergirl and Playboy that makes you want to work with them? I think that they are just so mainstream and such a part of American culture. It would be nice do things on that scale, because from the beginning of my career, I was thought to be very high fashion and very limited. It would be a way to break that mold, just by selling bras.

You were once quoted as saying that you would have a sex change for Victoria's Secret, do you still stand by that?

(Laughs) Yes I do. Definitely.

In all seriousness, though, is a sex change operation something you plan on doing in the future?

I like to keep all options open, but I like to think that is a personal thing. I don't talk about that very much.

I'm sorry for prying. No, it's fine. A lot of people ask.

Even though you live your life in the public eye in a lot of ways, you also keep your personal life private. How important is it to you to keep people wondering?

When it comes to my modeling career, it's all about the mystery and the whole boy-girl, being in between genders and things like that. Later on, if I ever become a celebrity, that may change.