Inspired by one professor's infectious enthusiasm for Emily Dickinson, Obsessed is a new HuffPost Culture series exploring the idiosyncratic, all-consuming passions of public figures and unknowns alike. Through a mix of blogs and interviews, these pieces will highlight the elusiveness of whatever it is you just can't live without -- whether it's blue jays, Renaissance fairs, fan fiction, or in the case of David Lynch, coffee. If you have an obsession to share, drop us a line at culture@huffingtonpost.com.

When Andrew Bird was a fourth grader, he stared at a map of the world in history class, and Greenland stared back. The lonely island, population 57,695, was so massive it was scary, and he stood transfixed.

Bird's long-lingering whistle would be perfectly at home in this least densely populated country in the world, so it's no surprise the multi-instrumentalist has since written a song about "Dear Old Greenland," as he's done with other childhood fascinations -- an eighth-grade fixation on Scythians, "the lesser-known archers and horsemen in the Russian steppes," now lives on in "Scythian Empires."

Greenland and Scythians don't have much in common aside from their relative obscurity, but the two reside in the same corner of Bird's brain -- a place where the known and unknown can coexist. His lifelong preoccupation with maps also lies somewhere in here, caught between the tangible location, and the idea of what lies beyond it.

Somewhat counterintuitively, Bird's interest in maps has more to do with the unmappable -- outlines of neglected island nations, mainly, whose histories haven't been wrapped up neatly, and leave more to the imagination than they reveal. His music has always found a home for the world's unattended tales, and more than ever -- on his just-released album, Break It Yourself -- he's bringing his Greenland-sized stories down to a more human level.

A quiet, reflective Bird spoke to The Huffington Post by phone about making the macro micro, getting lost in maps, and why the less you know about a place, the better.

As a man with many different fascinations, what is it about maps in particular you find interesting?

I've always been fascinated and stared at maps for hours as a kid. I've especially been most intrigued by the uninhabited or lonelier places on the planet. Like Greenland, for instance, or just recently flying over Alaska and a chain of icy, mountainous islands, uninhabited. I don't know why it intrigues me so much, I can just stare at it for hours, especially the islands.

Have you visited these places that fascinate you?

I've been to the Arctic Circle years ago on a fishing trip with my dad, in the northern territories of Canada, and got to swim in the Arctic Ocean. There's a little bit of, 'I'd love to go there,' but I'm perfectly content to stare at the map.

I was just playing in London on this boat that was on top of Queen Elizabeth Hall that's modeled after Joseph Conrad's "Heart of Darkness," and there was all this nautical equipment and all these maps of the Congo River. And there's this one book called, "Atlas of Remote Islands," by Judith Schalansky, and it was a really engrossing book because it would give a map of these tiny little islands, and they don't have a population at all, and give a description of the island that's kind of poetic (see images below).

Does the idea of kind of getting lost in a place interest you, because it sounds like these places aren't all that mappable?

Maybe it's just, I've always been to the less traveled places, in any topic, whether it's history, I always like to just choose the most obscure topic. And I don't know why I have that impulse. I can't really explain it but I've been doing that since I was a little kid. But yeah, it's a sense of the places that haven't been tread so much. When I go to Europe, I feel kind of an oppression knowing that so many feet have tread over the earth and I feel like the ground is more dense because so many armies have walked over it.

So you don't like that feeling when the space has too much density to it?

That feeling of, "I've been here, I did the exact same thing last time," that happens all the time when you've been on the road for 15 years, and that's so disappointing. You travel with the hope that something unexpected will happen. It has to do with enjoying being lost and figuring it out and the satisfaction. I always get a little disappointed when I know too well where I'm going, or when I've lived in a place so long that there's no chance I could possibly get lost.

Do you collect maps?

I don't really collect much of anything, I don't have that fastidiousness to collect things, but I've got my grandfather's map, I have a couple blown, and I especially like the topographical ones where you can feel the mountain ranges. I remember just being obsessed with the Alps, the Himalayas on the globe where they would stick out.

Using a map can also be a solitary pursuit -- is that part of the draw?

I think so. Like I said, I get more involved in the map and the relationship of imagination, and you forget to look at the physical environment you're actually in. My being drawn to maps is so intense that that sometimes happens. And it's why I like history so much, too. I like to look at the map and imagine what it's like on the ground. It's a little anticlimactic to actually be there.

Do you remember the first map that struck your interest or affected you as a child?

My grandfather had a map that I have now from National Geographic, and I had it framed. It was from an issue of National Geographic that was during the beginning of the second World War, so they were actually drawing the lines after Germany had been annexed, you know Czechoslovakia, Poland and everything. And so Germany is just enormous, and it shows the Axis of Powers. There was also still the colonial era going on, so Africa and Southeast Asia are pretty different, as was the Middle East. And it's pretty interesting to know also that the cartographers were trying to go with the flow of what was happening in the world.

I also remember being in fourth grade, history class, and just looking at a map, where they take the globe and spread it out, and it made Greenland look just huge. And I just kept looking at Greenland, I don't think I was paying attention to anything else, and I remember feeling this scary vastness. And I ended up writing a song about that.

No, it goes way back to Swimming Hour, a song called "Dear Old Greenland," talking about how I felt about Greenland.

Speaking of "Armchairs" though, there's a line about being "a cartographer of the tangles in your hair." Does that line stem from an interest in the unknown and mapping that out?

I feel like there's a sort of stigma with using maps and looking like a tourist. Do you ever feel that way when you use a map?

Yeah, it can lead to an assessment of the friendliness of the place you're at when you have a map out, whether people will offer their help. I can remember being lost in an enormous park in Rome and having a map out and just being like, 'where the hell are we?', and these nice people came up and told us we were way off track. But no, I don't worry about looking like a tourist. Maps, compared to the more insidious types of GPS, which are going to [cause] the internal compass to be just useless.

How do you feel about newer technology like Google Maps? Do you find value in that, or do you have a more romantic attachment to maps?

I would say I'm more romantically attached to the actual physical maps. Though the Google Earth stuff is pretty cool, where they actually put out a satellite, photography of the planet, there's something OK about that. And I've been known to use Google maps. The GPS when driving is what I think is kind of a bad trend.

Have you found that you've come up with ideas for your music while getting lost, or has anything come from that creatively?

A day off after a show with no agenda in a foreign city is about the most fertile creative situation I can imagine. Just walking with nothing to do, killing time and hearing the sights and sounds of an unfamiliar place.

Is there particular song or thought that you can think of that has come to you in those moments?

Yeah, I'd say a song like "Tenuousness." "Tenuousness" is trying to capture the sort of confusion and chaos of constant travel, but it comes from moments of sitting up on a hill, looking at ships coming into ports.

Six years ago [I was] in Lisbon, and I was just trying to process that there's a ship coming in from New Zealand and there's high rises full of people who have tensions and I remember thinking, how does it all hang together? How does it not all come tumbling down? Of course it's begun to, now. But yeah, I was just thinking, how can the center hold? Portugal doesn't have that many natural resources. All these well-educated people without natural resources, thinking about economy really. At the time it was just a feeling. But "Tenuousness" is like, it's not going to be very much fun to listen to a song about global economy, but the song kind of captured that chaos.

Does this idea come up on your new album at all, these sorts of themes?

Let me think. Probably. "Desperation Breeds" is a little like that, but it's talking about trying to make nature conform to genetically engineered farming and deep populations collapsing, and nature doesn't like symmetry collapsing. But it comes from a consideration of geography in a way. Like, I know exactly where I got the idea for song, it was driving through hills of Spain, and all the trees, orchards, and thinking about things. But the songs are a little more like that line on "Armchairs," almost every song contains something like that. It's taking something big and taking it down to a human level.

Below, flip through images from Judith Schalansky's "Atlas of Remote Islands," along with samples of their poetic descriptions. (Reprinted by arrangement with Penguin, a member of Penguin Group (USA) Inc.)

Listen to Andrew Bird's new album, Break It Yourself, in full over at Spinner.

Andrew Bird Talks 'Break It Yourself,' And His Obsession With Maps 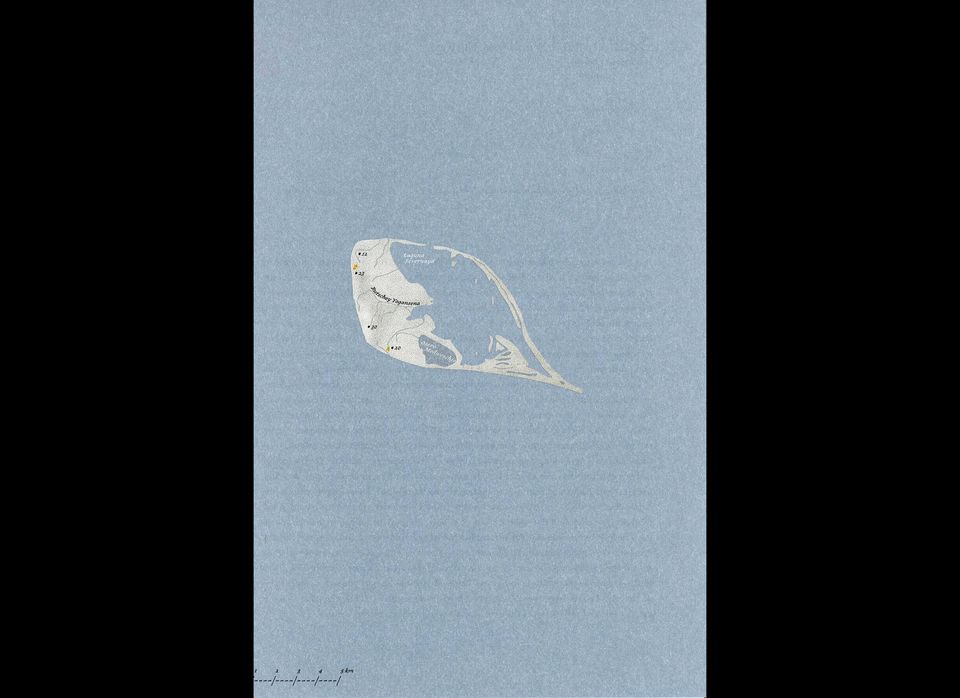 1 / 3
Lonely Island
Loneliness lies in the centre of the Kara Sea in the northern Arctic Ocean. This island is worthy of its name: it is cold and barren, trapped in pack ice all winter, with an average annual temperature of -16 degrees; at the height of summer the temperature sometimes rises to just over freezing. // No one lives here. A former polar observatory has sunk into the snow and abandoned buildings doze in the belly of the bay, facing the narrow spit of land beyond the frozen marsh. // A prehistoric dragon's skeleton was found here.
© 2009 by mareverlag