There have been plenty of attempts to "explain" Andrew Bird. Vague descriptors like "indie folk" and "baroque pop" are often applied, but they only go so far in quantifying what happens when violin, guitar, glockenspiel, and of course, that lingering whistle of his, come together.

When these elements are looped on stage, Bird is a force -- one that's been more absent from the touring scene since his latest record, 2009's Noble Beast. He's spent the last couple years recording off his farm in Illinois, and fitting in time for a sonic installation, "Sonic Arboretum," at the Guggenheim Museum. Bird is slowly picking his 2011 tour up with a performance Friday night, backed by his band, to open the Celebrate Brooklyn! concert series. I caught up with him in advance of his performance to discuss whether he prefers performing solo or with a band, if he ever loses it on stage, and why sometimes he'd rather put down the instruments and dance. 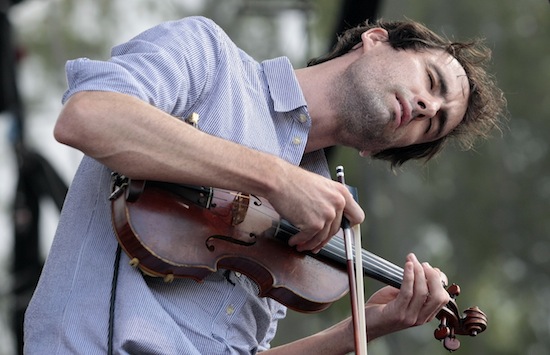 Can we expect to hear any new tracks this Friday?

Andrew Bird: Yes, for sure. I'm deep in the final stages of the new record, so the new stuff is fresh.

Could you explain a bit about your process when you're on stage? When you're looping all your instruments, the sound that emerges is surprisingly symphonic for one person. But does it ever get a bit stressful playing a game of instrument tag, where you might lose track of any one element?

AB: Nothing is too grave a mistake when I'm looping. I almost look forward to the glitches to see how we can get out of them. So long as I nail the first loop rhythmically -- if i don't, my drummer will give me a funny look saying "this ain't gonna work." Then from there on there's so many layers being added that your mistakes will eventually get buried. If I'm by myself, I'll enjoy the elastic nature of a lopsided rhythm. I have one old song I do ["Why?"] where I get so far back on the beat that I'm in an entirely different continuum.

I've seen you perform as both as a one-man orchestra, and with a back-up band -- do you prefer performing solo, and being in control of all the elements, or letting others take over some parts?

AB: I do enjoy playing solo perhaps more, but it's emotionally and physically exhausting, and a huge part of making music is social. All the folks I play with come from jazz backgrounds or at least appreciate spontaneity within the parameters of a pop song. I just try to do what I do solo, and they listen and find their nook. Invariably, the number of people on stage lends itself to sticking to a script somewhat, and we do whatever we can to avoid that feeling. Yeah -- sometimes I wouldn't mind putting down all these instruments so I can dance.

Do you view your songs as flexible works? For example, when you turned "I" into "Imitosis" -- did you always plan to build on that track, or were you inspired down the line to take it in a different direction? What I'm getting at is, in general, do you feel like you could take your songs any number of directions, or, once you get inspired, do you usually have a clear idea of what path you want to take?

AB: I'm always improvising. Not in the "let me take you on a journey" way, but "to find a melody" way. So for example, the song "I" is a template that generates and houses countless improvised melodies that get distilled into the recorded "Imitosis" that continues to evolve to this day. This insures that if you ever get bored with your own music, it's your own damn fault. Anyone who writes a tune with a melody or riff had to have improvised it at least once, right? Just because it's on your record doesn't behold you to it.

Have you ever been unsatisfied with a finished product? Is that why you might revisit it down the line?

AB: No, it's not dissatisfaction that inspires me to tinker with my songs, it's just restlessness. I'm about 95 percent satisfied with my back catalogue.

Which do you typically write first -- the music or the lyrics, and how does one inspire the other?

AB: Music is almost always first, and I'm often tempted to leave it instrumental. But something happens over time with a melody I really like, where to really give it weight I need to sing it, and for that I need words.

You make some interesting word choices in your songs. How much of that is driven by the sonic nature of the words, as opposed to the meaning? For example, on "Souverian," it lends a nice sonic quality when "souverian" meshes into "so very young," but was that choice more for aesthetic value?

AB: Not all my songs are like this, leaning toward sound over sense. Many are pointedly about something. But the word "Souverian" started resonating in my head for no apparent reason as does a melody. I try to pay attention to things that reoccur in my consciousness. Why not a new word? Someone came up with melancholie after all. One with no baggage. One that hasn't been used in a lie yet.

Your songs often have an almost atmospheric presence, so they seem to be a natural fit for film. After doing the soundtrack for Norman, do you think it's something you'd do again?

This was a while back, but I wanted to ask you about your experience on the take-away shows you did for La Blogotheque, where you performed walking through the streets of Paris. Was this uncomfortable, or was the reaction mostly welcoming from passersby? Conversely, do you think art is only fully recognized when it's put in a context that defines it as art, whether that be a concert, museum, etc.?

AB: Well. My guard was up at first. Folks on the street were more responsive than I'd expect. I've done my share of busking, and it's fun until it isn't. There are musicians in the subways that will make you cry they're so good. They'll never be on Pitchfork or on the festival circuit, and that's no great injustice. It's OK. Since Blogotheque there's been a lot of imitators looking for content providers to help sell ad space. It's good to be wary these days.

I know you get a lot of your inspiration from nature, but is there anything else in your life that's had as strong of an impact on your songwriting?

AB: Before nature, it was childhood and science; and before that mental illness. I'm still on a nature trip, but I'm on to something else as well.

What has most inspired you on your upcoming album?

AB: Love, regret, the pursuit of happiness -- it all tends to reveal itself much later.

What have you been primarily working on for the past couple years, and what can we expect to see from you in the near future?

AB: I've mostly been workshopping the Sonic Arboretum, which will be at the MCA [in Chicago] in December. I can't tell you exactly when the new record is out, but I can say it's got a real live band energy and some pretty rippin' leads.