This is the second installment of Project 24, a series that documents the lives and work of millennial artists based in New York City. As a collection, these portraits explore how the latest generation of contemporary artists operate in their relative intersections, navigate New York's dynamic art scene and adopt hybrid forms of visual expression. For other artists on our radar be sure to check out HuffPost Arts. 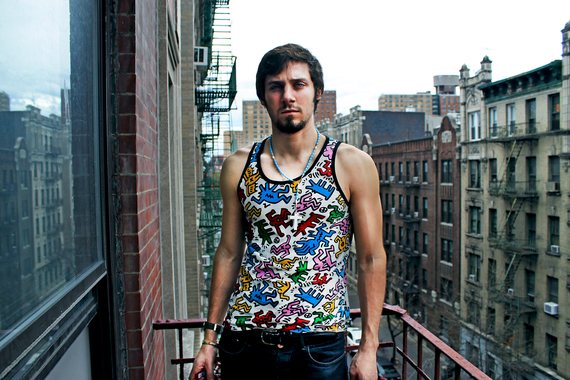 Our morning started with a hunt for acetate.

It was warm for late December, and as Kaminski pointed out, the whole of Harlem seemed excited by the winter heat wave. He opted to enjoy the weather with a tank: Keith Haring.

He walks fast, always half a pace ahead, back slightly hunched. "Could you let me know me when I'm slouching? I'm trying to break the habit." I reassured him I would.

In a neighborhood that's one-part gentrified, another part New York, Kaminski acknowledges his surroundings with a familiarity one would have with home -- an impressive adjustment for a recent transplant from upstate. And the locale seems to share the sentiment: The corner deli, for one, only has affection for the guy. 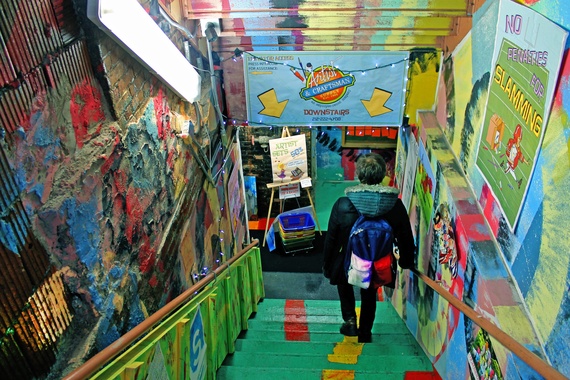 Two art shops later and we're en route to his studio. His step is slower this time, and he speaks a little more carefully, explaining his day-to-day rituals. He tells me about his daily drawings, his side teaching gigs and his family. And then we pass a church.

"Do you mind if we go inside? I want to get a little bit of that spiritual energy."

To clarify, Kaminski is a far cry from your garden-variety churchgoer, but the occasional visit isn't entirely uncharacteristic. Alongside art, Kaminski is bound on a spiritual quest of-sorts prompted by a broader commitment to connectivity. Sparked by a darker time in his life, Kaminski cites his rediscovery of faith as a crucial component to his recovery. And in the process, he identified the vast potential for connection made available through spiritual channels.

Now, a self-identified Christian-Buddhist-Jungian (a triptych he designed himself), the spirituality he keeps informs a great deal of his work and philosophy. As much a fountainhead for inspiration as it is a guiding force, Kaminski actively maintains a healthy relationship to his faith. 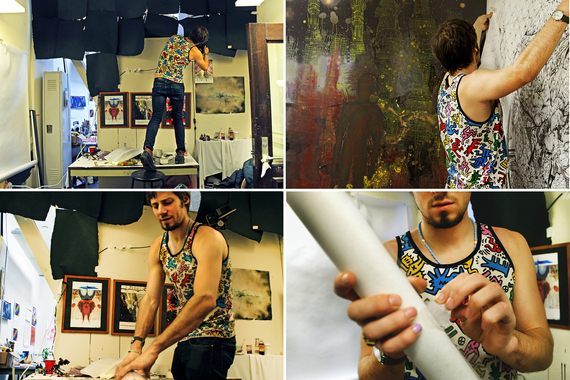 As a Master of Fine Arts student at the City College of New York, Kaminski is entitled to a campus studio. A modest space, the full stretch of his walls are decked with paintings and preparatory sketches devoted to his final thesis exhibition.

He clears a portion and primes the space for our shoot.

"Live art shows," as Kaminski calls them, are real-time recordings of his work projected onto large screens (see video below). Typically accompanied by trance-like, electronic sounds, Kaminski exploits the fluidity of watercolors and other wet mediums to produce mesmerizing visual experiences often described as "trippy."

Its inherent dynamism is reminiscent of the action art movement, if not an homage to it altogether. In a refreshing albeit nostalgic way, there's a vitality to the process that's reminiscent of action art. And he's taken the show to stage, performing at public venues including Chelsea's Marquee nightclub and Harlem's Red Rooster. 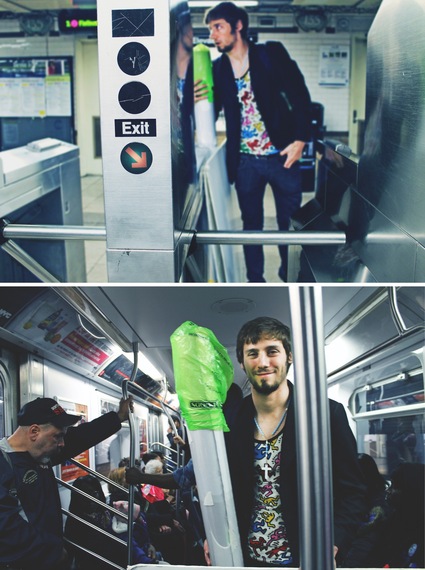 But his engagement with public audiences doesn't end there. Taking to the streets is a strategy Kaminski admits he adopted since moving to the city. With drawings mounted on large styrofoam panels, he frequents a number of subway stations and sets up camp, pencil in hand. His reasoning? "For people to see what I'm working on." 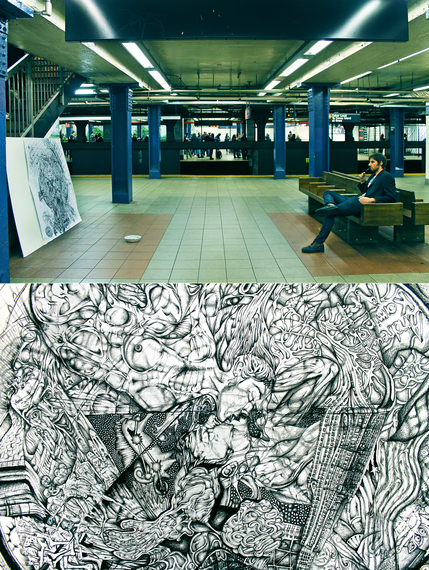 Like most artists, the horizon always looms closer for Kaminski. And as his MFA program -- truly the last bastion of haven for artists -- approaches its end, anxiety about the future only intensifies.

"It comes in waves, really. Sometimes I'm really scared, sometimes I'm really confident. Sometimes there are moments of clarity when I want to change peoples' perspectives and I know that's totally within my reach. I used to want to affect millions of people, but now I know that I can touch one person at a time and when I see how much I affect them or how important my art can be, it's all worth it."

To learn more about Kaminski, head on over to his official website. But before you do, be sure to watch a video of his live art below.