His fine work on "Girls" and the underappreciated "New Normal" might endear him to TV audiences nationwide, but Andrew Rannells proved he's still every bit a Broadway leading man when he took the stage before a capacity crowd at New York's Carnegie Hall.

The 35-year-old actor, who nabbed a Tony nomination for "The Book of Mormon" in 2012, joined fellow Great White Way veteran Stephanie J. Block ("The Boy from Oz," "The Mystery of Edwin Drood") to present "On Broadway" with the New York Pops March 21. Together, they performed a musical set featuring songs by the likes of Stephen Sondheim, Stephen Schwartz and Rodgers and Hammerstein.

The one-night-only performance featured showstopping number after showstopping number seamlessly interspersed with Broadway overtures and orchestral suites performed by the Pops (conducted by Steven Reineke). Rannells steered clear of the "Mormon" songbook and his well-received turn in "Hairspray," but his take on "Being Alive" from "Company" was a revelation, as were two songs from the lesser-known musical, "The Man of No Importance."

Check out photos from the performance, then scroll down to keep reading:

Block's considerable belt was in fine form throughout the evening, particularly on "Don't Rain on My Parade" from "Funny Girl" and "Meadowlark" from "The Baker's Wife," which opened the show's first and second acts respectively. The night's biggest applause was saved for the conclusion of the show; few audience members remained in their seats when Block offered a ruthless, soaring take on "Defying Gravity" from "Wicked."

Rannells and Block teamed up for three inspired, if traditional, duets from "Carousel," "Sunday in the Park With George" and "The King and I," and if their playful banter in between numbers was any indication, the pair would feel perfectly at home as the lead stars in an old-fashioned, song-and-dance musical. 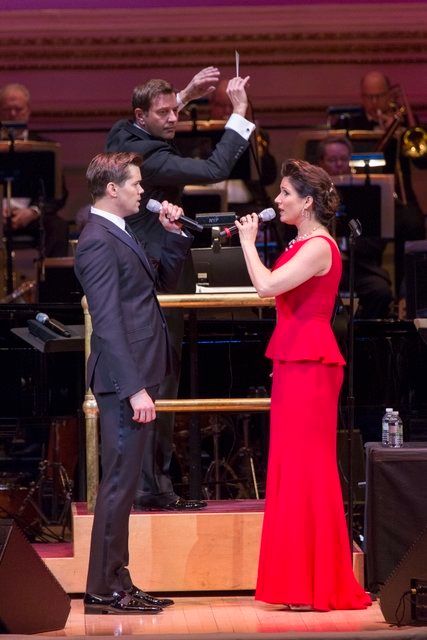