"There is no such thing as reproduction," Andrew Solomon writes -- an opening sentence that may well displace Dr. Spock's "Trust yourself" as the most important parenting advice in history.

"When two people decide to have a baby, they engage in an act of production," the author continues in his newest masterwork, "Far From The Tree: Parents, Children, and The Search For Identity." "The widespread use of the word reproduction for this activity, with its implication that two people are but braiding themselves together, is at best a euphemism to comfort prospective parents before they get in over their heads."

At its most sweeping, his is a book of advocacy. His goal is to shift the lens on what we have long seen as something a "victim" has "lost" and see it instead as a quality intrinsic to who they are. "Everyone has a defect, and everyone has an identity," he writes, "and they are often one and the same."

In chapters on deafness, dwarfism, Down syndrome, autism, schizophrenia, prodigies, children conceived from rape, children with criminal minds and transgender children, all life-changing conditions, but none fatal, he looks at these differences as identities -- communities -- not illnesses. To view them otherwise, he argues, is to reject the individuals who have them.

"If we give a deaf person hearing, are we releasing him into fuller selfhood, or compromising his integrity?" he wonders. "Does reforming a criminal's mind give him a more authentic self, or just one that suits the rest of us? Most parents suppose that an authentic nonautistic self is hidden inside autistic people, but (many) with autism do not see anyone else inside them, any more than I would see a straight person -- or a pro football player -- locked away within me."

Or, as he quotes one adult with autism as saying :

When parents say 'I wish my child did not have autism,' what they are really saying is 'I wish the autistic child I have did not exist, and I had a different (nonautistic) child instead.'...This is what we hear when you pray for a cure. This is what we know, when you tell us of your fondest hopes and dreams for us: that your greatest wish is that one day we will ceause to be, and strangers you can love will move in behind our faces.

This book took 10 years to write and includes interviews with 300 families. His conclusions: that society is persecuting, marginalizing and misunderstanding qualities that should be both accommodated and recognized, instead, and that attempts to cure many conditions is really a desire to eliminate a way of being. In that way, "Far From The Tree" is certain to be controversial, and many will think he overreaches in describing so many things as a community to be celebrated rather than "fixed."

Nestled in this vast work, though, is a smaller more intimate one. It is, as one reader described it to me, "a love story about parenting." Solomon views the journey of his subject families -- from denial to understanding, from confusion to acceptance -- as one that every single parent takes, whatever the health or abilities of their children.

"Parenthood abruptly catapults us into a permanent relationship with a stranger," he writes. And the coming to terms with that fact, the acceptance of that person who is never as you expected they would be, the loving them because of their differences and seeing the world anew through their eyes, all of that is what makes us parents.

Solomon has a broad goal for his book -- to examine how parents of the most different of children make their journey. Because, he believes, therein lies the way for all of us in a society that, at the moment, reflects "xenophobic times," where different ("women, LGBT people, illegal immigrants, the poor") is seen as less than.

Looking to families of children who are outliers for "understanding how they came to think well of their own children, may give the rest of us motive and insight to do the same," he writes. And that universal acceptance is the only way for marginalized groups to have the lives they deserve.

But here, too, Solomon also tucks a smaller goal: to help ALL parents see that the essence of parenting is to understand that they are not you. You are responsible for their safety, but not their soul. Your job is to shepherd them toward themselves, not toward who you hope them to be.

In the chapter "Transgender," a Montana mother gathers friends and relatives together after her husband's death to share what has long been a secret -- that her son, Paul, has been living for years as Kim, and, after an estrangement from her family and absence from her hometown, will be back for her father's funeral.

"I'm not responsible formy child and who she's become, but I am responsible to her," Kim's mother says as she spreads the word, "and she is a wonderful person. I love her. I don't know if you need to know anything else, but that's all I need to know."

Solomon wants us to see that that should be enough for any of us. 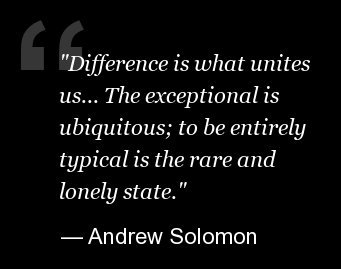