Written by Andrew Zimmern, this story first appeared in the November 2012 issue of Guideposts magazine, a monthly publication, founded by Rev. Dr. Norman Vincent Peale, that provides hope, encouragement and inspiration to millions. Download of a condensed version of 'The Power of Positive Thinking' absolutely FREE. 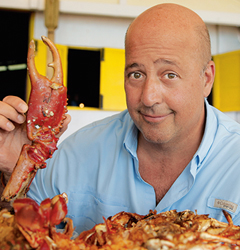 I sat down on the bed next to Jimmy, this small room at the veterans residential care facility the only thing between him and the streets of New York City. His demeanor was guarded. He smiled, but his eyes were tired.

I knew he thought there was no way I could understand what he was going through, but when I looked at him I saw myself -- like I was looking in a mirror.

I get asked to speak to a lot of different groups, one of the best parts of my job hosting a show on the Travel Channel, Bizarre Foods with Andrew Zimmern. I take viewers to the far corners of the globe and introduce them to other cultures by exploring the foods they eat -- at times, pretty strange stuff.

If there's one thing I've learned after a lifetime of dining on delicacies like blood pudding, sea squirts and camel kidneys, even folks who wouldn't come within 100 yards of a Cambodian tarantula want to hear what it's like to chomp on one!

That, ostensibly, was why I was here. I was speaking at a fund-raising gala for Services for the Underserved. SUS helps people with developmental disabilities, HIV/AIDS , the mentally ill and homeless veterans.

It's an organization devoted to supplying housing and supportive services to all of the underserved communities of NYC. I'd come into town on the early side so I could tour their residential facilities for veterans.

I'd met Jimmy in the common room. We struck up a conversation and I asked if I could see where he lived.

"I've made a mess of my life," he said. He told me how for years he'd struggled with physical and emotional problems, lost his marriage and his business. "I had nothing to live for. It just seemed so hopeless before I got help here at SUS."

I thought back to that day in New York City, early January of 1992. I'd checked into a cheap hotel with a case of vodka in large plastic bottles. "I had a plan. I was going to drink myself to death," I said. Jimmy looked at me, his eyes wide.

I was 30. Everyone, my friends, my business partners, my family, had wisely turned their backs on me. My once-promising career as a chef and restaurateur was trashed. I'd spent most of the previous year squatting in an abandoned building, living with other drunks and junkies.

I didn't believe in anything or anyone, including myself, and least of all in a Higher Power. The only thing I had faith in was the bottle.

I'd dreamed of being in the food business from the moment my globetrotting parents introduced me to the foods of the world during childhood trips to Europe and Asia.

I worked my way up the food chain, beginning with summer jobs in high school, then on to unpaid apprenticeships in restaurants in Italy and France, then to restaurants back home as a cook, then sous chef, executive chef and finally to a partnership in a foodservices development company and consulting group.

Outside the kitchen my life was spiraling downward. I told myself I was in control, that I wasn't really addicted at all. I used heroin to come down from coke, alcohol to moderate the pills. I had it all figured out.

But after a decade of this, my friends, people with successful careers and families, no longer wanted to go out when I called. No longer let me crash on their couches. No longer took my calls. More and more the people I hung out with were other drunks and addicts.

Jimmy nodded. "Yeah," he said softly. "At first you don't care. You just want to get high. But then ... then it's too late." He stood up and walked to a dresser, framed pictures of a smiling family atop it. He pointed to a photo of a handsome young boy.

"My son," he said. "He's a great kid. I didn't see him for years until I got the new start here." He looked back at me and wiped a hand across his eyes.

"I know how you feel, Jimmy." He sat back down and I continued my story.

I was walking a tightrope. I got kicked out of my apartment, then another one. One morning a restaurant owner I was consulting with found me passed out on the floor of his establishment.

"This isn't working," my partners finally told me. "We're through, Andrew." I was screwing up my own life but they weren't about to let me screw up theirs.

That night I went to a dive bar, drank myself senseless, then followed a group of drunks back to the building they were squatting in, in lower Manhattan. I stayed there for almost a year, watching all hope drain out of my life. I was a loser. I couldn't take it any more.

That's when I went to the flophouse. I lay in bed and guzzled vodka till I passed out, woke up and started again. Days went by. I was down to my last bottles of booze. I couldn't understand it. I had nothing to live for. Why was I still alive?

Then one morning my eyes slowly, groggily opened. There was the bed. And the floor littered with empty bottles. But ... everything was different. I couldn't explain it, but it was as if someone turned a light on. Was it hope? Was it real?

I grabbed the phone and called the only person I could think of who might listen to me, a publisher who'd been my best friend for 20 years.

I had escaped that hotel with my life, but I was still an addict. By the time I got to my friend's house I was already backpedaling, scheming, telling him I didn't need anything more than a loan. I could fix my problems.

The next morning, not five minutes after he left for work, I broke into his liquor cabinet. This time I would stay in control.

Each day for three days he asked me what I was going to do. He asked me to meet with another friend who'd been sober for a year or two. I agreed to meet her at a restaurant for coffee. When I got to the restaurant the back room was packed -- filled with people I'd thought had long since forgotten me.

"We're taking you to the airport," one friend said. "You've been admitted to a Hazelden treatment center in Minnesota. They'll be able to give you the help you need."

Jimmy slapped his hand on the bed. "You had an intervention," he said. "Me too, once. But it didn't take."

Mine either, at least at first. I went willingly to the airport because I had nowhere else to go, but after several days in treatment I was a mess.

All I kept hearing about was a spiritual solution to my human problem, a new way of living that would put my life on a different footing, if only I could find a way to turn my life over to a power greater than myself. Seriously? I was supposed to believe there was someone out there looking out for me?

C'mon. If there was an almighty anything in charge, he was doing a pretty lousy job. So day after day I filled the pages of my workbook where I was supposed to write my feelings with one word: HOPELESS.

One day my counselor came into my room. "I know you don't believe in anything, let alone a God who is personal to you, Andrew. I get that. But you better find something you can believe in or we're just wasting each other's time here." Then he turned and left.

Were they going to kick me out? I was in Minnesota in the middle of winter! I didn't have any place to go. Suddenly, I was overwhelmed with a terrifying sense of desperation, of utter separation from the world, of complete isolation.

Once again the rules had been laid out. Find a Higher Power, and you will get well. And once again I knew that the solution to the problem would elude me.

I was from New York. I needed something real, like a burning bush.

But all I heard was the freezing wind whistling through the branches.

I went inside. It was dinnertime. I sat down next to a guy I recognized from the in-house meetings. I didn't know him well. He nodded. "How's it going?" he said. More like a grunt really. I doubted if he cared.

"Look," he interrupted, somewhat rudely, I thought. "Recovery is like a recipe. There's the Twelve Steps, there's God and there's you. Put them together and maybe you can stay sober."

I explained I didn't know how to find God, and he told me about the promises of the Twelve Steps. That by following Good Orderly Direction and the wisdom of the sober community I would come to believe. I didn't need to believe at that moment, I just needed to believe in a future where I would.

I didn't know if I should feel insulted or enlightened. There was a recipe. I could understand that. A phrase I'd heard over and over, "Keep it simple," finally made sense. Read the instructions and follow the recipe. Stop fighting it. It all came together in an instant.

"No, Jimmy," I said. "I didn't get a burning bush. I got a grumpy dude who finally got through to me by saying the thing I needed most at the exact moment I needed to hear it. It saved my life."

I put my arm around Jimmy. His eyes turned to the pictures of his family. "They haven't forgotten you," I said. "They're just waiting. Don't give up. It gets better. Way better. Even if you can't imagine how."

We walked back to the common room together. "Thanks," he said. "I'm grateful that you came by. I was a soldier once. I'm not going to give up."

I don't know what happened to Jimmy. I haven't seen him since, though I pray often for him. I am grateful every time I can share my story with another addict or alcoholic.

I am grateful to have my life back and for the friends and family who never gave up on me, for a God who was there when I was ready to find him. I am grateful for so much, that every day, one day at a time, is Thanksgiving.

Written by Andrew Zimmern, this story first appeared in the November 2012 issue of Guideposts magazine, a monthly publication, founded by Rev. Dr. Norman Vincent Peale, that provides hope, encouragement and inspiration to millions. Download of a condensed version of 'The Power of Positive Thinking' absolutely FREE.