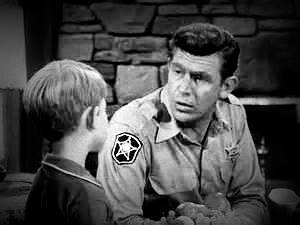 Andy Griffith always had such a good show... especially in the early days of black-and-white television. I can remember watching it growing up here in Alabama, knowing that there had to be color, not exactly understanding why I couldn't see it.

One episode I always liked was the one where Opie has a dream of getting a medal for a race he was to run in -- there are 'fantasy shots' of how he would feel when the badge was pinned on him, the people cheering, and his waving to them all. What actually happened was that Opie lost and when he is grumpy about it later, he tells Andy that he sure knows how to be a good loser.

Andy talks to him and tells him everyone knows how to be a winner -- you grin a lot, you smile, but that it is more important to know how to be a good loser. You don't lash out at others or make mean remarks or be hateful towards others.

I think it is interesting to think about how simple it was when it was in black and white. Issues were pretty clear cut, and it was easy to understand what you should do.

I think if we all can learn to be good losers, as well as good winners, then we all will be a better people -- just like Andy and Opie taught us -- and while a situation may seem black and white, we always knew that there were a multitude of colors in the show, we just couldn't see them yet.

Maybe now we can. Thanks Andy. Thanks Opie.