What long way he's come from Connecticut and anger management.

Once Steve Carrell announced last summer that he was leaving "The Office" following the now-finished season, the world wondered who would replace him as manager at Dunder Mifflin. A guest star-packed finale saw a parade of potential new hires, and after critical acclaim for his turn as the slick Robert California, James Spader netted a job -- not as boss, but CEO.

As for the regional manager? Andy Bernard, get ready for some major new responsibility. Also, good luck, and watch out for Dwight.

Ed Helms' well-educated and semi-idiotic salesman, who debuted in the show's third season, took control of Dunder Mifflin Scranton during the show's season premiere Thursday night, chosen by California after he talked Jo (Kathy Bates) out of her own job. The revelation capped a well-kept mystery, with an entire nation of fans kept entirely in the dark as to who would take over for the beloved Michael Scott.

Speaking with TV Line, Helms got into character and revealed Andy's feelings about the new position.

"Andy is a boss who is terrified of being a boss. He is making an overt attempt to step up his game. And just as me the actor, Ed Helms, is feeling pressure and excitement about stepping into a larger role like this, Andy Bernard, the character, is also feeling a hell of a lot of pressure and anxiety," he told the website. "And that is a lot of fun to watch unfold -- especially when juxtaposed with James Spader's fabulous Robert California. Andy has always struggled with a little bit of anger. And he has some real perception gaps; there's a giant chasm between how he sees himself and how others see him. In some ways, Michael Scott really believed he was a great manager. Andy's not quite there yet."

For more from Helms, click over to TV Line.

With Carell gone, Helms is the show's biggest remaining star. He featured this summer in the biggest R-rated comedy of all time in "The Hangover, Part II," and starred in his own successful film, "Cedar Rapids," earlier in the year.

PHOTO GALLERY
The Office
Download
Calling all HuffPost superfans!
Sign up for membership to become a founding member and help shape HuffPost's next chapter
Join HuffPost 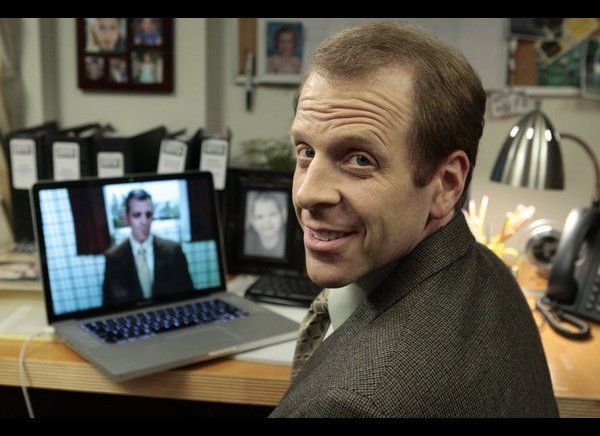