Leviticus 20:13 reads: "If a man has sexual relations with a man as one does with a woman, both of them have done what is detestable. They are to be put to death; their blood will be on their own heads."

On the same thread, he responded to a follower, calling same-sex relationships "unnatural" and suggesting that they will inherently "result in disease": 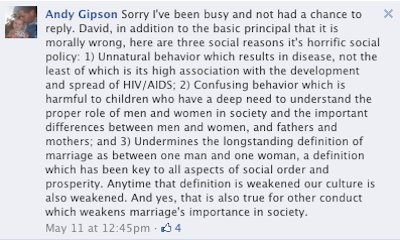 UnityMS flagged the post and issued a response to Gipson's comments:

Mr. Gipson needs to realize he represents all of his constituents. He should not cherry-pick which constituents he wants to work for. He should also realize his positions are neither popular nor Republican. LGBT individuals, couples, and families help pay Gipson’s salary. It’s important that he remember that.

While the nation's approval of gay marriage has trended upward, topping out at over 50 percent in a recent poll, a November 2011 survey found that only 13 percent of Mississippi voters thought it should be legal, while 78 percent said it should remain illegal. Even among Democrats, only 19 percent expressed support.