When I went to Mt. Everest Base Camp in 2012, I interviewed roughly 50 Sherpas and members of the climbing community. One of the wonderful Sherpas who I met was Ang Kaji Sherpa. His smile shows the Sherpa spirit. And his insights explain the unique perspective of the Sherpas.

On the day we met, April 2, 2012, Ang Kaji was on an expedition with the Northface team to attempt to summit Mt. Everest for an impressive fifth time! Ang Kaji talked about how Sherpas are more than merely porters -- a point well documented in the film I created -- which can be viewed at http://thesherpapath.com/film. He discussed how he deals with fear. He talked about service and the importance of mutual respect. "All clients are our god. We have to be honest and do our best for them. But the client has to be respectful of us too. If the conditions are not good and there is too much risk, then I cannot accept. Life is more important than money" explained Ang Kaji. 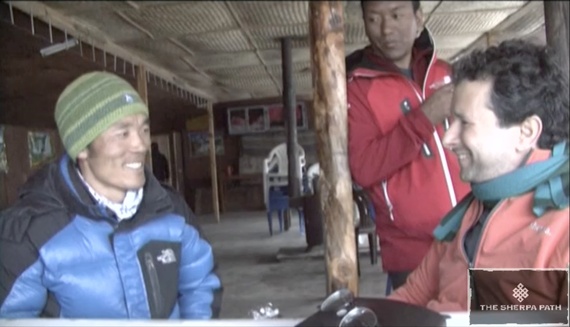 On April 18, two years and two weeks after our interview, Ang Kaji Sherpa was killed with fifteen others in an Avalanche in the Khumbu ice fall. This was the deadliest day ever on Mt. Everest. Ang Kaji left behind three small children and the Nepal government offered a mere $400 per family. The story of that tragic day and the abysmal response from the government are well documented.

My interview with Ang Kaji has not be seen before, as I recently rediscovered it when preparing for a Sherpa Path speech.

I learned a lot from Ang Kaji that day about compassion and living for the day. I hope that his thoughts inspire you too. Watch at http://thesherpapath.com/angkajisherpa/