"American Horror Story: Freak Show" features a fantastic ensemble of talented actors, but this season puts them in some of the most challenging and visually dynamic roles the series has ever attempted. Which brings us to Angela Bassett, who plays Desiree Dupree, or the three-breasted woman. Bassett sat down with HuffPost Entertainment to tell us that she really doesn't want a musical number this season and how her intersex character is in for a very big self-discovery: 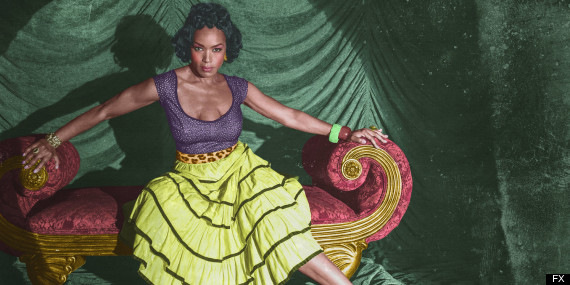 We just met Desiree in Episode 2 and found out a little of her backstory. What more can you say about her past and what we’ll see next from her?
It was up to me where she’s from. Is she from the South, is she from Detroit, or migrated North from the South? In my mind, she travels around a lot. Like, what do I want her to sound like? What’s a Detroit accent in the ‘50s? I was trying to do this kind of research.

So she met Dell at one of the carnivals. In that world, it’s less about who you are and what you look like, black or white, or this or that. You really are sort of on the outskirts, outcasts or abnormal or different or unique. You know, the most creative and most embracing of people. So these two strange individuals come together and try to forge some sort of normalcy, as husband and wife. And her dreams and desires for being normal were so huge because she was for a period of time. And then with hormone changes and this and that.

Are we going to learn more about that and Desiree being, as she describes herself, a “full-blown hermaphrodite”?
Yes, yes. That’s going to come out because she’s going to go see a doctor and she’s going to find out something about herself that she hasn’t known. She just accepted who she was and being an outcast from her family and having to make her own family, which was Dell.

She seems so confident compared to the rest of the people in the Freak Show. Do you think she sees herself as a “freak”?
I think [she’s] embraced herself. Stares and whispers, that’s just a part of being different. I think with Desiree, and what I’ve noticed with one of my other castmates, is that I know you’re gonna talk so instead of waiting for you to talk I’m gonna come out big, bold, brazen and act assured so you can’t hurt me.

Some of the crew and I have gone to see one of our cast members, Mat Fraser, do burlesque. He also does burlesque and he’s a taekwondo black belt, and he sings. He’s amazing! He just comes out at you, just bold and fun. He kind of calms you down -- here, stare, you're invited to.

Last season, your character, Marie, was such a force and butted heads with Kathy Bates' and Jessica Lange’s characters. Are we going to see that with this season?
I will a little bit. I don’t know where it’s going, but we’ve shot up to a point where I do take matters into my hand. I have a lot of fun doing it. I enlist the other women and we do it ourselves, exact our revenge. But not as much as last year. We’ll see where we’re going.

So you don’t know yet how the season will end yet?
I don’t. I’m just up to Episode 9 and it’s getting good now. But what happens after that, I don’t know. 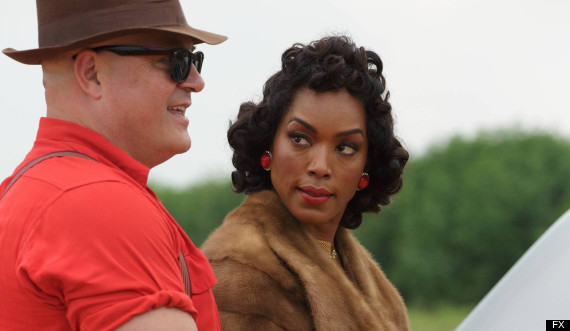 There’s been so much about Twisty and the fear of clowns. Are you afraid of clowns personally?
I [am not]. I’ve met [actor John Carroll Lynch] out of costume, and he’s a really, really nice guy. When I’m getting my boobs and stuff applied, I’m sitting right there staring at Twisty’s half face next to me. It’s a work of art, really.

What’s it like wearing that prosthetic piece?
I’ve gotten used to it now because they’ve changed it up a bit. The first incarnation was really uncomfortable, heavy and drooping. They changed it and I think it’s silicone now and it’s much lighter. But the initial one I thought, [sighs] This is gonna be bad. And if you don’t have to see it, then I just put a T-shirt with it on, or now we just cut off a third one and stick that on [laughs]. We’ve got about three different ways to go with it.

The musical numbers are great this season. Are you going to have a song of your own?
I hope not! I hope I can dodge that bullet. But if anyone was going to, it’d probably be Desiree.

This season is a lot less scarier than “Asylum” and less campy than “Coven” was. What would you say is the message or theme of this season?
I don’t know what [Ryan] has in mind, but I think it is about being more considerate and accommodating of the differences of individuals, whether they’re physical or emotional. Whether it’s who they choose to love or what choices they make, just having more compassion towards others. It’s interesting, you have the boobs, the arms, half a body, or you’re 20 inches tall -- we can’t even deal with color! [Laughs] But it’s wonderful to work with our special cast. I really wish my kids had more time to come down and be on the set and have that experience, just as a point of growth and exposure.

What about Season 5? Do you think you’ll return?
I don’t know anything yet. They probably have some idea what Season 5 will be. We’re just trying to figure out how we’ll wrap this one up.

The above interview has been edited and condensed.