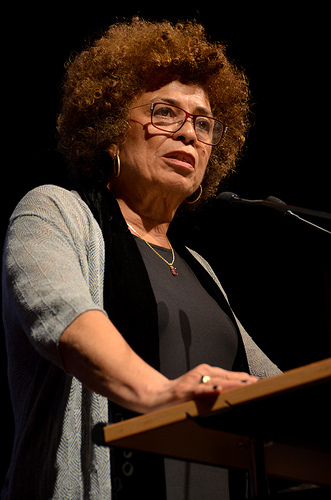 "Eradicating racism comes from addressing socio-historical conditions that have fostered a system that criminalizes communities of color," Davis said. She went on to stress the significance of internationalism--making connections across national borders, seeing global struggles as our own, as well as the importance of respecting dialogue and coming together to take a broader approach in fighting oppression. Davis said she witnessed firsthand how people around the world identified with our struggles here in the United States. "Even though they didn't speak English," Davis said, referring to citizens of Brussels, Belgium, "They were saying, 'hands up, don't shoot.'"

Among other things, Davis is widely recognized for her leadership in the prison abolition movement, being co-founder of Critical Resistance, an organization dedicated to opposing the expansion of the prison industrial complex.

Davis declared that progress in fighting racism does not come from exacting revenge on individuals. She reminds us of the fact that the BART police officer responsible for fatally shooting Oscar Grant of Oakland in 2009 served only one year.

"Would it had been better if he'd served 10 years?" she asked. "Would that have indicated that we were moving in the direction of eradicating racist police violence?"

Davis compared this to the non-indictment of officer Wilson as well. As the world waited to hear whether Wilson would stand trial, racially motivated police violence continued. Rather than an indictment or even incarceration of one individual, people around the world needed justice that would last and cried powerful demands for it.

"Why the mobilizations now?" Davis asked. Some would assume it's because so many black men and boys have been killed within a short amount of time; however, she reminded us that the issue of black men being targets of police violence is not a new occurrence, and it is important to correct the notion that it is. "There has been an unbroken line of racist police killings since the era of slavery." Davis declared.

Davis directly attributes police militarization to the war on terror, also saying that the the war on terror has redefined what it means to be an immigrant and legitimized anti-Muslim prejudice and violence. "It is important to analyze the work that the word 'terrorist' has done," she adds.

Davis insists that when addressing racism, other inequalities cannot be ignored. Racial and sexual violence are two modes of violence that have, historically, been particularly overlooked as well as allowed and accepted. "The pandemic of intimate violence is not disconnected from state violence," Davis said.

She then called upon us all to "speak out against economic exploitation, against war, against the destruction of the environment, against anti-Muslimism and anti-Semitism, against gender bias and homophobia, for access to good organic non-GMO food, for free health care and free education for all."

The event concluded with Santa Cruz mayor Don Lane presenting Angela Davis with the key to the city.