Angela Guzman’s work says something — literally. Communication has been at the forefront of her craft going back to her time as an intern at Apple when she created the iPhone’s early emoji and continuing through her stint as a design lead working on Google Assistant. You’ve likely included one of her illustrations in a text to someone recently or used FaceTime (another product Guzman worked on) to talk to someone during the coronavirus pandemic.

When Guzman came to the U.S., she didn’t speak English, so she had to find a way to communicate with others. It’s that very process that helped her create 💃 and grow her career. For Latinx Heritage Month, I chatted with Guzman about her work building the early foundations of our illustrated universal language, and how her Colombian roots have shaped the work she’s doing today.

Let’s start from the beginning.

I’m originally from Bogota, Colombia, and I moved to the U.S. when I was 8 years old. I grew up in a household of all women, with four older sisters. One of them was studying architecture when I was very little, and I remember being fascinated by her artistic ability: making models, drawing blueprints, creating little houses for her homework assignments. I used to gather all that material to play with my Barbies. She eventually taught me how to draw, at a very rudimentary level, obviously, and I developed my love of drawing at that young age.

Right there and then I figured drawing could be a way to be understood. After all, drawing is a way of universally connecting with people, and it’s something that I can just try out and see. And so it was through that experience that I really got into drawing. And that’s how I developed a way of communicating with my classmates and teachers. And eventually, as the years passed, I became known as the artist in the classroom.

When it was time to go off to college, I was like, “Well, I really love art and the creative process.” And although I didn’t fully know what career options there were in this creative field besides architecture, I was set on going to an art school. So I went off to the Rhode Island School of Design, never having been to New England or experiencing snow.

So off I went, with no gloves but with lots of expectations.

I was like, “Oh, this is gonna be challenging.” Because my high school was focused mostly on liberal arts and sciences, I felt I had a lot to catch up on once in art school. And so I learned a lot in the following years.

That’s so interesting that there’s a correlation between how you use drawing as a communication tool back when you were younger, and then you became part of the team that developed emoji.

I ended up landing an internship at Apple just before my last year of grad school. This was the summer of 2008. I didn’t know what project I would be working on or who was on the team.

On day one I was assigned my task. They said, “You’re going to draw emoji.” And I was like, “What’s an emoji?” The reason why I didn’t know what an emoji was is, at the time, the word emoji wasn’t globalized as it was tied to the Japanese language. And so as you pointed out, it was a really interesting moment because I had to go back to that childhood experience — of capturing a sentiment, action or object with very few pixels and applying it to be a language that could be universally understood.

Little did I know that this set of emojis would soon change the way we communicated on a global scale. So this experience has deeply influenced my career. 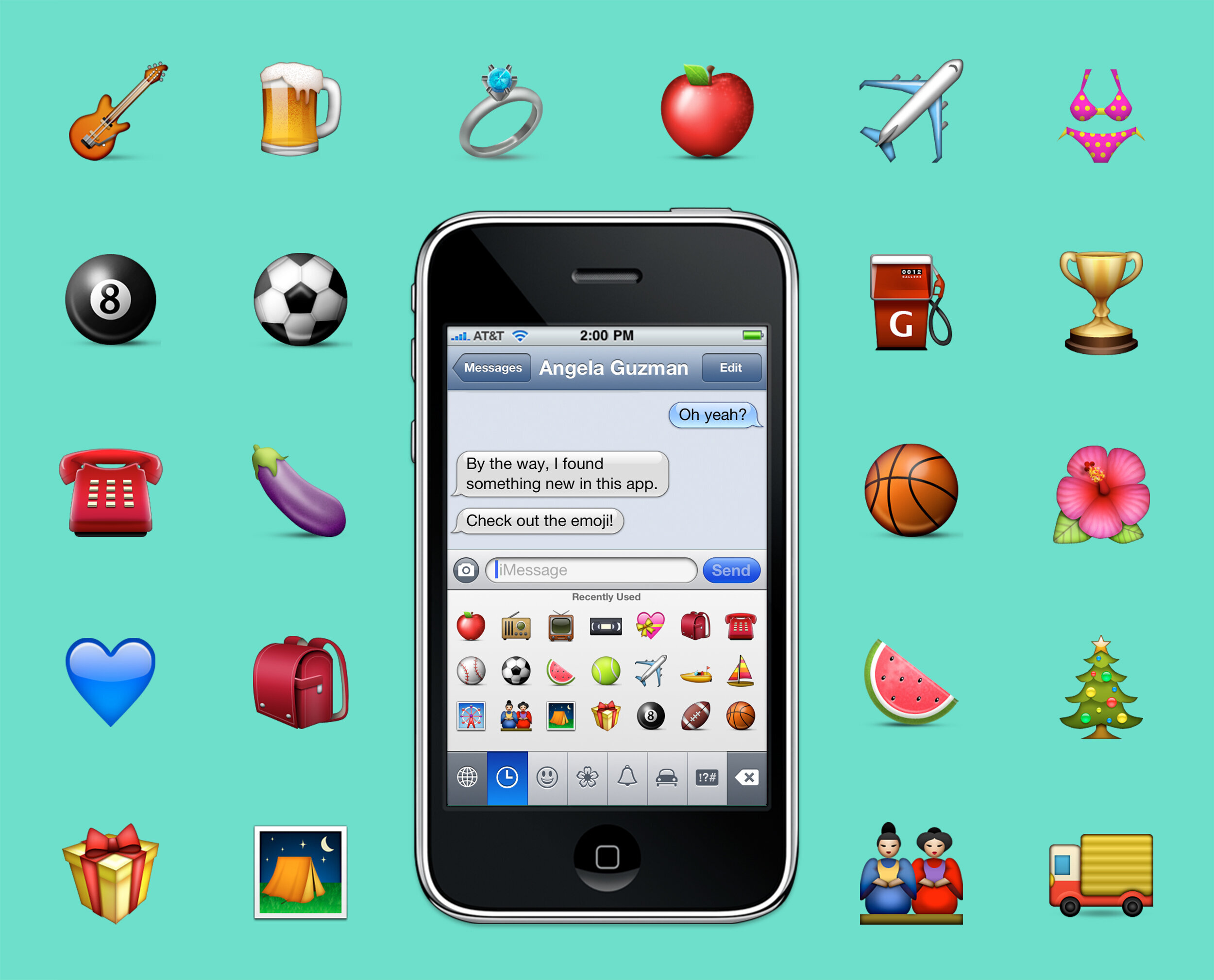 Samples of some of the emoji Guzman designed while interning at Apple. In total, there were 480 emoji that shipped as part of the original set of Apple emoji.

I think it’s fascinating to see the evolution of the emoji, not just by having the ability to choose from more options (like food dishes and facial reactions), but specifically in the area of diversity and inclusion. I think it’s beautiful to see that and I’m all for it. It’s like the progression of any verbal language. The more we use it, the more it evolves. I think that’s awesome.

Speaking of 2020, let’s talk about how you got to your career today.

I was at Apple for nearly five years. After my internship concluded, I graduated and came back full time to work on a bunch of communication products like FaceTime, iMessage and Mail (and a few more emoji). Although I didn’t pick these projects, it definitely started to pave the way for what was to come.

Even though it wasn’t an easy decision, I decided to explore other companies in Silicon Valley as I felt living in this area opened many opportunities to learn from great companies. This brought me to Airbnb because I was curious to see what it was like to be in a startup. Airbnb at the time was on the cusp of large growth so it was an awesome opportunity to learn all the things that go into building a startup.

Later on, I went to work at Google. There, I had my first official experience managing and growing a team. I worked on projects like Google Glass as well as the Google Assistant. Again, very communication-forward platforms. Before joining Google, I had this itch that I wanted to pursue my own company, but I didn’t feel quite ready so I opted to gain more experience.

Looking back, I believe that “itch” actually started when I was little. I wanted to do my own thing, so much so that I remember drawing an illustration of my future company, Tijiko.

What?! When you were little?

Yes, I found that drawing recently! I remember drawing it in fourth grade shortly after I moved to the U.S. It was a class assignment, something around the lines of, “What do you want to be when you grow up?” And you had to make a drawing of your dream job. Although at the time I had no idea that my company would be tech-based, I did imagine it had to do with design and teaching.

But what makes this childhood drawing so special is that it literally depicts things today in a very visual way: my core team, my desk, the wall phone (which I assume would have been an iPhone if it has been around back then), my long brown hair, the large window, and most interestingly the moon shining through it. The moon really captures my day to day as I generally work late into the night to wrap things up or talk to folks in other parts of the world. (We’re a distributed team since day one: across Thailand, Colombia, New York and Silicon Valley.) 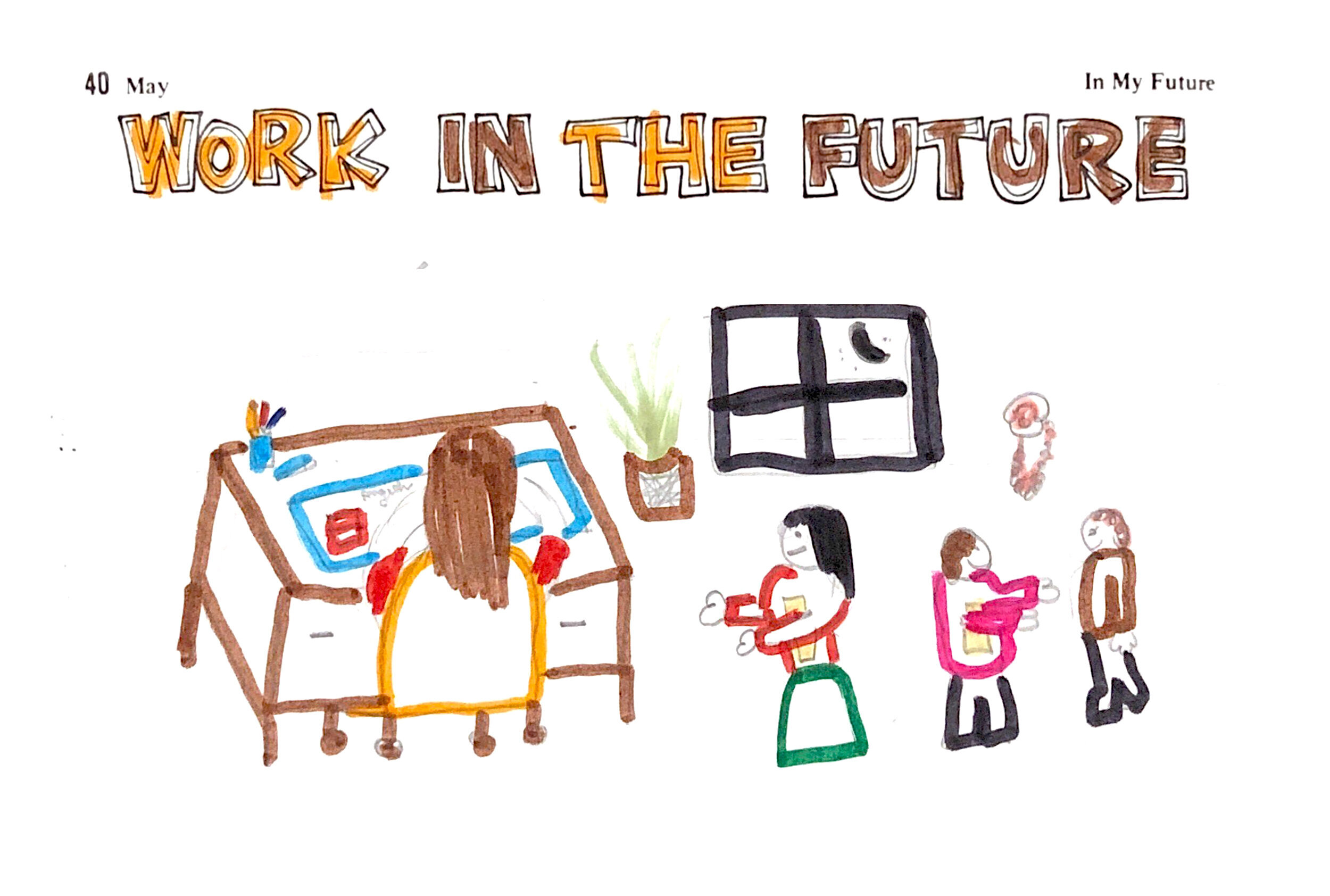 Guzman created this drawing as a child when she was asked what her future dream job would look like.

About a year before leaving Google, I started to really think about what I wanted to do next. I took my time planning this one out because it’s a big change to opt out of a very stable job with a salary to doing your own startup. Additionally, I was used to being surrounded by people in the office, and accepting that I’d be physically alone (as my team would be distributed) was something to also consider. It took me about a year to really feel like I would have no regrets leaving a great place like Google and be OK to go solo.

During the majority of last year, I explored different ideas. But I always knew I wanted to focus on three things: my passion for communication design, my desire to connect through technology, and my goal of helping people.

On a personal level, I wanted to reconnect myself with my Colombian roots. Because I had left Colombia at such a young age, I felt like I lost touch with its culture, food and music — things that I was really drawn to exploring once again. And so I was like, there’s gotta be a platform that I can build to connect us in this way, that utilizes all the skills I’ve collected for the past 12 years while working in tech, and that in turn (and most importantly) helps people by providing another source of revenue. That’s where Tijiko was born.

Tijiko is about connecting your needs with a personalized solution through real-time digital coaching. Think YouTube but totally tailored to you — your tastes, your style, your goals … your story. Our name is based on one of the oldest trees in the world, Old Tjikko. Its root system is what makes this tree ancient and why I was drawn to it. The roots pass information from one offshoot to the next so I wanted Tijiko’s platform to be the same.

We are currently in beta offering sessions in areas like childhood education (including support for parents dealing with remote learning for their kids), cooking, life coaching and other lifestyle categories. It’s been really interesting to see this evolution and put all the things that I’ve acquired throughout my career into a new form. 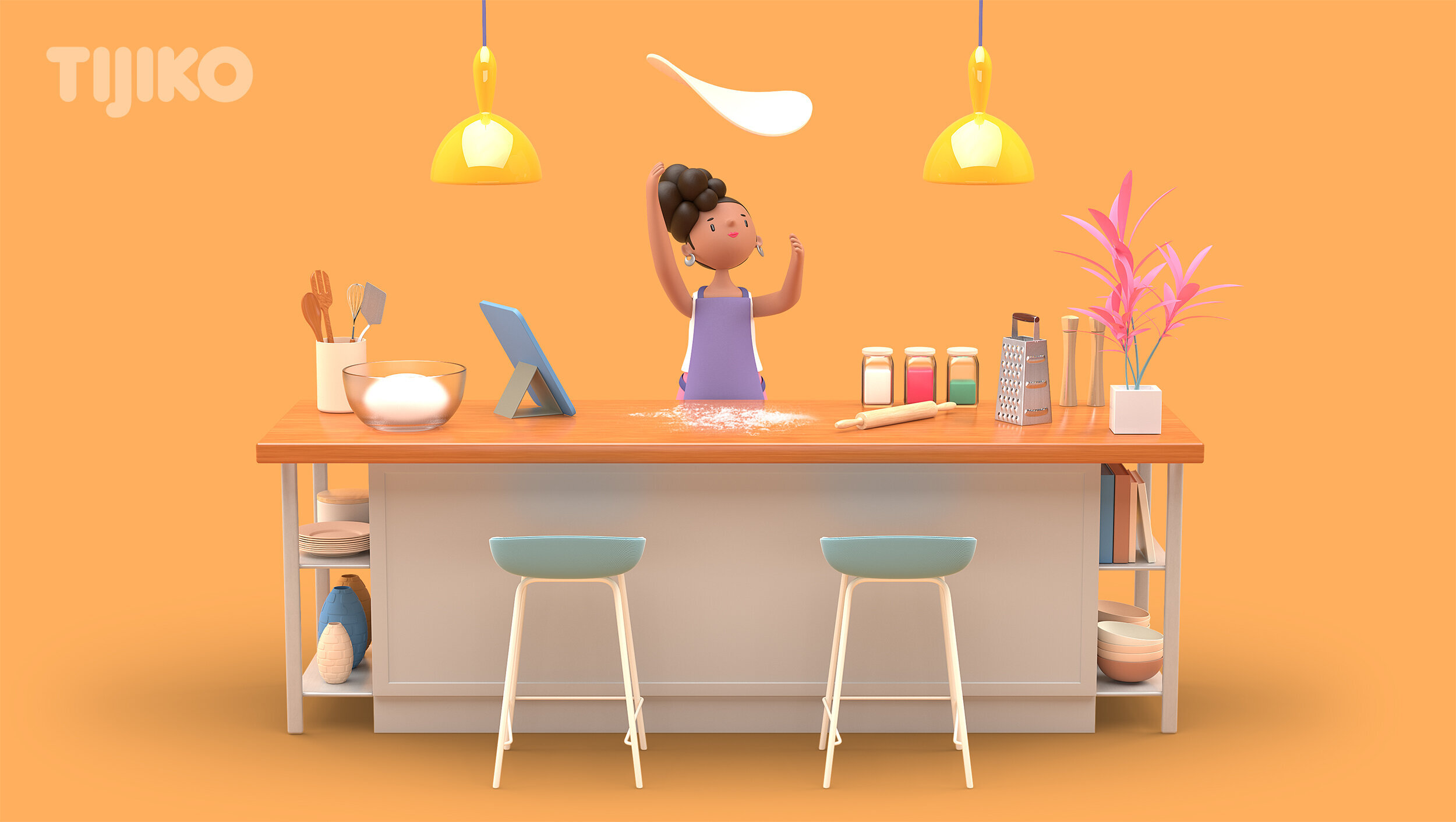 A Tijiko illustration depicting someone learning to cook, which is one of the categories Tijiko offers as part of its umbrella of digital coaching experiences.

And then the pandemic arrives. Given the fact that part of the drive of this company is to coach, has the pandemic steered the company in any new directions?

I wanted my team, regardless of our size, to focus on helping as many people. As I had previously mentioned, it’s been one of Tijiko’s missions since day one. When COVID-19 arrived, the first thing to cross our minds was how can we offer our platform to help more people; and the last thing to cross it was how this pandemic would hit close to home. A couple of my sisters actually lost their jobs overnight as they were in the education sector.

One of them was a tutor, so she lost all her students in one day. I felt terrible, and wondered how was she going, you know, to move forward? I decided to add her to Tijiko’s platform. She was able to transition into the digital world very easily. I’m personally very excited to be able to help her directly. Not only did she reconnect with many of her former students, but now she is teaching internationally. So yeah, there’s a way of feeling lots of reward toward bringing those connections alive.

But on the other hand, some of the things we also focus on are our social good initiatives. We offer free services to those who need them most. For instance, we partnered with a renowned Colombian foundation called Fundación Acción Interna to support the population deprived of liberty and their role as an integral part of society. Together with our beauty educators, we offered personalized digital makeup classes to 14 women in the process of resocialization. All of this was done remotely as I never physically stepped a foot in Colombia, and instead relied heavily on my team based there. It was really, really beautiful.

It’s interesting to see the trajectory of your career, hitting this moment in a way and just using your toolkit to move forward.

It’s definitely how I feel. I am a strong believer that you have to be fearlessly forward in your approach to life while acknowledging that things often happen for a reason.