Angelina Jolie Pitt gave a powerful speech on June 11 at the biannual African Union Summit, using her star power to draw attention to women's rights across the globe.

According to The Independent, the actress and activist addressed a group of delegates in Johannesburg, South Africa, including African Union chairwoman Nkosazana Dlamini-Zuma and British foreign minister William Hague.

Her speech focused on the need for the global community to address the violence and human rights violations that impact women and girls around the world.

"There is a global epidemic of violence against women -- both within conflict zones and within societies at peace -- and it is still treated as a lesser crime and lower priority," Jolie Pitt said.

"Women and girls are bearing the brunt of extremists that revel in treating them barbarically," she added. "This is inextricably linked to our overall failure to prevent and end conflicts worldwide, which is causing human suffering on an unprecedented level."

The 40-year-old actress and Special Envoy of the UN High Commissioner for Refugees finished her address by offering solutions to the ongoing problem.

"We need policies for long-term security that are designed by women, focused on women, executed by women," Jolie explained, "Not at the expense of men, or instead of men, but alongside and with men." 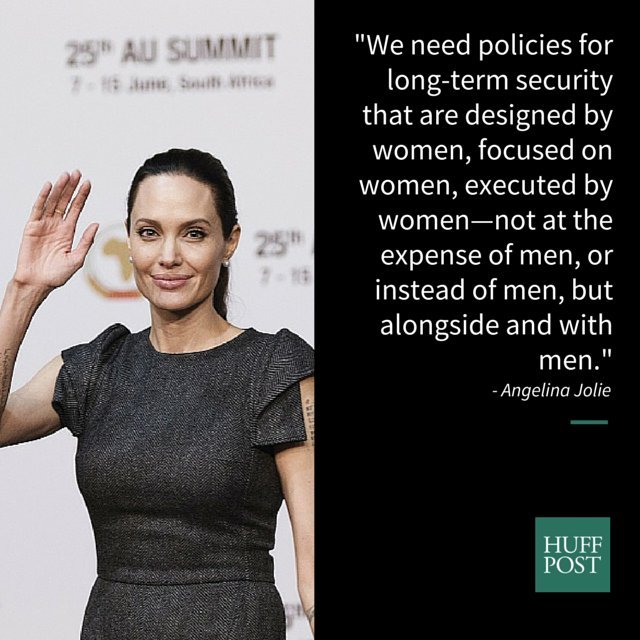 Jolie Pitt spoke to the critical need to engage men in the global women's rights movement, which begins at the individual level. "There is no greater pillar of stability than a strong, free and educated woman," she said. "And there is no more inspiring role model than a man who respects and cherishes women and champions their leadership."