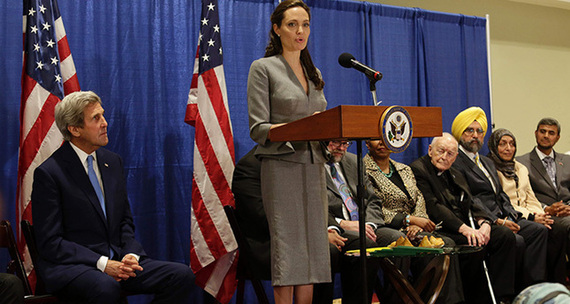 The All Dulles area Muslim Society Center held an event on June 20, 2016 to mark World Refugee Day. John Kerry and Angelina Jolie were guests on this occasion. Jolie spoke to an enthusiastic audience of ADAMS community members.

Yes, she spoke to a mixed audience of men and women. And no, there were no protests by Muslim men. Just smiling faces and applause.

It's nice to see that Angelina Jolie can sit up front on the stage and speak to a mixed audience at an Islamic Center. Does this mean that Muslim women can do the same?

At the vast majority of mosques, Muslim women are not visible or audible, often separated from the main prayer area, and almost never given access to the microphone.  The Khutbah or sermon is almost universally performed by men. At a few mosques, women are occasionally invited to deliver a short "reflection," but this is not common.

Now that Angelina Jolie has paved the way, perhaps more women can speak and be engaged at higher levels at large mosques like ADAMS.

So congratulations, Angelina, on doing what many of us Muslim women haven't been able to do. Despite many years of community work and religious service, most of us cannot speak to mixed audiences at our local Islamic Centers.

Last time I tried to get a rather progressive local mosque to schedule events where women scholars could discuss their research, we couldn't get more than a single person on the Board to agree.

A few people expressed interest, but the proposal was voted down because the community was presumed not "ready" for women's voices. I bet they'd love to host Angelina, though.

A male ally at a mosque told me recently: "Whenever I express my frustrations (not just on this topic), my wife responds, 'That's what you get for thinking there is such a thing as progress at the masjid.'"

Angelina, it's great you got the brothers to take pictures of you and applaud as you did so.

Many of those pious brothers are too pious to countenance Muslim women in full modest attire speaking to mixed audiences. I guess we should invite Angelina Jolie to visit all our local Islamic Centers. All resistance will melt away.

My daughter is always asking why we always have to sit and listen to the men. I take her to Friday congregations, and I sit and simmer in fury as we sit on balconies and behind barriers, listening to a man talk.

Now I can tell her it's going to be okay. We'll just center a White movie star.

At ADAMS, women are actually more visible than they are in other mosques. ADAMS is better than most mosques.

This is in fact the most distressing thing to women - that this "better" is so sadly inadequate.  A small number of women "represent" 50% of the community for years on end, and women's voices are still never equal to those of men. The general pattern of mosque policy in North America is that of "benevolent patriarchy," as my friend Saadia Sultana describes it.

ADAMS is no exception. In some mosques, women happen to serve on the board in mid-tier or labor positions. There are rare cases of top-tier leadership. Men are still, mostly or always (depending on the space), the voices, the leadership, the religious leaders in these spaces.

My friend who participates in his local mosque board told me that he insisted on having women in Board committees. But who wants to participate in an unwelcoming space? Due to their exclusion from leadership and mosque activities, it was very challenging to find women to join these committees.

Eventually some women were identified. But this disturbed the brothers. My friend reported, "Yesterday, someone came to me in the masjid to report that people are complaining that sisters should not be on this (or any) committee, and in fact are wondering why sisters should be allowed in the masjid at all!"

This remains the case nationwide in most mosques. It is what will drive away our daughters (and many of our sons). Those who want to comfort themselves with the number of women who show up as followers, listeners, and attendees may do so.

Angelina Jolie still gets more respect in a mosque from men than most women who have spent years in the service of the community.

This post originally appeared on her blog, and was republished with permission on Muslim Girl.