During Sunday's Super Bowl, a new trailer for the Angelina Jolie, Morgan Freeman, James McAvoy assassin movie "Wanted" debuted. It's only 30 seconds, but it's action packed guns, kissing, and a shot of a topless Jolie from behind. It's at 23 seconds in and features a bevy of back tattoos.

But what are real? Look at pics of Angelina on the red carpet, both at this year's SAG Awards and last September's Toronto Film Festival (grey dress). Under her neck (Gothic script reading 'know your rights') the top of the lower back tiger tattoo and the Khmer script over her left shoulder blade are clear. 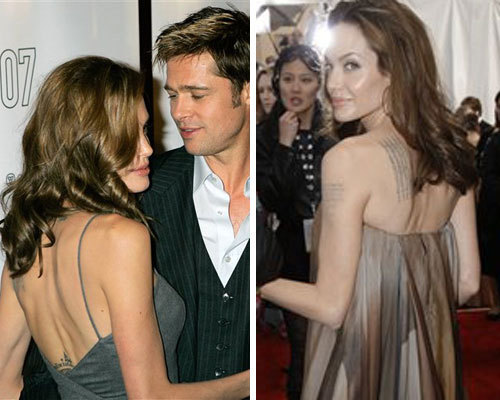 All but the central tattoo appear to be Jolie's ink. Here is a picture of her getting the large tiger on her lower back in June 2004.