Like many others caught up in the spectacle (some would say "carnival") that is the 2016 Presidential primary race, I find the, posturing, jockeying, and humor (intentional or otherwise) following our election process this cycle most intriguing. And yet, for all the free entertainment and constant influx of breaking news in the horse race to be Commander in Chief, I wonder if the country's fascination with personality over substance has led to an unprecedented level of uncouth vitriol. While the toxic nature of politics is inherent to the system, have we hit a new kind of civil low owing to an addict's level of constant flow of fresh headlines, social media feed nourishment, and the quest for higher ratings? Are we alienating countless individuals who appreciate nuance from civic engagement who we need for a healthy democracy? 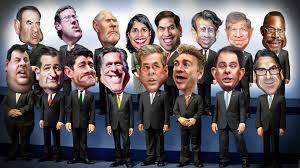 To be sure, it is vitally important who we, as a democratic society elect. Questions -- from the electorate and, indeed, the media -- about the track records, policy positions, and personal dispositions of those who seek the public office are of the utmost importance for an informed populace. During the past year, the American public has been bombarded with a seemingly endless list of infractions that are meant to display the inadequacies of those running for office: from Hillary Clinton's private email server, to Donald Trump's brusque remarks about Mexican immigrants, to Dr. Ben Carson's Proustian gaps in his personal history to Senator Bernie Sanders' unequivocal advocacy for his democratic socialist ideals. Each of these characteristics inherent to the candidates works for and against them, redoubts in a constant sea of oppositional attacks and hostile media bias. Because of this constant barrage, those with the fortitude to put themselves out there to lead should be commended. 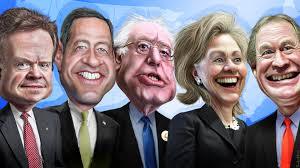 Concurrently, I feel there are some candidates running for president this time around (who I shall not name) that I just cannot take seriously. And there are others who are beyond the pale: they represent the worse, most base aspects of our nation. At some point, however, we must ask ourselves: Is our obsession with this contest and our dismissal, perhaps even hatred (or at least an extremely potent distaste), of particular candidates making our political process worse? The problem is not just the politicians and their rhetoric but the toxic political culture that so many of us bolster and foster.

Now, of course, someone running to be a top official must expect the increased scrutiny, but to what limit? Our democratic system is important for its procedure and its ability to maintain a functioning state supported by the people through peaceful transfers of power. But there is also the societal aspect that is vital to our republic, namely in the development of a collective character that furthers the aspirations of every citizen. We seek not only to develop our state but also our society. Though we are still a year away from the 2016 election, I feel as if the American political experiment this time around has drifted towards incivility at the expense of cultivating the brightest amongst our ranks.

In Ethics of the Fathers -- Pirkei Avot in Hebrew -- there is the following admonition: "Be careful with authorities, for they do not befriend a person except for their own sake. They appear as friends when they benefit from it, but they do not stand by a person in his time of need" (2:3). In the long arc of Jewish history, this verse was a blunt reminder to be wary of those who would seek the mantle of leadership for their own gain. Certainly, looking at this passage with respect to what is happening right now in American politics, one could construe this verse about politicians cynically (as many in the contemporary electorate already do). But this is counterproductive. We, as voters and citizens, have to break the cycle of cynicism and work for the type of political system we deserve; we have all the necessary tools, so let's put them to use.

For those seeking a more positive discourse in our politics, this is what I see as steps towards positive change. We can all re-commit to sticking to the facts, not pernicious rumors; only using language that we feel would be fair to both our preferred and opposing candidate; and imagining that a candidate we strongly dislike as one of our relatives who we disagree with passionately but whom we still have much respect.

In the thirteenth century, Rabbi Yonah of Gerondi, wrote:

If you see someone who has achieved a prominent position but whose behavior is inappropriate, do not say 'If I were in his place, I would not do as he does.' You do not know what tomorrow will bring, and you are no different from him or anyone else. Perhaps that prestigious position would sway you as it has swayed him. Only when you reach his place and his position and overcome your own tendencies will you have the right to question his conduct.

Politicians are not immune from emotional shaming. As the pressure builds, the constant rebuke from all sides may harden them in ways that make them less compassionate and more ideologically narrow. This is the opposite of what, in my view, we need in our leaders. As equally important are the people that elect those into office: we are not immune to the impact upon ourselves and our culture when we engage in diatribes and screeds in lieu of reasoned debate. Each of us in the political ecosystem is profoundly and importantly imperfect. As James Madison wrote all those years ago, "If men were angels, no government would be necessary" (Federalist No. 51). We are flawed; the system is flawed. But that doesn't mean we should expect perfection of intellect and temperament from our politicians. We are a rapidly changing society, for better or worse, and we hold the power to shape the future of this nation. The quest to make this a "more perfect union" is never-ending. For the sake of our children and grandchildren, let's cease our petulant attitude towards those running for the highest office in the land and begin pursuing a rational course of action that will have consequence for decades to come.

Rabbi Dr. Shmuly Yanklowitz is the President & Dean of the Valley Beit Midrash, the Founder & President of Uri L'Tzedek, the Founder and CEO of The Shamayim V'Aretz Institute and the author of nine books on Jewish ethics.