I am not an angry person; if anything, I'm too mild-mannered -- but when I learned I had breast cancer, I was angry at times, plenty angry.

Anger is a bit misunderstood, at least in the realm of cancer.

A person with cancer experiences a wide range of emotions -- sometimes on a daily basis, sometimes on an hourly basis and sometimes even on a minute-by-minute basis. A few of the emotions that often rise to the surface, uncontrollably at times and without warning, are fear, uncertainty, vulnerability, anxiousness, disgust, despair, hopelessness, loneliness and anger. Perhaps the two most powerful of these feelings are fear and anger. I don't feel fear as often these days, so maybe this indicates anger is the stronger of the two since I still get plenty angry on occasion.

When I received the phone call from the doctor who delivered the news of my diagnosis matter-of-factly, as if letting me know I had an ear infection or strep throat, I was shocked and then angry.

I was angry for these and lots of other reasons, too.

In addition, they often feel guilty for feeling angry.

Anger, just like any feeling, is not good or bad in itself. It's just an emotion that sometimes you need to feel. In fact, it can be quite a useful feeling. It can be a great motivator. Just like I always told my students, it's okay to feel angry. It's what you decide to do with your anger that matters.

Feeling angry can be beneficial to a person with cancer. It provides a means to vent and let off steam. After all, if anyone deserves to feel angry, it's someone with cancer. I believe it's even essential to feel anger in order to "process cancer," just not all the time.

Anger is like a pot of boiling water on the stove. The water starts off at a slow simmer with gentle bubbles gurgling, creating just a little heat and steam at first. As the temperature builds, it becomes hotter, more intense, even dangerous as it reaches its boiling point of scalding water and vaporizing steam, both capable of causing bodily harm. If you allow the boiling to continue, eventually the water disappears and you end up with nothing but an empty, burnt and ill-smelling pot. 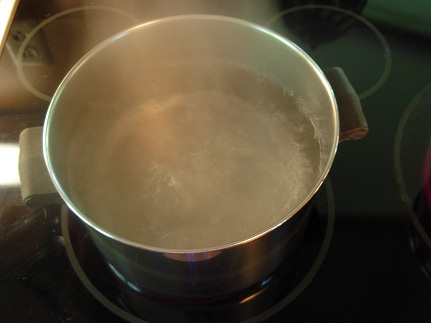 Anger, too, can simmer, intensify and finally boil over if you try to keep it in or covered up. Just like the "boiled out" pot on the stove, concealed or covered-up anger can eventually leave you feeling empty, burned out and able to accomplish little.

The trick is to allow yourself to feel all your emotions, even anger. Learn to use your anger to fight back in your own way, not the way somebody tells you to. Properly-channeled anger can be a motivator or call to action. If you let yourself feel the anger, harness it and use it to accomplish something, you have then successfully utilized its energy for something constructive.

So if you or someone you care about has been diagnosed with cancer, allow yourself (or them) to feel all emotions, including anger. Then try to figure out (or help them to figure out) a way to use it in a constructive way. It might take a while to figure something out, but you will.

I am not an angry person, but I do get angry sometimes. When I do, I do what I always do. I write about it.

What do you do?