I experienced the power of this statement at one of Ginny Robertson's recent On Purpose Woman conferences in Maryland, when dozens of presenters set the stage for real transformation.

It began with Maq Ele of G-String Living, a woman who stood 6'4″ in her sparkling silver shoes with a magic story to go with them. Maq was able to inspire us through her bold spirit and the acknowledgement that "it's just me and God in the room here." When you have just been told you are God, it becomes much easier to see the negative stuff inside that needs love and healing.

Maq had put an envelope under our chairs with "negative" phrases we embody like Limited Thinking, Acting Small and Victim Consciousness. My envelope had this last phrase and I wanted to say, "Oh, I'm so done with victim consciousness." Yet I stood up to "take one for the team," as many later described my action.

What I had shared from my wide open electrified heart was the desire for more open-hearted family communication. I admitted to not being my best self in the midst of all the fast-paced half-listening at home and wanted to sustain what we all felt right then, in that safe space, in my own home.

It is easy to get inspired at most well organized conferences. But this one held a unique surprise for me. I got angry in a session called Embracing the "Other," led by Vaile Leonard and Ginny Robertson, and I think that was the plan. There are so many things that pit one person against another! The question of "When did it become okay to call each other a bitch?" led to a rich discussion about divisive television programming and ridiculously intense (yet often very subtle) competition for the best fashion, the best guy, the best job, the best everything.

What does all this competition do to women? It makes us suspicious, distrustful, envious, negative and down on ourselves.

I was feeling this strong collective anger and noticed that we only had 5 minutes left of the session and raised my hand to ask if there would be time for me to lead us in a song. I learned that we had two closing exercises that should transform the anger and that I could also sing the song at the end. In the meantime, women began to share experiences of isolation, how it felt to not be supported and not be able to ask for support. Something was shifting....

In the first closing exercise we read a Forgiveness Pledge: 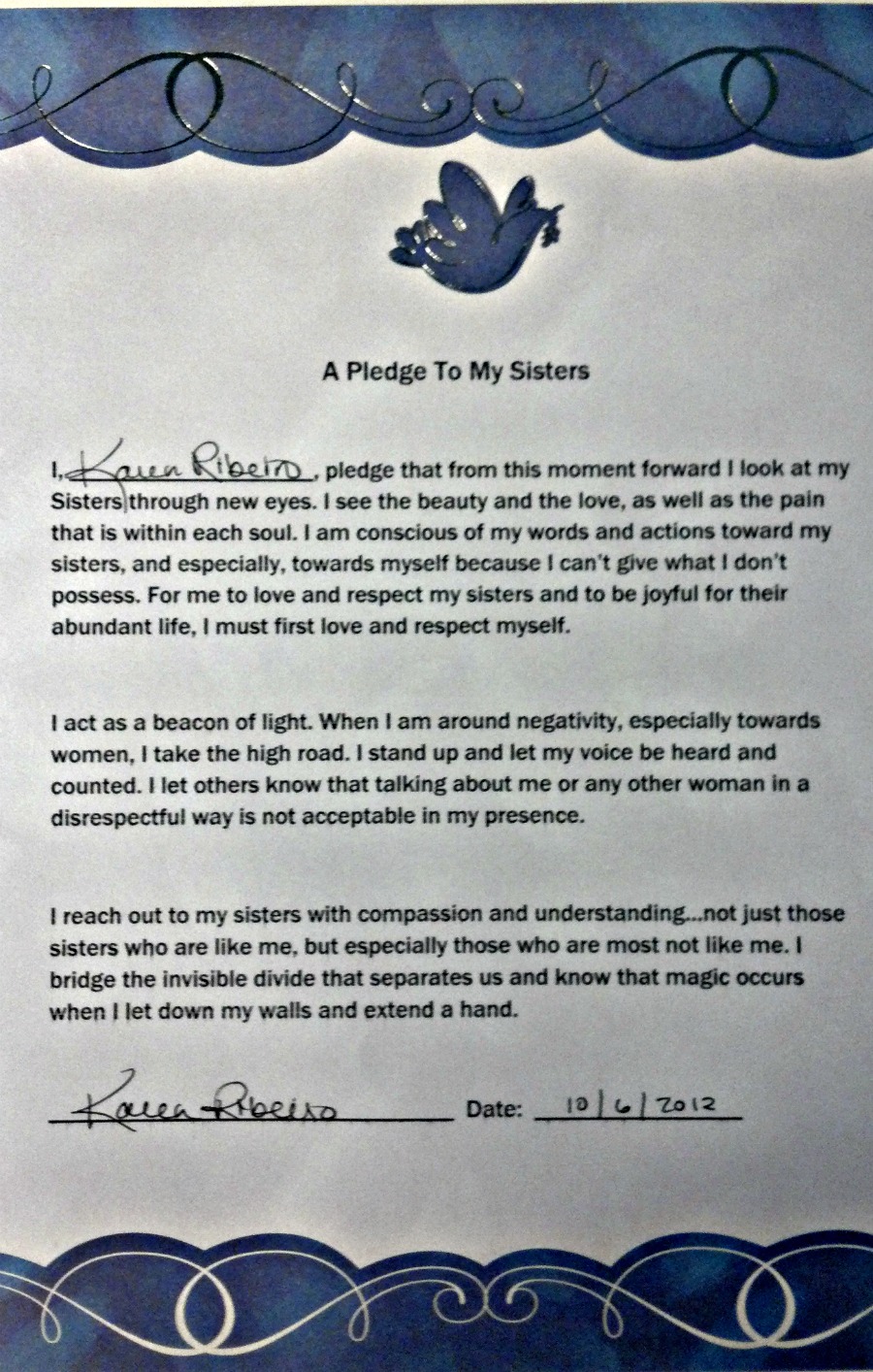 It was so powerful I could feel the connection between us electrify as we echoed phrase after phrase. It helped tremendously. And then we did the second closing exercise, which brought half of us to tears-tears of anger transformed into hope.

Our facilitators had instructed one woman in the front row on the far right of the room to look in the eyes of the woman to her left and simply say "I see you" (a traditional greeting in certain African cultures) and have each woman repeat this to her neighbor row after row around the room and then back in the opposite direction. After a few women followed instruction, it became automatic, intuitive and perfectly natural for both women looking into each other's eyes to say "I see you" to each other, making the second half of this exercise unnecessary.

I was uplifted and content, yet I'd asked to lead the group in song... so I did! Many joined me in a song called "Dear Friends." One woman was so impressed she later told me she would share the video she had recorded with her family and teach them to sing it together.

The lyrics are simple:

Dear friends, dear friends
Let me tell you how I feel
You have given me such treasures
I love you so

It is possible and downright urgent to actively transform the isolation and divisive competition of this world that has plagued us since industrialization. In the safe space of a conference, it is easy; back in our day to day routines, not so much.

After the conference ended a large group of women went out to dinner. We were hungry and struggling with odd restaurant rules, so we began complaining amongst ourselves. This behavior seemed just a bit out of place given our day of joy and renewed perspective. But what to do when your circumstances (many hungry women) do not improve (unable to even order salads until the rest of our party arrived) despite logical action? This situation was no big deal in the scheme of things. After an hour a few baskets of bread were delivered and we moved blissfully into happier conversations.

But what about the big deal circumstances that piqued our anger earlier that day?

As I drove home the next day, noticing anger directed at a driver who cut me off and ugly language yelled at another driver going 20 mph below the speed limit in the fast lane, I remembered the "I see you" exercise and thought, "I can see myself getting engrossed in an audiobook or thought and driving quite a bit slower than the flow of traffic", and "I can certainly be in a difficult situation needing to drive just a bit less polite than I might like."

Even though road rage wouldn't naturally be considered a Big Deal Anger circumstance, it is these day-to-day minor triggers that generally go undetected. Road rage or other seemingly minor irritations that we consciously or unconsciously try to ignore sure do add up! Instead of walking around like a ticking time bomb, I want to live in the same blissful connectedness of being seen that I felt in that simple "I see you" exercise. Living this way begins by recognizing that we ALL want to live this way. And it begins by stopping the blame.

How powerful would we be if we all stopped the blame?

I can remind myself not to blame drivers on the road for behaving a little differently than I might at that moment. I'm not sure yet that I have the capacity to not blame media producers for making corrosive "reality" TV shows, but I can be a better listener at home and I can keep looking for ways to SEE (and listen to) others instead of blaming. And guess what? This Stop Look and Listen behavior neutralizes anger.

In addition to signing the Pledge to My Sisters, I pledge to listen better to my family members and stop blaming them for communication struggles. Neutralizing and transforming my own anger towards others dramatically increases my capacity to love them. That's powerful!

How are you transforming your anger?