Michael J. Feeney, former president of the New York Association of Black Journalists and winner of the group's national Emerging Journalist of the Year Award in 2010, died January 31st at the age of 32, bringing heartache to the journalism community.

"He was a tenacious journalist who possessed a passion and energy for telling stories reflective of diverse communities - stories which otherwise might not have been told," NABJ President Sarah Glover said on the group's website.

Feeney was characterized by friends as an enormously talented young journalist who always took time to help his colleagues. A former writer at The (New York) Daily News, The Record and The Associated Press, he was on the verge of beginning an entertainment beat for CNN when he became ill, his mother said.

Reba Willis, Feeney's mother, told The Daily News that her son died of complications from a staph infection of the kidneys. She said he'd been in Holy Name Medical Center in Teaneck, NJ, for five days.

NABJ founder DeWayne Wickham, who taught Feeney journalism at Delaware State University, said Feeney was "an immensely talented young Black man for whom - like far too many of our young Black men - death came way too early."

In addition to his mother, he is survived by a sister, Maria Feeney, and a twin brother, Anthony Feeney.

"He looked out for me big-time when I got to the Daily News," said former News reporter Jan Ransom. "Every source I met raved about him -- and naturally, by association, that meant I was in their good graces, too."

Feeney graduated from Delaware State University in 2005. He worked for The Associated Press in Detroit and Baltimore, and later at The Record before joining the Daily News in 2009.

The newspaper said that days ago, Feeney was online posting about one of his favorite passions -- professional wrestling. He also posted a message about a Super Bowl game he will never get to see.

"It's going to be a hard pill to swallow for everyone," Willis said. "He had so much more to accomplish. He is truly going to be missed." 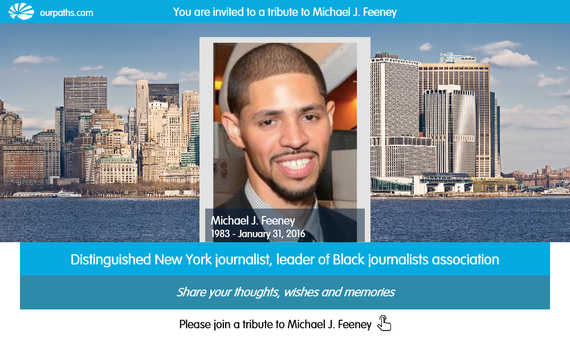