Can you imagine what's it like to hand-collect bacterial specimens from 100 of your closest female friends and colleagues? According to Anicka Yi, the intrepid artist behind a new installation at New York's Kitchen space, it requires a lot of legwork, q-tips and ziplock bags, plus a desire to turn field reporter/mad scientist on your peers.

For her project "You Can Call Me F," she successfully gathered samples from 100 women, as part of a larger effort to draw a parallel between the fear of contagion and the unease with which some view feminism and its ability to redirect power. That might seem like a big leap, from bacteria to banging down the doors of patriarchy. That's because unpacking Yi's project is hard work, so it's best to start with the basics. 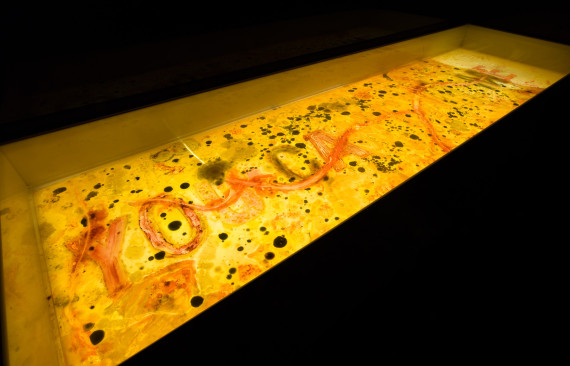 Korean-born, American-based Yi is currently in residence at the Massachusetts Institute of Technology, where she's been working with synthetic biologists in the hopes of creating a superbacterium. That's where the 100 samples come in. Yi and her MIT collaborator, Tal Danino, are engineering the superbacterium from the biological information she gathered. That superbacterium is what's producing a "pretty pungent" odor at the Kitchen.

The smell -- Yi also described it, in a phone call with The Huffington Post, as "a little funky" -- is but one sensual layer in an installation chock-full of visual cues that recall viruses, hygiene and the gritty nuances of encroaching ecosystems. At the Kitchen, her specimens sit inside plastic quarantine tents stuffed next to incubating hydro gel beads, motorcycle helmets and dried shrimp. The ephemera helps build a laboratory of paranoia, an environment meant to mimic the passing fright one may just as easily attach to an Ebola outbreak as the growing organization of women's networks. 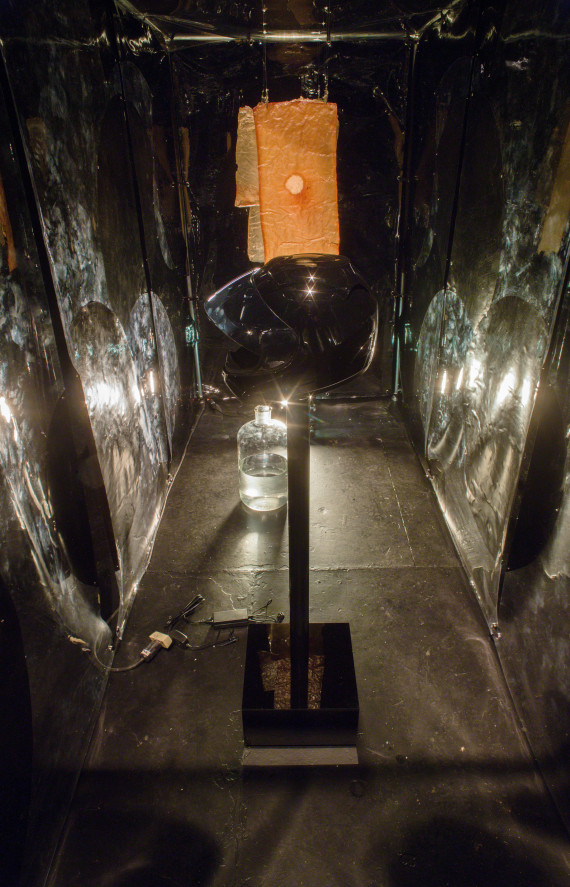 "All the women [who gave samples] are in my professional network," Yi explained. "They are artists and curators and theorists and critics and collectors. These are the people I come into contact with on a day-to-day basis. Since the premise [of the project] is that a virus could start with any one person, I had to have come into contact with these women over the course of three to six months. I would have had body contact, have been in the same room or at the same party. I really wanted to create the essence that we are physically together, exchanging energy and senses. Feminism -- it's all in the air."

Aside from the specimens, another fleeting smell lingers in "You Can Call Me F." It's subtle, but not for lack of trying. You see the odor was gleaned from the inside of one of Larry Gagosian's galleries in New York City, a network of art havens Yi refers to as "representative of the apex of patriarchy." The smell is actually more a lack of smell, what Yi bottles up as a combination of cleaning products and anxiety. While you might not notice it, its inclusion in the show plays a major roll. Smell, according to Yi, is part of a greater value system.

"In our society, in the West, we associate power with no smell. We don’t want to think of the President of the United States or the IMF as having a smell. Finance and government are associated with a lack of smell," Yi asserts. "When something is very pungent and funky in our society, [it is often associated with] someone who is uneducated or impoverished or an immigrant. I really wanted to foreground these prejudices. What are these smells? How do we attribute value to these kinds of smells? It comes down to hygiene and discomfort, along the lines of gender and ethnicity." 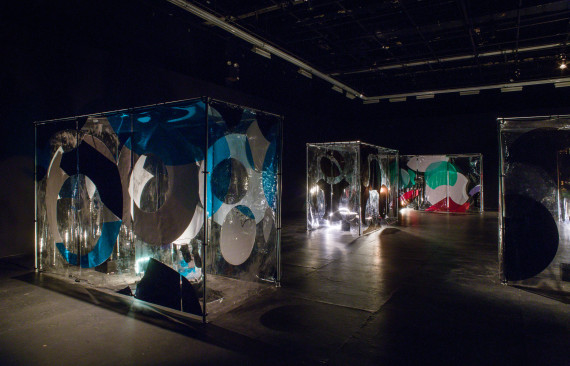 Anicka Yi, You Can Call Me F installation view, 2015

In another life, Yi had entertained a career in perfumery, but the art world is where she took root. Like any other field, it has its problems. "There is a feeling one encounters as a female artist, a feeling I felt about a year ago. I started noticing very obvious things that other male counterparts do -- they really organize, run in packs, and are there to boost each other. There’s a sort of an instinct that males have, a survival instinct. 'I can advance if we advance each other.' Which creates a solid power structure. I noticed that women don’t do that. We tend to abandon the group, for a lot of different reasons."

Yi's work isn't meant to solve the problem outlined above. She notes self-organization and support systems are popping up all around her, in which women are choosing not to assimilate but to form packs within the "giant power petri dish" of art galleries. A more general fear of feminism persists in Western society though. And if anything, Yi believes her project just brings up more questions, rather than resolutions, about the future of women and, well, smells.

"There are so many misconceptions about smell," she concludes. "It’s all purely subjective, and we have no real vocabulary around it. In other cultures, they have hundreds of words to describe smells. We don’t have a consensus. It’s a very undeveloped area." 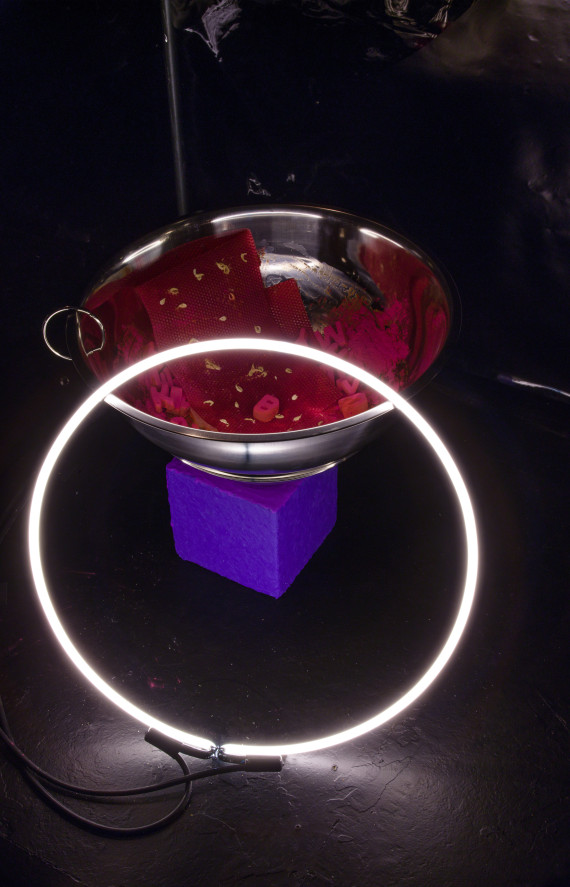 Going forward, Yi has ambitions of starting a smell symposium, to bring together the minds -- "noses," she joked -- of the art and science fields, feasibly highlighting the different ways in which the various experts work. While the scientists she's surrounded by at MIT strive to prove hypotheses in study, Yi relishes the interdisciplinary flexibility of art making, and her world's willingness to fail. "It’s a medium for me, failure. I’m prepared for failure. I set out with that in mind."

And because Yi's installation aims to connect a dense configuration of dots in as many ways as it can, the title of the show hides another association. The "F" in "You Can Call Me F" -- a sly nod to the heightened thriller excitement of classic novels like V for Vendetta -- can stand for anything. "Female. Fungus. Failure. You name it." 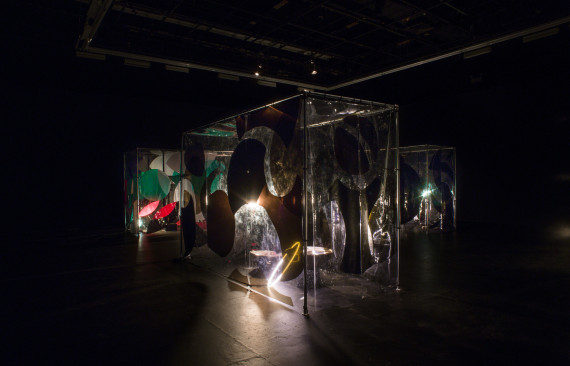 Anicka Yi, You Can Call Me F installation view, 2015