During Australia's deadly fires in February, firefighters came upon a burned and dazed female koala -- now nicknamed Sam. Sam was spotted by Victorian volunteer firefighter David Tree limping around on scorched paws. Tree approached slowly, crouched down and offered the furry marsupial a drink from his water bottle. She accepted, placing her paw in his hand as she gulped down three bottles. 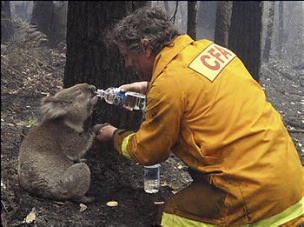 As of May, 2009, there are more than 76 million Google results and 5000 YouTube videos about this moment.

The attention paid Sam, the tender care shown by Tree, and the public swell of empathy is one small but significant proof that the relationship between human and animal is being looked at anew.

The coincidence of two key factors has brought us to this crossroads in our stewardship. The first factor, the internet, gives us instant and universal witnessing. The abject horrors of abused chickens and tortured cows are available 24/7 on YouTube for all to see.

The second factor is a slow collective dawning that...we are the solution.

A new species is arising on the planet. It is arising now, and you are it! --Eckhart Tolle

I am absolutely certain that animals have souls. It's as if, because of their sensitivity they take in our heartlessness and are feeling the impact of our massive dereliction of the soul. Animals through their great power of love come into a profound psychological and spiritual union with those whom they love. And that isn't just a dependent relationship, it's a visionary relationship.

History is filled with examples of powerful humans' empathy with animals.

There is a legend that Buddha called all the animals to come before him, but only 12 arrived. The rat was the first to arrive followed by the ox, tiger, rabbit, dragon, snake, horse, goat, monkey, rooster (cock), dog and finally the pig. In return, one year was named after each of them.

As his army marched towards Mecca to conquer it, they passed a female dog with puppies. The Prophet Mohammed not only gave orders that they should not be disturbed, but posted a man to see that this was done. He stated, "Verily, there is heavenly reward for every act of kindness done to a living animal."

When the great 13th century Sufi Mystic Jalaluddin Rumi died, his beloved cat did not eat or drink anything after his passing and survived for only seven days. As Aflaki writes, shortly before Rumi's death, his cat came to him and meowed sadly. Rumi smiled and asked those around him: "Do you know what this cat said?" They said: "No." Rumi said: "Soon you will go to the heavens, to your homeland with safety. What will I do without you?"

Francis of Assisi the patron saint of animals and ecology was traveling with some friars and looked up and saw the trees full of birds. Francis "left his companions in the road and ran eagerly toward the birds" and "humbly begged them to listen to the word of God." The birds stretched their necks and extended their wings as Francis walked among them touching and blessing them. This event was a turning point for Francis.

Three pivotal events have quickened the collective conscience about human/animal stewardship...and set in motion the factors for change.

1. 2005, Hurricane Katrina, New Orleans residents forced to leave thousands of pets to die when they were evacuated.

2. The recent recall of 60 million containers of pet food after an unknown number of cats and dogs were poisoned, raising questions about pet-food safety.

When Tribal Shaman, Oren Lyons addressed the United Nations in 1977, his wisdom became record of the sacred pact between man and animal: 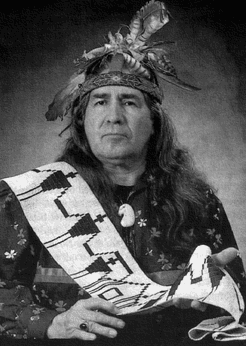 I do not see a delegation for the four-footed. I see no seat for the eagles. We forget and we consider ourselves superior, but we are after all a mere part of the Creation. And we must continue to understand where we are. And we stand between the mountain and the ant, somewhere and there only, as part of the Creation. It is our responsibility, since we have been given the minds to take care of these things. The elements and the animals, and the birds, they live in a state of grace. They are absolute, they can do no wrong. It is only we, the two-leggeds, that can do this.

Here's hoping we two-leggeds can finally learn some animal grace.