The world's leggiest creature on record is even more bizarre than its 750 wiggling limbs attest, according to new research.

The white millipede named lllacme plenipes (Latin for "the pinnacle plentiful feet") and found only in a small area of Northern California wowed researchers with its unusually complex build in such a tiny package — it measures 0.4-1.2 inches (1-3 centimeters) long.

"It basically looks like a thread," lead study author Paul Marek, a postdoctoral entomologist at the University of Arizona, told LiveScience. "It has an uninteresting outward appearance, but when we looked at it with SEM and compound microscopes, we found a huge, amazingly complex anatomy." (SEM stands for "scanning electron microscopy.")

A rudimentary fused mouth with no known function is among the oddities, as are hairs on its back that produce a silklike product. "There was this huge amount of neat detail that we're just scraping the surface of," Marek said. [See Photos of the Bizarre Millipede] 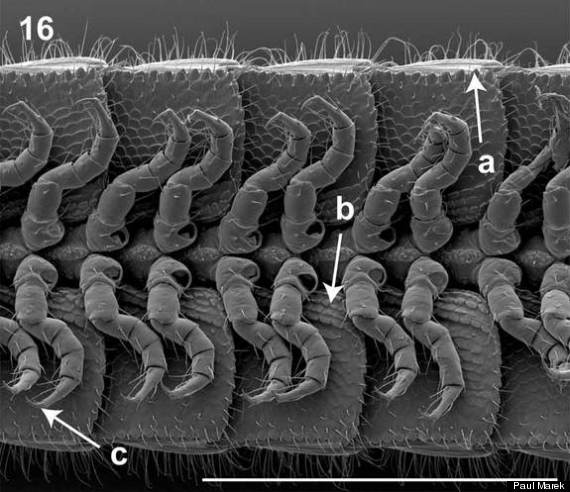 Scientists crowned the species as the leggiest in the animal kingdom (some of its wiggling limbs shown here), beating out a related species in Puerto Rico with 742 legs.

The research follows up on the 2006 rediscovery of the millipede, an elusive creature previously described in 1928.

After a patient search, Marek and colleagues from Hampden-Sydney College and Auburn University found the creatures clinging to sandstone boulders close to moist ground or roaming 4 to 6 inches (10 to 15 centimeters) deep in soil.

The millipedes are limited to a patch of grassy oak woodlands spanning about 1.7 square miles (4.5 square kilometers), or 823 football fields, near Oakland and Berkeley.

Over a three-year span, researchers found a total of 17 specimens in various life-cycle stages. Successful hunts required two researchers to examine an area for an hour before finding a single specimen. They stopped collecting specimens in 2007 to avoid depleting the species, which their surveys suggested is rare in the wild.

The researchers also sequenced a gene called cytochrome c oxidase I to give the creature a unique DNA fingerprint or barcode to help researchers identify lllacme plenipes in the future.

"The study moved on from identifying the animal from its bodily traits and added molecular data, behavior and reconstruction of the ecological regions where this animal may exist, to diagnose this unusual species," Michael Brewer, a postdoctoral fellow at the University of Berkeley, told LiveScience.

"By looking at all these different lines of evidence, we get a much greater appreciation for what the diversity is, but also factors that may influence how this animal persists or doesn't persist in the future," said Brewer, who was not involved in the current study.

The strangeness doesn't stop with anatomy. The closest relative lives in South Africa, researchers found. The millipedes possibly lived across the supercontinent Pangaea, which held nearly all of Earth's landmasses and began to break up some 200 million years ago, before dying out as California and South Africa split apart. The speculation would explain why the similar species could exist so far apart – that extinctions across the landmass would leave pockets of surviving related species.

Researchers said the millipede is under threat as human development encroaches on the region and climate change vaporizes the fog that keeps the habitat moist.

Millipedes like this one (lllacme plenipes) are second to earthworms in their ability to break down dead plant matter, giving bacteria and fungi a chance to consume those organic materials.

"We don't know much about the biology of these organisms, so for them to go extinct before we understand what role they may play in the ecosystem, or even what they could provide to humanity given enough study, would be a huge shame," Brewer said.

Millipedes are second to earthworms in their ability to break down dead plant matter, giving bacteria and fungi a chance to consume those organic materials.

Scientists have crowned the species as the leggiest in the animal kingdom, beating out a related species in Puerto Rico with 742 legs. Because much of the tropics remain understudied, Illacme plenipes may hold its title only among millipedes. "The leggiest animal could be in the tropics; we just skimmed the surface of biodiversity there," Marek said.

"The next step would be to hopefully spur some interest in preserving not only this species, but the habitat in which the species lives."

However, the creature will remain elusive for researchers. "We haven’t been able to culture these in the laboratory," Marek said. "It seems they need some sort of food that they're not getting in the laboratory."

The leggy creature is described online today (Nov. 14) in the journal ZooKeys.