For most people living in western countries, the idea of being eaten by an animal is at once odd and scary, but generally considered the stuff of fantasy and horror films rather than reality. However, for some extinct human species, and even modern humans of the not-so-distant past, the prospect of being hunted, killed and eaten by wild predators was reality.

And it wasn't just bears, big cats, crocodiles or sharks doing the hunting and killing. At least three different predatory bird species are suspected to have fed upon humans.

African Crowned Eagle
The African crowned eagle is a large raptor that specializes in feeding on monkeys, some of which are larger and heavier than the eagles themselves. The eagle's bold, predatory nature and powerful talons are effective tools for dispatching such large prey, but flying away with a monkey that is more than twice its weight is a challenge. The African crowned eagle solves this problem by dismembering its prey on the ground and carrying it in pieces to its nest or up into the trees for consumption. 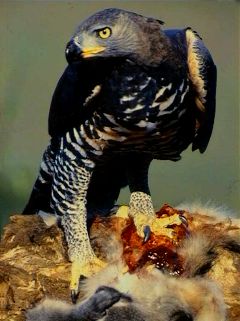 There are chilling rumors that the skulls of human children have been found in the nests of African crowned eagles. Whether or not that's true remains unconfirmed, however, there is solid evidence that eagles the size of the modern crowned eagle once dined on now-extinct species on the human family tree.

In 1924 the skull of a species known Australopithecus africanus was discovered in a cave in Africa. It belonged to a three year old individual, known as the "Taung baby" after the cave in which is was found. The skull showed distinctive markings around the eye sockets that were very similar to markings left by an African crowned eagle on its monkey prey in the process of stripping off the flesh. Despite these markings, at the time of its discovery it was theorized that the Taung baby was killed by a large cat because scientists thought it was too large and heavy to be killed and eaten by a bird. In life the Taung baby would have weighed around 25 lbs -- roughly same the weight as the monkeys fed upon today by modern African crowned eagles. The more recent discovery of the eagle's ability to kill and dismember prey of this size coupled with the markings on the Taung baby skull is strong evidence that he or she was indeed killed and eaten by an eagle. 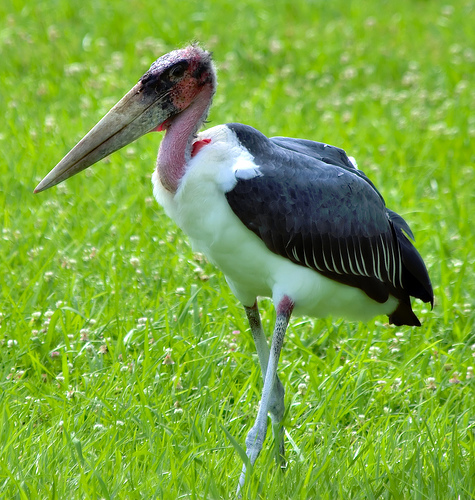 Marabou storks are predator-scavengers that will feed on just about anything living or dead that they can subdue and/or swallow with their large beaks. Recently, remains of a now-extinct giant species of stork were discovered on the island of Flores in Indonesia, where a tiny human species (nicknamed "hobbits" after the characters in J.R.R. Tolkien's Lord of the Rings fantasy stories) also existed.

Based on the behavior of living marabou storks and the diminutive size of the hobbits, some scientists have theorized that the giant storks would have included the little humans on their menu. Read more about these storks and their human prey over on my Animal Oddities blog on Animal Planet's website. 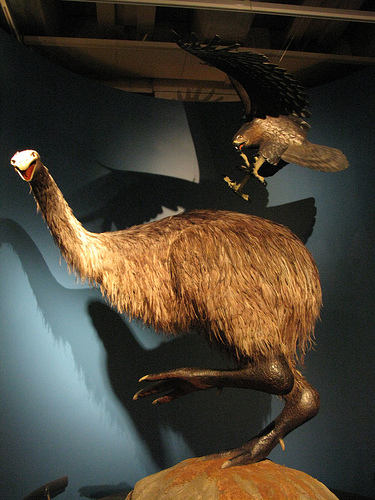 Legends of the Maori people of New Zealand describe a man-eating monster bird called Te Hokioi. That legend is thought to have been inspired by Haast's eagle, a giant raptor that survived until only about 500 years ago. Haast's eagles were huge, weighing 40 lbs with a nine-foot wingspan and three-inch long talons. They used their formidable size and strength to subdue and kill prey much larger than themselves, including the moa, a massive flightless bird that weighed as much as 300 lbs. The photo at right shows a model of a Haast's eagle preying on a moa.

While there isn't evidence as strong as the Taung baby skull that supports the idea that Haast's eagles preyed on people, the legends of the Maori suggest that they did indeed hunt and kill modern humans, at least occasionally.

Video: This short video shows the killing apparatus of an African crowned eagle. I definitely would not want to be on the receiving end of those talons. Poor Taung baby!