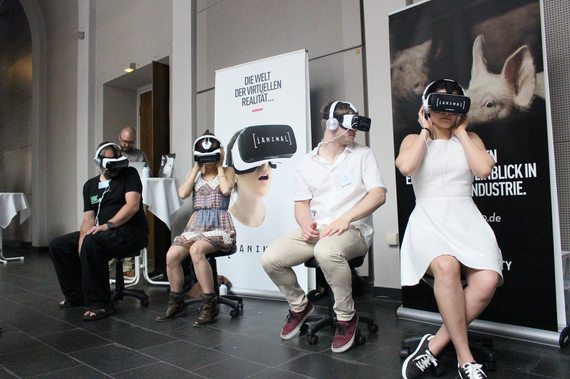 Attendees experience the life of a pig using virtual reality at the Sentience Conference in Berlin. EFFECTIVE ALTRUISM AUSTRIA

This weekend I sat in on a lecture by Natalie Cargill, a lawyer in the United Kingdom and former human rights advocate for women in the Middle East. Cargill informed us that several UK laws forbid the "unnecessary suffering" of animals. Together with the "defence of necessity," a legal principle in the UK that defines "necessary" as being highly urgent and dealing with an immediate threat to someone's life, you would think that animals in the UK live pretty decent lives.

Unfortunately, the application of basic legal principles to farmed animals has been quite absurd. In the UK and elsewhere, chickens raised for meat grow far beyond their natural rate in order to increase slaughter weight and reduce production costs. Sometimes the chickens can't even stand on their own two legs because of the excessive growth.

The breeding chickens, who are kept separately from those raised for meat, still suffer from this growth issue, but the farmer is incentivized to keep them alive longer so they can continue breeding more chickens.

A common UK farming practice is to limit the feed for these breeding chickens, essentially starving them to keep them alive and avoid the health issues that come from their growth rates. A 2003 case led by the animal protection group Compassion in World Farming, who were also represented at the conference, confronted this terrible practice in court. Even though UK law explicitly states that farmed animals must be fed a "wholesome diet" that leads to a "positive state of wellbeing," the court ruled that the chickens were not technically starving, and there were no specific laws forbidding ultra-fast growth or intensive farming, so the practice was determined to be lawful.

Cargill and others are taking on the surprisingly difficult but potentially revolutionary project of challenging these absurdities and demanding a fair application of the UK law. Can the abuse and slaughter of farmed animals really be explained as highly urgent or preventing an immediate threat to human life, especially given the growing availability of tasty, healthy animal-free foods?

It wouldn't be if we implemented public opinion. In the US, 32% take the seemingly radical view that animals deserve the same rights as people, and another 62% believe they deserve at least some protection. Either of these views would surely justify the adoption of an animal-friendly food system.

In an increasingly globalized society, animal advocates like Cargill are essential for dealing with a widening gap between the way we view animals and the unfortunate nature of their cruel treatment. There are a wide variety of moral principles held by society that could motivate changes -- transparency in business ethics, human responsibility to the other inhabitants of this planet -- but these ideas are stranded in society without a framework to unify them and orchestrate their application in our progressively complex world. 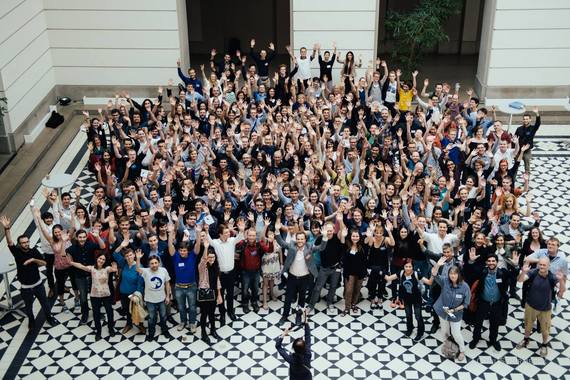 The European organization Sentience Politics, which hosted the Sentience Conference this past weekend in Berlin, hopes to establish such a framework. Executive Director Stefan Torges stated in his welcoming address that, "The question that drives us is how we can use our limited resources of time and money to effectively reduce the suffering of sentient beings as much as possible." Sounds promising, but quite a mouthful! Let's break this down:

First, it's a sad fact of charity that we have limited time and money to give. We can't afford to fund every worthy cause, so those in need deserve our careful consideration and prioritization. Society is beginning to realize that we should follow research, expert guidance, and evidence of impact to choose the most effective opportunities. GiveWell, a charity evaluator taking this thoughtful approach, now moves roughly $98 million per year to some of the most effective charities.

Second, given the large amount of truly horrific suffering in the world, such as that in animal farming, and the agreement across ethical beliefs that reducing suffering is a moral priority, that seems like a promising start for a comprehensive altruistic strategy.

Finally, a "sentient being" is simply a creature -- human or otherwise -- with the capacity to experience suffering. Of course, we currently have limited evidence of how suffering works in the brain, even in humans, but we have powerful behavioral and biological evidence that a large number of species, including chickens and other farmed animals, share this mental capacity and therefore deserve our moral consideration. Given the vast number of farmed and wild animals, those individuals deserve substantial consideration.

It was incredible to see so many organizations at the conference taking this broad, compassionate view. Lewis Bollard of the Open Philanthropy Project, a project of GiveWell and the philanthropic foundation Good Ventures, has spearheaded donations of $2.5 million to helping farmed animals in the past few months, and hopes to give up to $10 million per year in the near future. They approach this in two ways -- reducing the number of suffering farmed animals, such as through inspiring people to go vegetarian or vegan, and reducing the suffering of existing farmed animals, such as through campaigning for businesses to adopt better welfare policies. Movement leaders at the conference felt this funding would lead to huge changes for farmed animals.

Lucius Caviola of the Effective Altruism Foundation is taking a "meta" approach. In addition to working on campaigns that directly help animals, he is conducting research that will help us better understand human-animal interactions, especially the key factor that prevents us from giving proper moral consideration to animals -- speciesism.

This bias against certain species leads to inconsistent views like opposing the cruel treatment of dogs, but supporting the abuse of pigs that comes with eating them. After thinking hard about this, most of us would agree that the abuse of pigs is also wrong, but we are initially overcome by the stereotype that pigs as "food animals" and dogs as "pets," an artificial distinction with no real moral relevance. If we better understand this bias, we can become more effective as animal advocates.

Although strategies varied widely between attendees, there was a deep camaraderie in being with fellow animal advocates who thought critically about their work, innovated to find new cost-effective programs, and remained eager to change their approach if they found a new, more promising opportunity. A remarkably small number of animal protection advocates and organizations, and charities in general, take this modest and strategic perspective, but Sentience Politics successfully banded together many of them, reflecting a quickly growing and powerful force in the animal protection movement.