One More Chance, a self-proclaimed animal "rescue," was operated out of a former hog farm in Ohio. Most of their dogs were kept in crates and plastic airline kennels stacked on top of each other in dark hog stalls. They almost never got let out of their crates. Some lived in makeshift wooden pens outside. These dogs fought for what little food there was, and the injured lived with their untreated wounds or died alone in the corner of their pens.

Encore, a male mixed husky, lived in this canine Gulag for years. He was one of 329 survivors rescued by the ASPCA and the Clark County, Ohio Humane Society in March of this year. Another 76 dogs did not live to see the arrival of the rescue crew.

The Washington Animal Rescue League, my rehabilitation and adoption facility, agreed to take 30 of these dogs. Specifically, we asked for the ones whose mental and medical conditions were most dire. Our facility has both a full-service veterinary hospital and a team of professionally certified behavioral rehabilitation experts; we feel that gives us the responsibility to look after animals who need more than what most other shelters can provide.

The arrival of the Ohio dogs at the League was not a storybook rescue moment. None of the sick and terrified animals showed any recognition that they had just been rescued. Most wouldn't leave their travelling crates willingly, even with gentle coaxing and treats as incentives. Some either couldn't or wouldn't walk into their new, temporary home. They had to be carried.

Our veterinarians estimated that Encore was six years old. We don't know how many of those years he spent at One Last Chance, but he was there long enough to develop the skin, ear, and eye infections that inflicted all the arriving dogs. Unlike the rest of them, Encore wasn't overly thin. Being one of the tougher dogs, he may have eaten better than the rest. 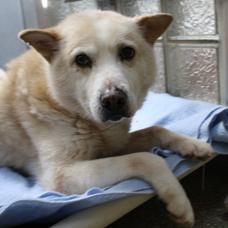 But Encore's spirit was in worse shape than his body. Our behavior director recalls that "Encore was very unsure of people, having had little to no human interaction for several years. He wouldn't look at anyone but would stare at the ground when approached. He never wanted to leave his den, he'd just lie there facing the wall. He wouldn't eat food out of a dish at all and wouldn't touch food if anyone was watching him. And it was months before we saw his tail wag, even a little."

Clearing up the dog's various infections took time. Teaching him to trust people and enjoy their company took even longer. But finding him an appropriate home -- the last stage in our "rescue, rehab, rehome" mission -- seemed to take forever. All the other 29 Ohio dogs left long before he did. Encore was still here when we did our big 33-hour, non-stop Adopt-A-Thon this past August. And he was one of only four dogs still at the shelter when the record event was over.

His big break finally came in September. A woman came in asking for the dog who had been in the shelter the longest. She was looking for a real rescue case. (We get these big-hearted adopters from time to time; typically they leave with a three-legged dog or a one-eyed cat.) And it didn't hurt that she was partial to husky-types.

Today, Encore is Hachi. He no longer sleeps in a filthy crate in a dark hog stall, but in a bed with the boy who is his constant companion. He doesn't have to fight for food. And his walks in the crisp autumn sunshine fill him with joy, not fear of all the unfamiliar smells and sounds.

Encore has had a second chance -- a reprise, if you will. He is really home at last and can be a true dog in the best sense of the word. He will love his people no matter what. He will never tire of being with them nor want any other life but the one he has. The story of his life now has a wonderful ending.

Not to brag, but we knew this would happen. That's why we stood by him through the long months of his recovery. So that he could have the privilege of standing by his people. That's really all a dog wants. And for Encore, it was worth the wait.