SUNDERLAND, Md. -- Kirstyn Northrop Cobb has a type: big and stocky, with cropped ears, and in imminent danger of being euthanized.

On a recent Thursday, she drove her truck to a local animal shelter to collect a couple such specimens who'd caught her eye online -- and who would probably be put down, soon, if she didn't take them away.

"I pull from where needs me," said Northrop Cobb, who then started rattling off names of overstretched government facilities within a reasonably short drive of the Humane Society of Calvert County, the private no-kill shelter she helps to run in rural Maryland. "Goes by how much space we have. We don't euthanize for space." Cobb's shelter can hold about 30 dogs at a time. 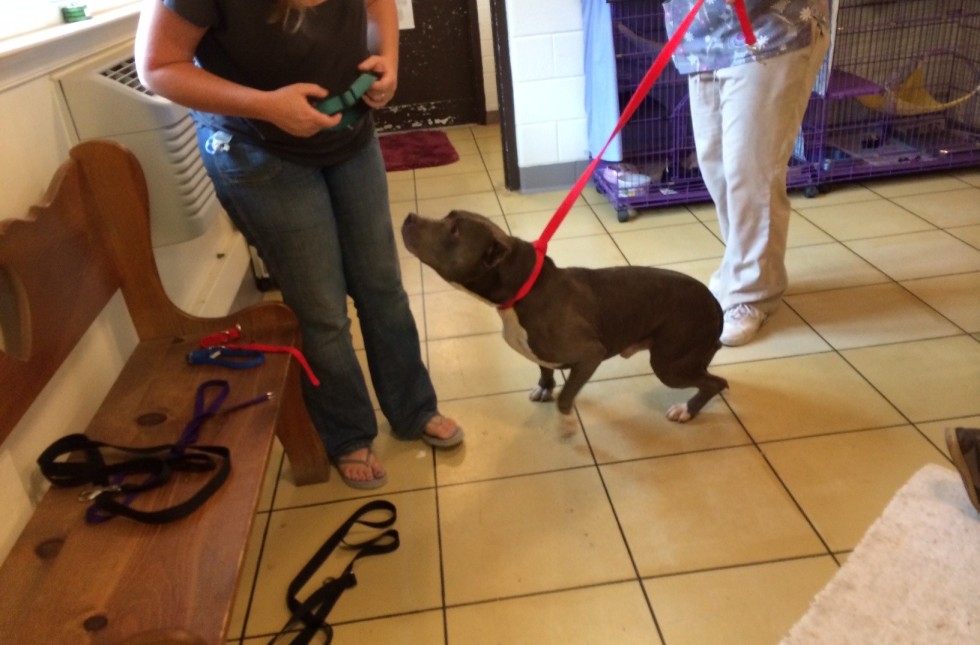 Lenny with Kirstyn Northrop Cobb, on his way out of the Tri-County Animal Shelter. Photo by Arin Greenwood.

In recent years, there has emerged an under-the-radar mass movement of animals being shuttled between shelters and rescue groups in an attempt to save as many of their lives as possible.

Call it the great dog migration -- or the "under-dog railroad," as Erika Proctor, founder of Green Dogs Unleashed, a rescue group focused on blind, deaf and amputee dogs, puts it.

There's a Staten Island group that specializes in finding Yankee homes for dogs pulled from high-kill shelters in the South, and a California-based rescue just put out a notice that it's looking to trade Spud, a pit bull who's been in a kennel for more than a year, for a dog from another group, just to give Spud a change of scenery until he finds his permanent home. (He's a great dog, as you can see in his adoption video.)

Proctor said that Green Dogs Unleashed "has saved over 500 animals from local rural shelters so far this year alone," and is willing to take dogs from all over the country. She just needs volunteers to make the haul, or at least a part of it.

One deaf puppy named Skylar had to travel all the way from Georgia to Virginia, said Proctor, so the group had about a dozen volunteers "drive her each an hour and relay her."

The American Society for the Prevention of Cruelty to Animals has only just started collecting data about how many animals are moved from place to place by the 13,600-odd independent animal rescue groups and shelters around the U.S. These groups are working to bring down the number of healthy animals euthanized in shelters every year. Right now that figure stands at about 2.7 million, down from 3.7 million in 2008 and between 12 and 20 million per year in the 1970s.

But even without official statistics, "we do see that animal relocation is becoming a more widely used practice," said Sandy Monterose, senior director of community initiatives for the ASPCA, which has launched an initiative to make it easier for shelters and rescue groups to work together to identify and transport rescuable animals.

Morabito said that transferring cats and dogs out of the shelter to other rescue groups has been an important part of getting the organization's "live release" rate up to where it currently stands, at more than 70 percent. It's been a remarkable achievement for BARCS, which as recently as 2005 was euthanizing up to 98 percent of its animals every year.

At BARCS, Morabito is one of the staff members who has to make the heartbreaking choices as to which healthy but homeless animals will be euthanized to make room for the new ones constantly arriving. She keeps, and cries over, the photos of each one.

She said she'd like to see even more rescue groups coming in to take some of the hundreds of cats and dogs -- here in Baltimore, it's mostly pit bulls -- who are friendly, healthy and loving, but who may, on any given day, run out of time.

"I want to get to the point where every healthy animal is saved," Morabito said, wiping her eyes. 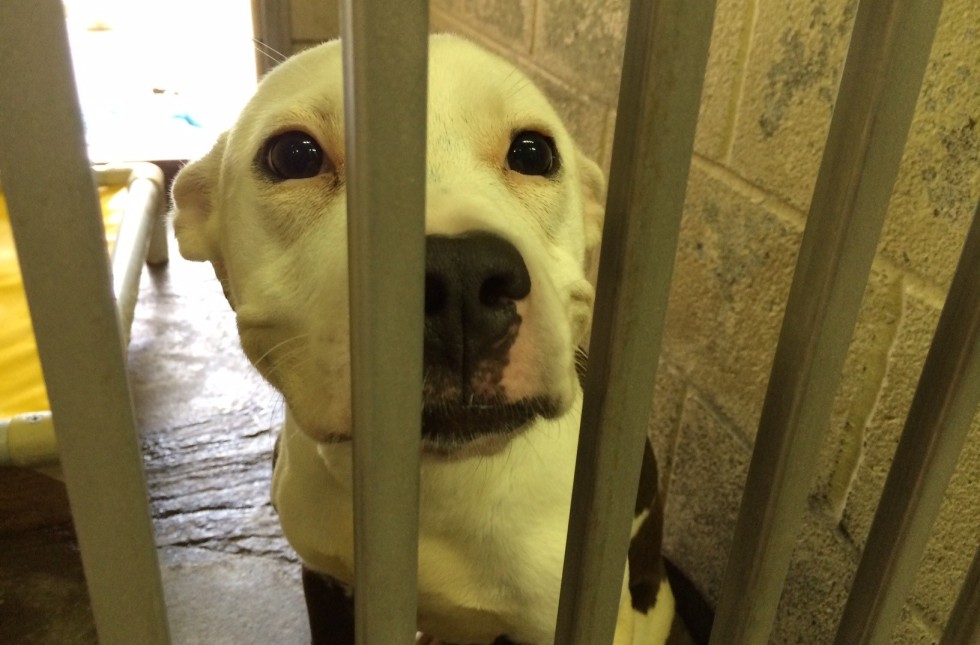 Ethel in her kennel at the Tri-County Animal Shelter. Photo by Arin Greenwood.

Northrop Cobb arrived at the Tri-County Animal Shelter in Southern Maryland, ready to collect the two pit bulls she'd planned on bringing back with her. One was a "blue crop," meaning he was gray like a seal and had his ears chopped off. The other was a brindle whose ears were intact.

Their names were Lenny and Quinn, and Northrop Cobb's trip meant that they weren't going to be put down. The Tri-County shelter has a policy of not adopting out pits, or other big dogs, to families. Those big unlucky dogs can only be taken by rescues. And while the odds of rescue may be getting better, they are still not good.

The Tri-County shelter takes in around 11,000 animals a year, according to shelter manager Kim Stephens, but it can only house a couple hundred animals on any given day. Stephens explained that about 3,500 of those pets go out to rescue groups like HSCC (though many such groups don't have facilities, but rely on foster care for the animals). Another 800 or so are adopted out to families. Some 1,000 are returned to their owners. The rest, she said -- about 5,700 -- are euthanized.

While waiting for the pits to be brought out front, Stephens told Northrop Cobb about a Great Dane who was also in the shelter. It was't long before this dog was brought around too. She was tall and emaciated, and named Gladys.

"That is one skinny Great Dane," said Northrop Cobb. She took another walk through the shelter -- cage after cage after cage of dogs; lots of beagles; some fluffy shepherd-type dogs and hounds; and so many pit bulls, like a tiny brown-and-white wiggler who didn't even have a name yet -- before heading out. 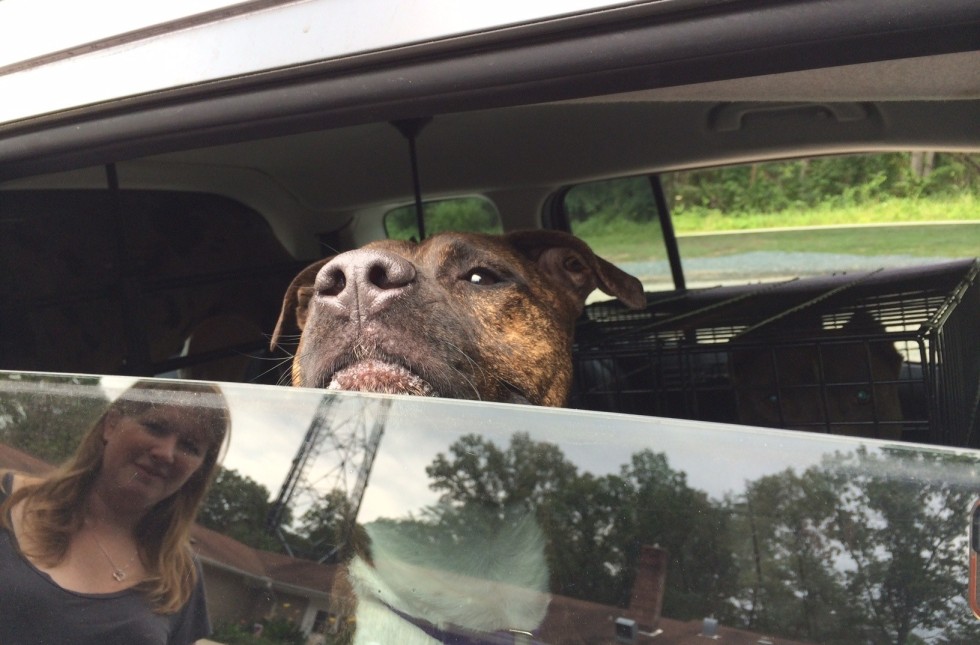 Quinn on his ride to the Humane Society of Calvert County, where he is now available for adoption. Photo by Arin Greenwood.

Lenny and Quinn, the two big pits Northrop Cobb came for, were loaded into crates in the truck. The Great Dane got the run of the trunk. The tiny pit, it turned out, was also coming. She sat on the front passenger seat. She smelled like pee, and kept sticking out her tongue. Northrop Cobb said all the dogs would probably vomit during the 20-minute ride back to HSCC along a twisty road. They didn't.

Northrop Cobb described her plans for the dogs, which included baths, play groups and cheerful Facebook posts extolling their many virtues as canine companions. But first, the little one was going to need a name. Not Lucky, said Northrop Cobb, because then "she'll be hit by a bus."

Northrop Cobb said she'd been naming too many dogs recently -- a bunch had just arrived at HSCC from a puppy mill raid, on top of the usual rescues -- and she was experiencing a little name fatigue. But finally she settled on Ethel, since it sounded right and didn't seem to invite tragedy. 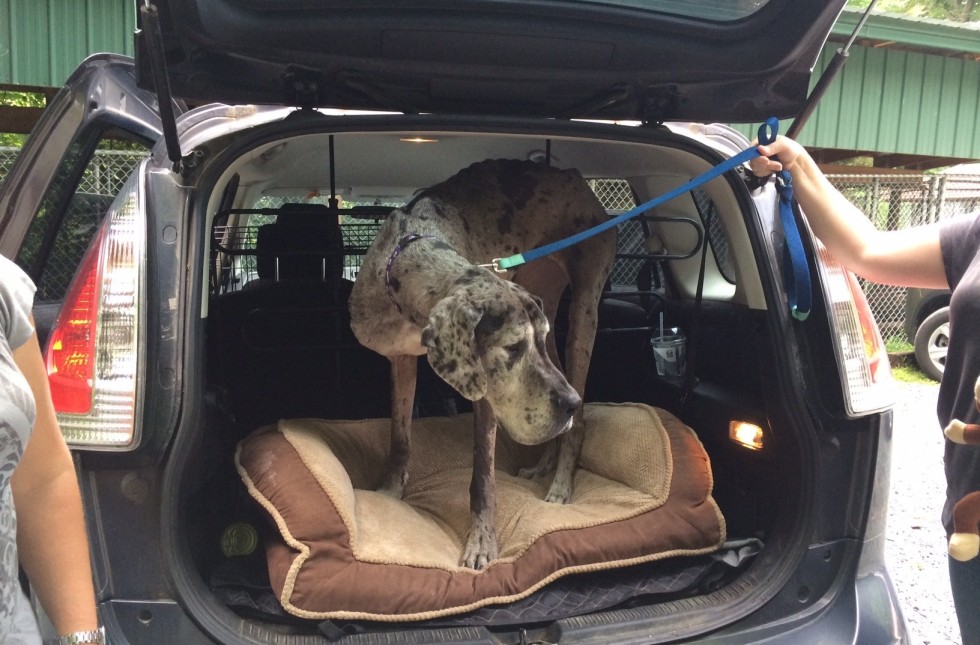 Gladys the Great Dane prepares to step down from Northrop Cobb's truck at the Humane Society of Calvert County. Photo by Arin Greenwood.

It's not uncommon to see photos of just-adopted animals leaving the shelter with their new owners -- what shelter workers call "freedom ride" photos -- in which the animals look joyous and relieved. The four dogs traveling with Northrop Cobb, on the other hand, seemed a bit shellshocked as they were unloaded from the car, fussed over by shelter staff and volunteers, and given peanut butter-filled toys in their new kennels.

But those Facebook posts, and baths, are really effective. Within a couple of weeks, Gladys, Ethel and Lenny had all been adopted. And in these photos, with their new families, they really do look completely blissed-out, at long last. Here's Ethel, going home:

And even Quinn, who is still at HSCC -- you can see his handsome mug in the photo below -- is "doing very well," said Northrop Cobb. He's "in play groups daily and loving his time with the other dogs."

She's already put out feelers with the local shelters for some new rescues, she said, "including a naked, mangy Shar Pei. It's the ugliest dog ever, and I already love him!"

How you can help: Reach out to your favorite rescue groups about volunteering to do animal transports, or taking in a foster animal. It's really that simple. Some Facebook groups have also been set up to help facilitate the movement of rescue pets. Here's just one of them. And Green Dogs Unleashed has a Facebook post asking for help in Virginia this weekend:

You can reach the author of this story at arin.greenwood@huffingtonpost.com if you have an animal story to share.