Steven Spielberg's latest heroic film, War Horse, is ultimately a sentimental love story between a young English man and his horse -- a magnificent chestnut thoroughbred named Joey. Both man and horse go off to battle in World War I, get separated and barely survive the horrors of trench warfare, only to be reunited in a miraculous scene of mutual recognition amid the chaos of war. It is hard to resist the lure of this heart-tugging film, but beneath the emotion lies a more fundamental question: Should animals be used to fight human wars?

Spielberg realistically portrays the central role that six million horses played in that deadly war, serving as mounts for cavalry units, pulling ambulances to rescue the wounded and laboring to draw heavy artillery across mud-drenched terrain. The losses of human and animal life were both staggering.

But, the use of animals in war goes much farther back than WWI, and much farther forward too, and spans more species and places than we would expect. Elephants, camels, dogs, dolphins, sea lions and carrier pigeons have been used (or are currently in use) on the battle front in various parts of the world. Right now, for instance, the U.S. Army is exploring the use of the African giant pouched rat to detect landmines, and the Navy uses dolphins as underwater defense sentries to guard against intruders in U.S. ports.

I have a personal connection to this issue. Before I was born, my father, Alton Desmond, served in the dog training unit of the U.S. Coast Guard in WWII. One of my treasured possessions is a large photograph of him, his buddies and their German Shepherds training on a base in New England. The men are impossibly young and happy in their white uniforms, and the dogs by their sides look eager and muscular, poised to detect enemy infiltration of our nation's coasts.

I've always looked back nostalgically at this photo, symbol of a tight dyad of human and animal, united in the service of national safety. But lately my attention has turned more to the larger issues and questions that such a partnership represents, and which the romanticism of this image (the same one that lies at the heart of the Spielberg film) can make hard to see.

Today, more than 2,700 dogs are working in the military, up from 1,800 a decade ago. About 600 of these serve in combat zones, sniffing out explosive devices, clearing buildings and tracking enemy fighters. Dogs, like human soldiers, can suffer the fear, anxiety and loss that marks a warzone. They come under attack. They sometimes die and sometimes return home emotionally damaged, just like some of our human soldiers. (Indeed, recently scientists extended a diagnosis of PTSD to canines who served in war zones, and the military is attempting to rehabilitate these animals if possible. Still, some are euthanized if they are deemed unadoptable.) 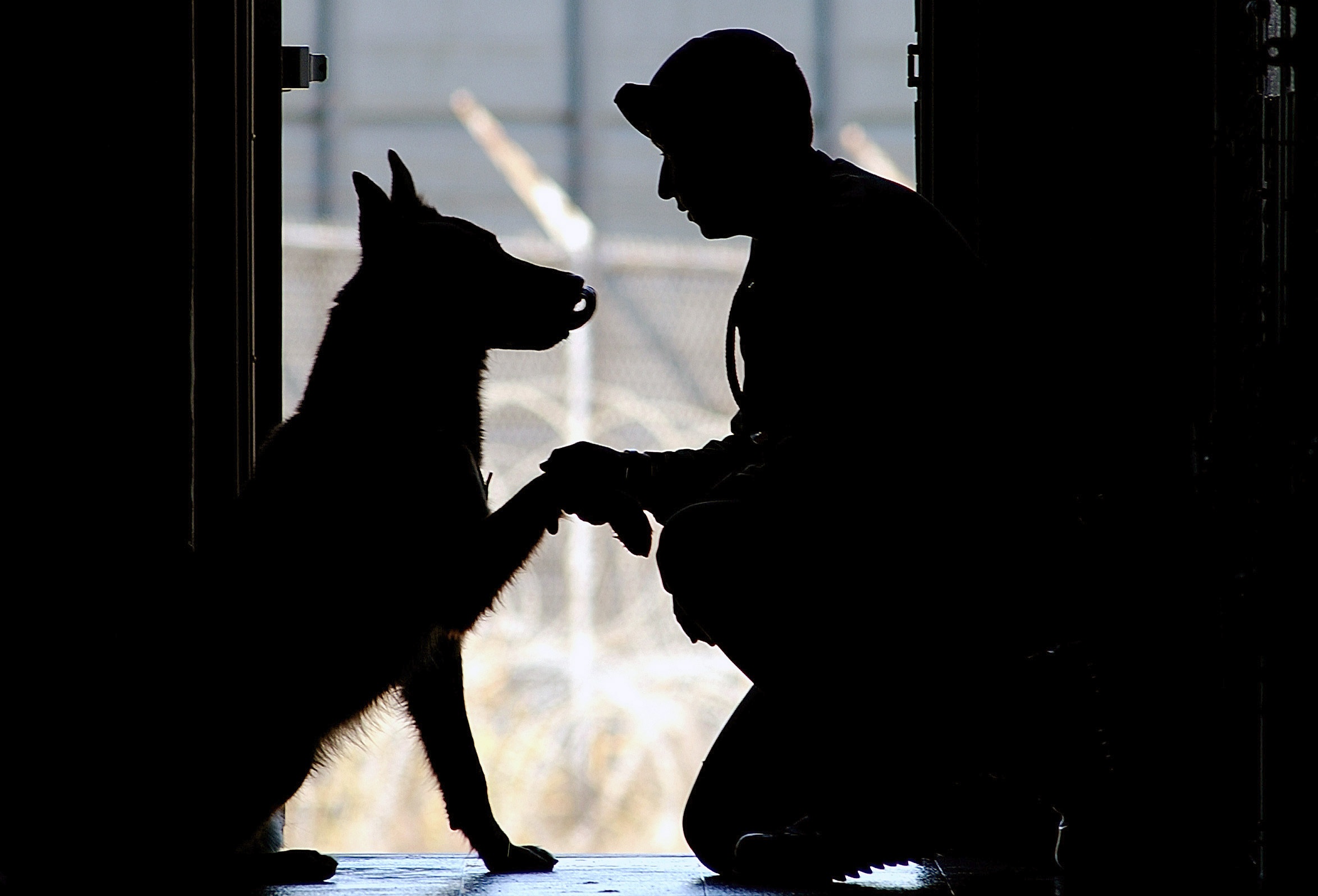 Soldiers and dogs both suffer in war but there is a key difference. Soldiers in our all volunteer army choose to enlist. Dogs do not, and cannot, make such a choice to put their lives in danger in service of a nation's interests. Does this matter? At the very least, Spielberg's film asks us to reconsider this question and to discuss the pros and cons of using animals in war today.

Those who agree with a world view that gives humans dominion over non-human animals will doubtless find that putting dogs in the service of humans, of saving our lives, is a good, even noble, thing to do. We recognize the dogs' service with ranks and medals, and commend their loyalty and bravery. We salute the bonds between dog and handler, and strive to reunite them when the soldiers return home. Numerous recent news stories attest to the powerful emotional connection of the soldier/dog bond. That is undeniable. But is it the point?

Many people would say no, especially if they ascribe to a view that the Judeo-Christian concept of "dominion" should be interpreted as "stewardship," as Mathew Scully argues in his widely-read book Dominion: the Power of Man, the Suffering of Animals, and the Call to Mercy. This part of our populace will surely question military uses of animals, whether canines, dolphins, or even rats.

Clearly, there are parallels to the use of dogs in police work and search and rescue work (recall the indelible images of working dogs in the 9/11 rubble). Some of these jobs do place a dog in jeopardy, but little can be as dangerous as a war zone. That degree of risk is one that surely will elicit strong opinions on either side. Let's use the Spielberg movie as a time for a national dialogue on this issue. Should animals still be used in war zones? Or is this, like the cavalry in WWI, a practice that should belong to the past?

Jane Desmond is Professor of Anthropology at the University of Illinois at Urbana-Champaign, and immediate Past President of the International American Studies Association. She has written widely about human/animal relations, including her book Staging Tourism: Bodies on Display from Waikiki to Sea World.