Do All Dogs Go to Heaven? When we ask such a question or "Do animals have souls?" what are we are really saying? We are revealing a deeper existential and theological question about how human beings relate to other living creatures. No one can know the actual reality of the afterlife, but what we believe about it says something about what we believe about life. Our ideas about animal "souls" is, therefore, really about whether humans are unique among living creatures and determining the spiritual distance or ontological gap between humans and the rest of life. What we believe about this issue will affect how we treat animals.

For most of history in many cultures and tradition including Judaism humans saw themselves as qualitatively different and "above" other forms of life. This was the "Great Chain of Being" in which non-life was at the bottom, followed by plants, animals, and then humans, angels and finally God at the top. With Darwin's theory of evolution, this concept had to be abandoned since the decent of species showed that all living organisms came from a single ancient ancestor. Humans could no longer claim that there was a qualitative difference between themselves and other forms of life; the difference could only be quantitative. The toppling of the sacred hierarchy was completed by the discovery of DNA. The DNA of every living thing (including plants and microbes) has a large share of commonality and humans, in particular share a large percentage of their DNA with other primates -- in the case of chimpanzees, around 96 percent.

In the face of this new science which our ancestors could not have conceived of, what can we do with our Jewish classic sources?

In the Hebrew Bible as usual has more than one voice coming from a variety of different authors from different time periods and ideologies. (It must be noted that the Hebrew words nefesh [life], neshamah [breath] and ruah [wind] which are often translated as "soul" which in later Jewish sources connotes a spiritual entity or self within the body do not have that meaning in the Hebrew Bible.) Here are a few examples:

In Genesis 1 all animals are created through the medium of the sea (fish and birds) or the earth (domesticated animals, "creeping things" and wild animals) and only humans are created directly by God and in the image of God. Humans therefore are given control over all the other animals as agents of God's power over the earth (see also Psalm 8). This source is probably the major basis for later beliefs about the ontological gap between humans and animals. The concept of the "image of God" was interpreted in various ways in later Jewish sources but it eventually was understood that humans had a qualitatively different "soul" than animals

In Genesis 2 the animals created are separately from humans as aids or companions to the human (adam) but both come from the common source: adamah (earth) and both have a nefesh hayyah: an animating life-force or breath of life that comes from God. The human, while made of the same earthy material as animals and infused with the same animating force are nonetheless created first. The animals are created as adjuncts to the human. All life that moves and breathes have the nefesh hayyah which like the wind allows them to move but trees and plants do not since they do not breath or move.

In Ecclesiastes 3:18-21 the author believes that humans are no different than beasts: they both have the same ruah, the animating spirit. After death, they go the same place, the earth.. The author of Ecclesiastes, which was probably written in the 3rd century BCE when Greek ideas began to influence Jewish society, was aware of the idea that claimed that humans had a "soul" which survived after death and rises to the heavens to be with God. (The rejection of this idea is also probably found in Job 14:12-14)

In Psalm 148 all life is depicted as a community of worshipers and humans do not have pride of place. In Psalm 104 God seems to be equally concerned with both human and animal life. And in Job 38-41, the author describes a world without people and thereby claims that humans are not the center of God's concern -- God cares for all life of which humanity is only one part.

These biblical texts show a wide variety of ideas about the status of humans and animals in relation to each other and in relation to God. Only in Genesis 1 is there a significant gap between them.

In the second Temple period (500 BCE to 70 CE) many (but not all) Jews accepted the dualistic Greek idea of the body and soul, and the ontological space which separates humans from animals. This was also true in the Rabbinic period (post 70 CE) but the rabbis did not see this gap as a "hard dualism" as they understood that human beings have both animal/ bodily characteristics and divine/spiritual characteristics (See for example: Midrash Genesis Rabbah 7:11 to Genesis 1:27). They reinterpreted Ecclesiastes 3:18-21 to refer to the wicked who will have no place in heaven unlike the righteous (Midrash Ecclesiastes Rabbah 3:18 §1).

In Medieval Jewish philosophy, the concept of the soul became influenced by Platonism and Aristotelianism and while there are a variety of views about the nature of soul in all life, the human soul was seen as qualitatively different. Human souls had a rational expression which connected humans to the ultimate rational soul of the universe -- God. This rational expression was what would survive after death in communion with the divine. And although Saadiah Gaon (882-942) believed in the possibility of animal resurrection within limited circumstances (Book of Beliefs and Opinions 3:10), most Jewish thinkers like Moses Maimonides (1135-1204) rejected any idea that animals survive death (Guide for the Perplexed 3:17). For Maimonides animals existed under the general providence of God which meant that they were subject to natural law and its contingencies.

For many of us today, we are not believers in the Jewish ideas of the afterlife that became almost a dogma by the Middle Ages. In addition there is a significant environmental critique of the dualism of spirit/soul and matter/body which denigrates matter and can lead to a lack of concern for the natural world and its non-human life. Modern evolutionary science and genetics has also shown us how closely we are connected to all life and while there are individual species, the lines dividing them are not rigid and in many cases one species "blends" into another.

And many so-called unique "human" traits have been found to originate in animal behavior like tool making, language, altruism, cultural transmission, and social grouping. Recently there was a story in the New York Times of how it is possible that chimpanzees exhibit a kind of mourning and death ritual which throws an interesting light on the origin of human ritual behavior
.
As an eco-theologian, I believe that we must return a more biblically based unified vision of life. All life (and now we can even include plants) have the same basic characteristics: it seeks to survive individually and as a species and all have a kind of nefesh hayyah. The differences between humans and animals is one of degree and is in degree not in kind -- human differences can be seen within context of each species being unique in its own way.

For us the question is one of value and responsibility: how much do we value non-human life? Are other creatures only valuable to us as resources to be exploited or do we see them as fellow members of the Creation choir of Psalm 148? I believe that the Jewish tradition asks us to exercise responsibility not arrogance. We are all part of the universe, formed out of the dust of stars and all part of that special expression of Creation which is life. 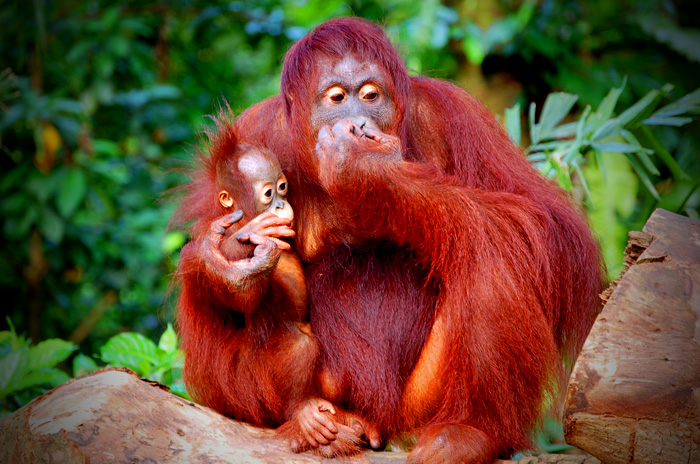 (The original version of this article originally appeared on Jewcology.com)