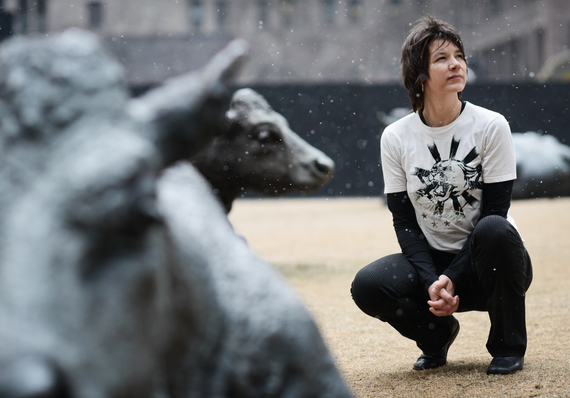 The Ghosts in Our Machine is a powerful new feature documentary about animal rights, made accessible through the photos and personal journey of well-known international photographer Jo-Anne McArthur.

Directed, written and produced by lesbian filmmaker Liz Marshall, this is a haunting, yet beautiful movie that I highly recommend you see on the big screen.

The film was among the 151 eligible, qualifying documentaries for the Academy Awards, but it did not make the top 15 list. It has been playing at festivals and theatrically, and it runs in December 6 through 12 at the Music Box Theatre in Chicago.

Just confirmed, acclaimed and award-winning actor James Cromwell (of Babe and many other films) will introduce the film on Saturday, December 7 at 7:20 p.m.

As you might expect from a film about animal rights and abuses, it can sometimes be difficult to hear and see what is happening across the world. But one of the more powerful comments is about the abuse in the U.S., based on the large factory farms and billions of animals that are processed in those places each year. Another fact that is hard to digest is that the animals that are not killed -- those that are worked for milk, eggs and other products -- actually face a longer life of abuse, especially those that are used as breeding animals.

As a relatively new vegetarian myself, I have often thought about how we make decisions on what rights to fight for. I've worked a long time on civil rights, but have felt torn about the animals right in our midst. This is not about just gorillas in Africa, or dolphins in Japan. It is also about pigs, cows and chicken's rights in the U.S.

Our interview was appropriately conducted at the Chicago Diner, a vegetarian diner on Halsted Street in Boystown.

Tracy Baim: How did this subject interest you? You have done documentaries on water rights, HIV/AIDS in Africa, etc., so what is something specific that drew you to this subject now?

Liz Marshall: I had always been sympathetic to the issue, and interested in exploring it, but very, very preoccupied for years with one project after the next focusing on human-rights issues, and then, more recently, on environmental-rights issues. It was actually my partner, L.P., who really challenged me to tackle it. For years, it was incubating, she was always the person I would debate the most with, and use as a sounding board. My last project did well, and I knew I wanted to make another feature film documentary, and I knew I wanted it to be this one. But I didn't know what I wanted the story to be -- I didn't want it to be an issue film, I wanted it to be a story, grounded in a human story. That's when I decided I wanted to focus it on [photographer] Jo-Anne McArthur.

Had you worked with Jo-Anne before?

I knew Jo-Anne for years, through my partner, and I noticed her images. I felt inspired by them for two reasons. One, I felt a sort of kinship to her, because we're both documentarians. But I'd never met anyone who was solely focused on the animal issue in documentary form. I found that quite interesting. Second, her images invite the viewer to consider non-human animals as individuals, and I think that's quite revolutionary. I wanted the film to invite viewers to consider that animals are sentient beings.

How long ago did animal rights become an issue for you?

I've had my own journey with it. I really do think it's a journey, and that is an active word -- a key word to describe it. It's not something that happens over night. I know for myself, it's been a layered process. But it started for me when I read Diet for a New America [by John Robbins] when I was 19. That's an amazing book that makes the connection between human rights, environmental rights and animal rights. It really struck a chord, and it really drastically changed the way I eat. I became a vegetarian at that time.

But it was also something that I didn't necessarily hold on to. I needed to be reminded. I think with this issue, it's easy to want to forget, or ignore it. So I wanted to make a movie that could reach people that were like me. What I mean by that is: People who already care, but, I think, need to care in a deeper way.

I became a vegetarian because my partner and I drove next to a pig truck, and we could see all the pigs' snouts, just like the tragic scene in your film. We looked at each other and became vegetarian on the spot. That scene was incredible. What was interesting to me is what you said: It's a journey. But the film shows there is no degree. An animal is an animal, whether used for research or food or clothes.

In the movie, all four main animal industries are explored in an equal way. The moral question posed is, really, if animals are to be used at all, consumed and co-modified, or do they have an inherent worth that we're not seeing, collectively, that needs to be acknowledged and taken seriously, as a significant moral-social dilemma. Whether it's research or a fur coat, it's the same. All of these industries have reduced animals to tools for production, and bits and parts of ingredients. In my view, and what the film is trying to communicate, is that the continuum is all connected, and what we're seeing in mainstream culture is an emergence toward new technologies, new ways of manufacturing and creating food, that are alternatives to using animals. That's really a revolutionary thing that's happening now. The film is part of a zeitgeist of awareness that's happening, and starting to take root. They're hand-in-hand -- the whole thing is connected.

The pet industry, people owning animals, is probably the most difficult situation to address.

The film doesn't address that, that's a whole other thing. My partner has rescue cats. [The film features people who have rescued Beagle dogs from research facilities]. Rescue cats -- that's the other lesbian cliché.

About this connection of civil rights and human rights: is the LGBT community more sensitive, or just like the mainstream on this, with various levels of understanding?

I don't think the LGBT community necessarily embraces other social issues. Certain pockets do, for sure. But as a whole, I don't think it necessarily does. I am more, philosophically in my life, at the point where I think the intersectionality of all of it matters the most. I was one of those human-rights-focused people that was looking through glass, on the other side of the glass, when it came to the animal-rights issue. I wanted to make a movie that would shatter that divide. Break it down and unpack it for people in a way that was accessible. It is all connected. Some people misread or misunderstand what I mean when I say that. I have had people say: So you're saying animals should have the same rights as people? I don't know what that means, but it's not the right question to ask. The right question is: Do animals also matter? The answer is Yes. The movie focuses on our industrialized, globalized world that uses animals as products. For our use. So, it's really about raising awareness and posing the question about that, as opposed to, what is a hunting-and-gathering society.

The film deals with Jo-Anne as she discusses the placement of her powerful images of animals into mainstream media. Some outlets would not want to show the brutality animals face.

Jo-Anne's been published all over the world. I wanted to feature that story in the movie, because it parallels the challenge in mainstream society, for mainstream media to really take this seriously. That was the purpose and meaning of those scenes. On a grassroots perspective, she's been published all over the world. And her book is out, We Animals.

The film also shows how this work can emotionally impact people, including Jo-Anne.

I think that highly empathetic people can run the risk of burning out, because the degree in which you feel connected is, I think, amplified. You have to develop coping mechanisms. This connects to the article I wrote for you about empathy. I am genuinely curious about the capacity for empathy and how that gets developed. I have always been empathetic, but my empathy for this issue has grown. I think you can develop it; I think everyone can develop it. In the movie, Jo-Anne says she believes everyone is innately compassionate, and given the opportunity to care, they will. I think that's a great moment in the film. It comes at a time, near the end, in the final act, where the thesis of the movie, the animals themselves and Jo-Anne's journey has been fully expressed. I think the average person watching it feels pretty impacted by those words.

What has been the response from PETA, People for the Ethical Treatment of Animals?

They love it. Ingrid Newkirk, the founder of PETA, she wrote an endorsement equating the film to Uncle Tom's Cabin [the anti-slavery novel]. People are really saying that the film is an incredible tool, because it's able to communicate with a broader audience.

For those who work on LGBT rights, and see how much there is still to do, it can be frustrating at times, deciding what issues to focus on, including animal rights.

Why does it have to be either/or? Why can't we redefine what that means, to be an active participant in social justice? One of my favorite quotes is by Martin Luther King, Jr., he says: "Injustice anywhere is a threat to justice everywhere." I totally agree with that. There's a major disconnect happening. I am a social issues filmmaker. I go from issue to issue, film to film. What I've arrived at is that most of those things become their own insular bubble. You could be sitting, eating a ham, and fighting for the rights of people overseas, because of the suffering of those people. But what about the suffering of what you're eating right now? I think it's important to recognize what King said -- that it's all connected. It's like when a revolutionary leader in the human-rights movement doesn't treat women with the same respect and dignity, who doesn't believe in the rights of women, but believes in the eights of men.

I wanted to also mention the intersectionality with animal-rights and queer issues. Some of the most inspiring people who are doing this work happen to be queer women and men. Really inspiring, cutting-edge analysis, bringing all the pieces together. For example, Nathan Runkle, who founded Mercy for Animals.

Showtimes for the Music Box run are here. Marshall will be at the screenings this weekend, including a Q&A December 8 at the 2 p.m. screening.

The film will be available for community screenings and video on demand starting in February. See http://www.theghostsinourmachine.com.

See an essay by Marshall here.