It's not just that they're indescribably cool or painstaking to make -- no, Rube Goldbergs are so captivating because they're animation that happens in the real world.

If you're not familiar, a Rube Goldberg Machine is any complicated contraption built from everyday objects arranged into a long chain-reaction to accomplish a simple goal. The winner of the 30th annual Rube Goldberg Collegiate competition in 2014 (yes, they've been competing for 30 years) zipped up a zipper. In 75 steps.

If you've ever stacked dominoes in a row, you've built a Rube Goldberg Machine. Welcome to the club, nerd.

The beauty of "Rubes" is that it doesn't matter what parts they're made of -- ping-pong balls and dominoes, or hammers and balloons -- or what they're goal is -- these machines captivate people by bringing everyday objects to life. Rube Goldberg machines are stop-motion animation in real-time, moving the action along like a story. But more on that later.

First, let's get to know these contraptions better by looking at their history.

It's no coincidence that the creator and namesake of the Rube Goldberg machine -- Reuben Lucius Goldberg (born 1883) -- was a famous cartoonist and animator.

Originally a trained engineer (he received his degree from Berkeley in 1904), Goldberg's passion for illustration led him to leave a promising career designing sewers for the City Hall to draw illustrations part-time while he swept the editorial floor at the San Francisco Chronicle. He made a whopping $8/week at his new career and never looked back.

Goldberg's imaginative illustrations "quickly ensnared the public's interest," and by 1915 his comics were the toast of the art world, earning him over $100,000 a year ($2.3 million today).

His work was syndicated in New York Dada (published by Marcel Duchamp), The Literary Digest, and he went on to found the National Cartoonists Society in 1946. Goldberg even received a Pulitzer for his animations. Shortly before his death in 1970, Goldberg's work was curated by the Smithsonian in an exhibit aptly titled "Do it the Hard Way."

In 1931, Rube Goldberg machines got so popular that Merriam-Webster adopted the word "Rube Goldberg" to mean "an adjective defined as accomplishing something simple through complicated means." Goldberg himself said the machines were: 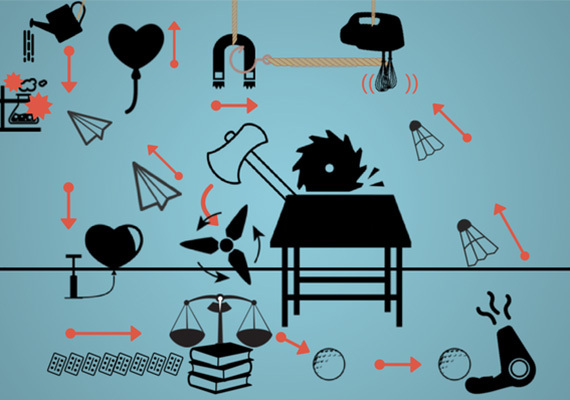 To understand how animation itself is a type of Rube Goldberg machine, let's examine the first feature length animated film ever created - Snow White and the Seven Dwarves, released on Feb 4, 1938.

Over 570 animators and water-color artists labored for nearly five years to compile two million sketches and paintings, though only 166,000 made the final film. Production soared over budget by $1.25 million (6x the original figure), and Hollywood insiders described the film as "Disney's Folly."

Talk about "maximum effort" for just an 83-minute cartoon. But that's the exactly the point.

Snow White isn't just a "cartoon," and far from the "folly" predicted by Hollywood professionals, Snow White became one of the most cherished films of all time. It single-handedly transformed "cartoons" - a medium widely discredited at the time -- into the respectable, lucrative creative field we recognize today. Five years of foolish toil resulted in a timeless tale.

Snow White's initial release earned $8.5 million at the box office making it the most successful movie ever. Fast forward to 2014 where Frozen became the first animated film to gross $1 billion. Rube Goldbergs -- as animation -- are alive and well.

But here's the wonderful thing about Rube Goldbergs and animation -- no one needs them. Not even a little bit.

People don't need a self-operating napkin anymore than they need quality animation for their product. Hundred of studios churn out cheap, cookie-cutter animation -- and they manage to eek out a profit. But the bottom-line was never a concern for Goldberg, or any of the great animators -- from Disney to Miyazaki -- and it's exactly that disregard for convention that makes Rube Goldbergs and quality animation so adored.

Every Rube Goldberg and every great animation is unique - hand-crafted to fit the situation - and their success depends solely on the skill and vision of the creator. Whether it's nailing a walk cycle or stacking 1,000 dominoes - each has their technical challenges, and when it's done well, a story inevitably emerges.

A story from a bunch of things crashing into each other? Absolutely.

Rube Goldbergs are packed with drama. Will the fan blow the book over? Why is that sledgehammer pointed at that T.V.? Will the glass shards fall on the scale and tip the bag of marbles? What if the marbles roll the wrong way?

It's been 100 years since Goldberg illustrated his first contraption - "Automatic Weight Reducing Machine," in 1914 and people are still coming back for more.

OK GO's music video for "This Too Shall Pass" features an astounding Rube Goldberg, and over 43 million people have flocked to see it.

Quality craftsmanship and imagination stand the test of time.

Jonathan Gottschall's book The Storytelling Animal talks about how people inherently crave storytelling, and we'll find it anywhere -- from dancing mice and fairy princesses to a cog rolling down a plank.

I love Rube Goldberg machines and animation, but maybe I'm just old-fashioned. I take pleasure in all the world's perfectly complicated contraptions because for all their bells and whistles, squiggly lines, and non-sequiturs, they do something so beautifully simple amidst the chaos.