The latest episode of Gay TV on the Go's LGBT politics show Critical Thinking Hosted by Waymon Hudson focuses on the anti-gay myth that has been blocking LGBT equality progress for decades: the vicious and debunked "Save Our Children" argument that gays are somehow dangerous to children. It is a narrative that we see far too often in political discourse, cultural issue debates and legal fights. Law Professor Anthony Niedwiecki, who teaches "Law and Sexual Orientation" at the John Marshall Law School and has written extensively about this long-debunked argument, discusses this false narrative, from its historical roots in the days of Anita Bryant to its use in political campaigns to its current place in cases being heard by the Supreme Court. It is a timely discussion, as we still see these arguments being used in debates and discussions over LGBT rights. 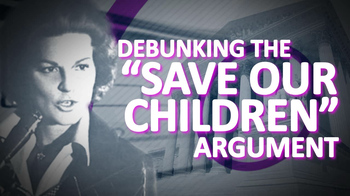 Though this argument is continually being taken apart in the long, deliberative, fact-based process of court cases, the emotional impact of the "Save Our Children" myth still holds considerable weight in cultural debates. For example, during the recent debate over the Boy Scouts of America possibly ending its ban on openly gay scouts and leaders, conservative commentators continued to push this long-disproven claim that gays are dangerous to children, in order to incite fear. People like Tony Perkins of the Family Research Council, televangelist Pat Robertson, Fox News host Mike Huckabee, Richard Land of the Southern Baptist Convention, the American Family Association's Bryan Fischer and Linda Harvey of Mission: America all pushed the erroneous and damaging connection between pedophila and homosexuality across various news outlets.

Looking at the just how deeply ingrained this damaging "Save Our Children" narrative has become in our culture proves how much more work needs to be done in our fight for LGBT equality. The idea that our community is in any way harmful to children not only affects every issue facing us, from marriage to employment discrimination, but it also dehumanizes us and devalues our families. 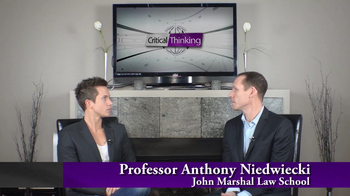 A new report from Political Research Associates, "The Right's Marriage Message: Talking Tolerance, Marketing Inequality," reveals the impact of the "Save Our Children" argument used by equality opponents and how we can continue to weaken its efficacy. The report showed that during California's Prop 8 campaign in 2008 and Maine's Question 1 campaign in 2009, nearly every anti-marriage-equality advertisement warned voters that legalizing same-sex marriage would force public schools to discuss same-sex relationships and sexual behavior with children, arguments that propelled both anti-equality ballot measures to victory. Yet in the 2012 election, fewer than half the ads in the four state ballot measures featured "Save Our Kids" messaging, and often as only a side note to the main theme -- and all those campaigns lost.

This clearly shows that our civil rights struggle isn't just about the important fight for passing laws and pushing court cases but about educating our fellow Americans about our lives, our families and our values. We must continue to point out and combat this long-ago-disproven narrative with our own stories of love. Only with constant vigilance, continued political and legal pressure and, perhaps most importantly, visibility can we relegate this offensive and damaging narrative to the dustbin of history, where it belongs.

Make sure you catch the entire interview on Critical Thinking Hosted by Waymon Hudson on Gay TV on the Go, and join the show's discussions on Twitter with the hashtag #CriticalThinkingTV, and on our Critical Thinking Facebook page.