The launch of the Xbox One has offered a parade of needless disappointments: a higher-than competition price tag, a potentially restrictive game-trading policy, and yeah, even a truly stupid, rape-insinuating joke.

But the let-downs didn't stop there.

Feminist Frequency blogger Anita Sarkeesian took issue with the fact that none of the games unveiled at Microsoft's Xbox One E3 press conference featured a female protagonist.

Thanks #XboxOne #E3 press conference for revealing to us exactly zero games featuring a female protagonist for the next generation.

Although there were a few exceptions, the overwhelming response to her tweet was negative, scathing and blatantly sexist.

Here's one of several free-market justifications of sexism in video games:

@femfreq You can already play bejewelled on your Obamaphone; if women bought games in significant numbers, the free market would provide.

Here's one of several reproaches that are straight out of 1950:

@femfreq were you expecting a cooking and cleaning game?

Here's the dumbest, most reprehensible response of them all:

@femfreq You are one dumb cunt, I mean that sincerely from the bottom of my heart.

You get the idea. Here are the rest.

Below is a word cloud of all the responses Sarkeesian posted to Feminist Frequency's Tumblr. And the details aren't pretty. 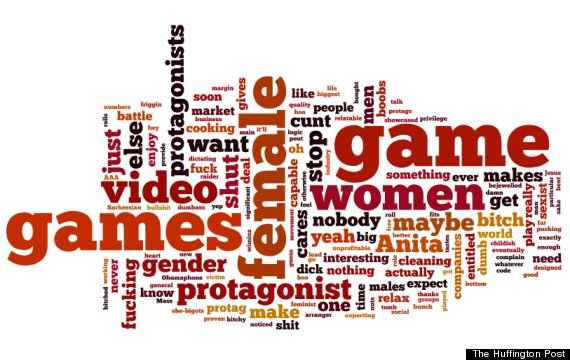 Gamers, it's 2013. As IGN pointed out in its defense of Sarkeesian's work, video games reach more people now than they ever have, so the question of sexism in games deserves to be discussed.

Without taking sides on the issue, one good example of said discussion is Danimalcart's Kotaku op-ed, in which he supports Sarkeesian's intentions but takes issues with her methods, as well as the media's coverage of the backlash against her.

Perhaps Twitter isn't the best forum for discussing feminism... or anything, really. But suffice it to say that turning to blatant sexism isn't the most constructive way to get one's opinion across.

1
Advice To Job Hunting Women
"Find something you're passionate about and just love. Passion is really gender-neutralizing," Marissa Mayer said on Martha Stewart's "Women with Vision" television series in 2011.
2
The Pie 'Isn't Big Enough'
"Right now is a great time to be a woman in tech, but there's not enough women in tech," Mayer told a CES2012 panel hosted by CNET. "[I] worry a lot of times the conversation gets really focused on what percentage of the pie is women. And the truth is, the pie isn't big enough. We're not producing enough computer scientist. We're not producing enough product designers. We need a lot more people to keep up with all of these gadgets, all of this technology, all these possibilities." Mayer also commented on the stereotypical culture within the tech world: "There's all kinds of different women who do this. You can wear ruffles, you can be a jock, and you still be a great computer scientist or a great technologist, or a great product designer."
3
Tangible Technology
"There's just huge growth and opportunity. [T]he fact that the technology is now so tangible in our everyday lives, I think, will inspire a lot more women to go into technology -- and I'm really heartened by that," Mayer said for the MAKERS "Women in Tech" interview series in 2012.
4
Internet Empowered
"I consider myself incredibly lucky to be present in a moment in time when this wonderful and powerful medium, the internet, is empowering geeks -- and especially female geeks -- to express and pursue their passions," Meyer said in a 2012 acceptance speech at the Celebrating Change gala. She had just won the International Museum of Women's first-ever Innovator Award.
5
Geekin' Out
"People ask me all the time, 'What is it like to be a woman at Google?' I'm not a women at Google; I'm a geek at Google. And being a geek is just great," she said in an interview for CNN's "Leading Women" series in 2012.