Toward the end of dinner, one of my companions insisted that the painfully thin, emotive, long blond haired thing in a small black dress with nearly exposed bosoms was none other than Ann Coulter. I did not believe him. Why would Ann Coulter, who hates homosexuals, go to dinner at gay ground zero? Why would she spend her hard earned gay-bashing royalties to enrich Jeffrey Sanker and otherwise support gay-owned businesses? 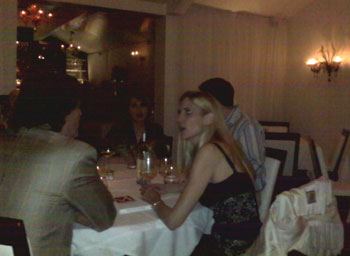 But sure enough, he was right. I could not tell if she was dining with people she hates or just demonstrating that she's a fraud who says whatever she must to sell books so that she can live the gay urban lifestyle. Based on her behavior last night, I am sure it is the latter, although based on her table mates, it could be both.

"I was going to have a few comments on the other Democratic presidential candidate, John Edwards, but it turns out that you have to go into rehab if you use the word 'faggot,' so I'm - so, kind of at an impasse, can't really talk about Edwards, so I think I'll just conclude here and take your questions."

Now, the last I checked, most gay people, including me, do not think the term "faggot" is endearing.

Notorious people have the right to dine where they please. I also think that they have to eat their own cooking. It's quite simple, really. If a person makes her money by being famous and that person has an addiction problem, she has the right to privacy to solve that problem. But if she proclaims her sobriety to get out of jail and then shows up at a bar, she has to expect that her public might inquire as to her truth. You can't have it both ways: sober for the police and the press; publicly drunk for real. In time, you are caught in the lie. It's one or the other, fame or privacy.

Clearly, Ann Coulter was caught in a lie. There she was, burbling like a fountain about her interview on Donny Deutsch's show in which she says Jews should be Christians, completely at ease in the heart of the gayest city on the planet. She was a natural with the gay men who surrounded her. She enjoyed the fawning attention by her two not so masculine male escorts, clearly in her milieu.

I was therefore shocked that when we tried to engage her in conversation, she became embarrassed, turned away, nestling her head inside her long, blond hair, much as would an embarrassed school girl caught stealing the answers to an exam.

We wondered if she was comfortable in West Hollywood, in a restaurant where a large number of the patrons are gay, and where the gay owners make money off of her dining bill. Her response (physically, because she would not speak): "I am too embarrassed to talk to you." Had we been able to see her high cheek bones, then averted and clutched in her hands to hide her shame, we'd have seen a red-faced hypocrite, caught living a lie. Think Britney Spears or Paris Hilton or others who make money simply for being famous and then have no clue how to respond when they are caught lying.

Ann Coulter loves the camera, so we snapped a few with a cell phone. Her sturdy female minder said we were "molesting" her. Ann Coulter molested by having her picture taken? I guess she's molested every day, then. She might want to check into rehab to deal with her addiction to such molestation.

When the manager came by with our check, he said, "Look, I'm sorry she's here, but I have to serve her." The staff were clearly appalled when they realized who was in their midst. Did Hitler eat kosher food even as he worked out the final solution?

Remember those "we reserve the right to serve anyone" signs? I assume they are for real. Had it been my restaurant, I would have sent her away, not allowed her to enjoy the life she craves. On the other hand, we have to wonder why Ann Coulter feels so comfortable among the gay men she hates. Clearly, she's just a hypocrite, saying outrageous, inflammatory, dangerous, un-Christian words simply to make enough money to pay for dinner in, well, West Hollywood.

Ann Coulter had nothing to say last night because anything she could conjure would have been too absurd. So she ducked her head, embarrassed at being caught where she most likes to be, hoping to disappear. Ann Coulter is a coward who uses evil speech in the safety of a studio to make money. She obviously does not even believe the obscenities she hurls at America, a country she says she hates.

How many adolescents in mid-America have heard Ms. Coulter saying they are "faggots," subhumans who should die, just so she could eat dinner at a gay-owned establishment and pay with blood money? How many lives have ended so that Ms. Coulter can giggle and guzzle in West Hollywood?

I do not believe in bothering famous people when they are out in public. But Ann Coulter created her fame and fortune by cultivating a persona of hate. She has to be called to account. Next time, I hope the folks at Murano or any other public establishment will just say no to the Ann Coulters of the world. Let Ann Coulter eat her own cooking. I doubt she can stand the taste of what she dishes, but it's worth letting her try.