In a recent appearance on The View to promote her latest book, Ann Coulter reiterated her well-known anti-immigrant stance. Guest host Ana Navarro responded, saying, "Let me point out that you're sitting at this table next to two immigrants ... What is your family's immigration story? Are you a Native American?"

Coulter's reply was curious: "Yes, I am. I'm a settler. I'm descended from settlers. Not from immigrants ... I'm not living in the Cherokee Nation. I'm living in America, which was created by settlers, not immigrants."

Every school child knows that the United States is a nation of immigrants, and genealogists in particular are hyper-aware of this reality since we routinely trace our family trees back to those who came to America from the "old country," so Coulter's peculiar logic and word play provoked my own curiosity about her heritage. I decided to take a peek into her past, starting with her parents.

The obituary she wrote in tribute to her mother, Nell Husbands (Martin) Coulter, revealed that the maternal half of her family history is well known and extends back to colonial times, so I opted to explore the unknown - her father's side of the family.

My research got off to an unexpected start when one of the first documents I consulted - the 1940 census - recorded Coulter's father and grandparents as African American. If you look below in between the columns that note gender and age, you'll see "Neg" (census instructions that year specified this abbreviation for "Negro") for all four family members.

(as seen on Ancestry.com, FindMyPast, and FamilySearch)

This is an error (writing on the page varies, suggesting the enumerator completed some fields from memory after the fact) and the balance of my research led to very different conclusions. Ultimately, here's what I learned about this side of her family:

All eight of her paternal great-great-grandparents (four couples) came to America from Europe. Six of these eight were Famine-era arrivals from Ireland, while the other two were from Germany. Her Irish ancestors wouldn't have been welcomed with open arms as can be seen from these typical 19th century political cartoons showing the Irish as desperately poor, conniving, criminal, lazy, and impossible to assimilate (more examples here). 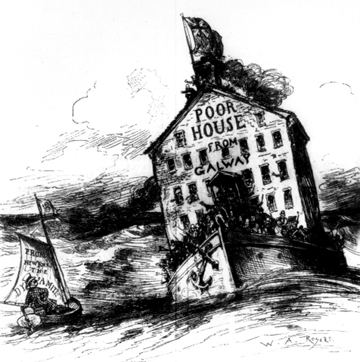 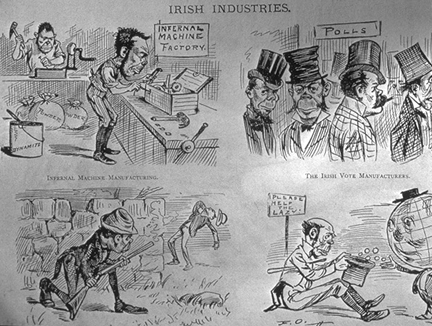 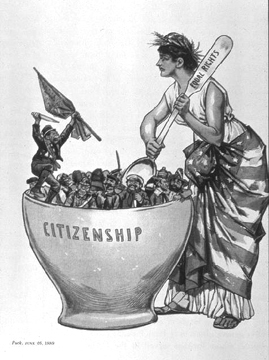 Many regarded the Irish as being of a different and inferior race, made all the worse by the fact that most were Catholic: 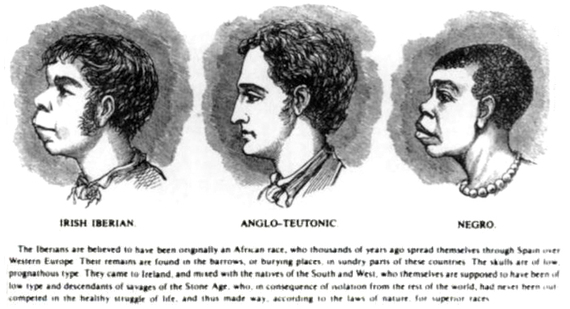 (Thomas Nast Cartoons website, though this is not one of his)

Nor were Germans exempt from anti-immigrant sentiment, as illustrated here where both the Irish and Germans are depicted as running away with the vote. 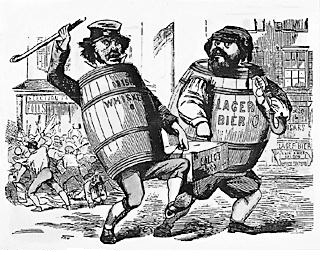 The occupations of Coulter's ancestors were a cross-section of what was typical for the time - laborer (most likely on steamboats, given the location), brick and tile maker (who later ran a saloon), carpenter, and flagman. Sadly, after working for the New York Central and Hudson River Railroad for roughly 35 years, this last fellow - Peter Keegan - lost his life when hit by a train. 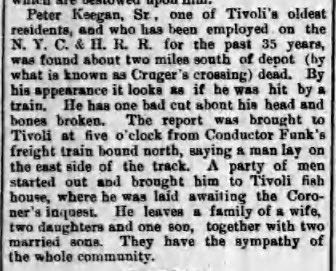 Her family lived in a cluster of New York counties - Albany, Ulster and Dutchess (and later Columbia) - formally founded by the British in 1683, though all had a European (mostly Dutch) presence earlier in the 1600s. This area was home to the Lenape, Delaware Indians who had first encountered Europeans in 1524 when Giovanni da Verrazzano arrived. In fact, the Ulster County contingent of Coulter's family resided in Port Ewen, part of the town of Esopus named after a Lenape tribe the Dutch had once traded with there. They undoubtedly knew of Port Ewen's most famous resident, Sojourner Truth, who was briefly enslaved there and began her rise to national attention just as Coulter's Irish ancestors established their new home. 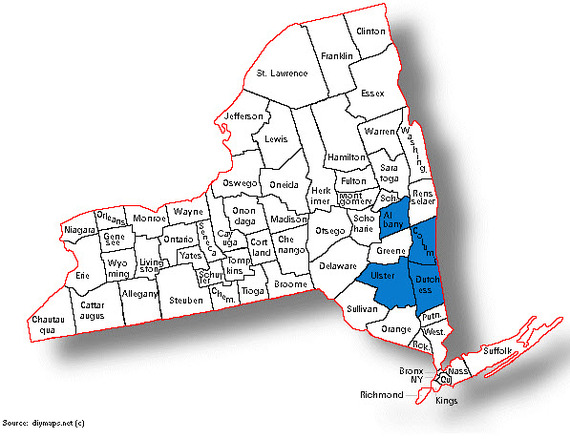 All four of these ancestral couples had their first American-born child between 1855 and 1860, placing them in this region approximately two centuries after fellow Europeans, some portion of that same 200 years for the more than 15,000 free African Americans who resided in Albany, Dutchess and Ulster counties as of the 1850 census, and an indeterminate period after Native Americans. On a nationwide basis, this timeframe also coincides with the tail end of the importation of enslaved Africans (made illegal decades earlier, but lingering before finally sputtering out), meaning that ancestors of the vast majority of African Americans today arrived well before Coulter's paternal forebears.

Given all this, referring to Coulter's conspicuously immigrant ancestors as settlers is a bit of a stretch - and I say this as someone who also happens to have four great-great-grandparents who left Ireland to escape the Famine and found their way to New York where they worked on the railroads (including one would perish on the job). Her ancestors and mine gave their labor, talents, and even their lives to their adopted country, but they were also the beneficiaries of all those - Native American, African American, and European - who were here long before.

That their contributions came a little later doesn't diminish them, but it's Coulter who wants to carve out a special class of "settlers," so it's inconvenient that she's descended from the kind of immigrants she'd like to deny entry to. Just as the Know-Nothings wanted to slam the door in the faces of Irish Catholics like Coulter's relatives in the 1850s, she wants to cherry-pick who to let in now. But as much as Coulter might wish to, you can't choose your ancestors, so it's worth contemplating that if the Know-Nothings had succeeded in doing what she advocates now, she and almost 12 percent of the American population wouldn't exist today. Still, if Coulter insists on claiming "settler" roots for the paternal half of her family tree, she could always accept her father's 1940 census record at face value.