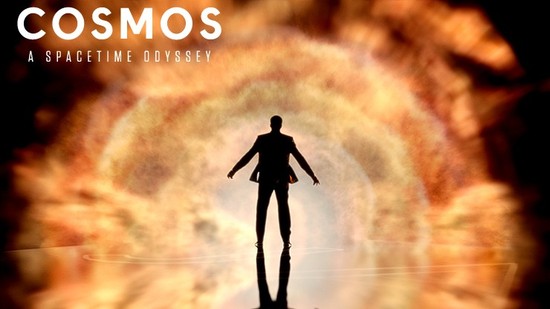 Carl Sagan famously said the cosmos was "all that is or ever was or ever will be," but the same could be said about the TV show Cosmos, the rockstar astrophysicist's 1980 science series. Along with future wife Ann Druyan and astronomer Steven Soter, Sagan created a landmark program that stirred excitement about mankind's place in the universe, and it educated without talking down to its audience.

But Sagan also said "exploration is in our nature," and three decades after the scientist stood on a sea shore and invited audiences on a universal journey, National Geographic and Fox are ready to once more set sail for the stars with a successor series, Cosmos: A Spacetime Odyssey. Though Sagan died in 1996, Druyan has kept her husband's legacy alive as writer and executive producer of the new 13-part iteration. Joining her and Soter for the new voyage is executive producer Seth MacFarlane of Family Guy fame and host, astrophysicist Neil deGrasse Tyson of New York City's Hayden Planetarium.

Described as the "saga of how we discovered the laws of nature and found our coordinates in space and time," Cosmos premieres Sunday, March 9, at 9 p.m. across 10 21st Century Fox networks (including Fox Sports 1 and 2) with an encore on Monday March 10, at 10 p.m. on the National Geographic Channel, with bonus footage and behind-the-scenes content. The series also premieres globally in 170 countries and 45 languages. A massive networking roadblocking, where it will be hard to avoid the series, is somewhat appropriate for a follow-up to what was the most popular series in PBS history.

In addition to a big premiere, Cosmos also has blockbuster pedigree. The effects are dazzling as Tyson acts as a tour guide on a new Spaceship of the Imagination, and the trip is accompanied by a score from composer Alan Silvestri. But most importantly for Druyan is that the new Cosmos has preserved the enthusiasm for science, without an ounce of fear or cynicism, that Sagan used to excite viewers in 1980.

In a recent interview, Druyan discusses how the new Cosmos matches with the original, and sheds light on how the stars aligned with MacFarlane and Tyson to make the series happen.

Why is this the right time to bring Cosmos back?

I always feel like it's the right time for Cosmos because it's always a good time to have that cosmic perspective and the kind of awesome power of science at your disposal. But here in the United States, I feel we've been coming out of a period of, if not outright hostility towards science, a period of alienation from science. We don't have that exploratory vision permeating our society ... I think it's an excellent time for Cosmos because it's time to get going again. I feel like there's an appetite.

How did Seth MacFarlane get attached to this project?

I have kids who are grown and Seth MacFarlane was a hero in my household for "Family Guy" for a decade before Neil deGrasse Tyson introduced him to me. This came about in a funny way. Neil was doing the inaugural science outreach in Hollywood for the National Academy of Sciences, and Seth - being a person who really has a lifelong interest in science that stretches back at least to his childhood viewing of the original Cosmos - attended this outreach, heard Neil speak, and followed up several months later. By that time, I had already asked Neil to be the host of Cosmos. We were looking for the right platform, went to the usual suspect networks to try to mount a new Cosmos. Everybody wanted it, but nobody wanted to give me the creative freedom I thought was necessary to protect the legacy of Cosmos and Carl Sagan. Seth came to Neil, they were talking, Seth asked Neil how he could support scientific research or some kind of project that would foster a greater public awareness of science. Neil said, what about Cosmos?

Where did the idea of animating certain historical heroes emerge?

The whole idea of animating the lives of these heroes of knowledge was Seth. When he first suggested it to me, I was momentarily taken aback. I had been imagining we'd be doing these dramatic recreations as we did in the original series. Then, the more we thought about it, I realized how right he was. What they created was I think a dozen graphic novels, each with a completely different style. And of course we were able to attract some marquee names like Richard Gere, Kirsten Dunst, Patrick Stewart, Alfred Molina, Marlee Matlin - a host of really brilliant actors - to give life to the gorgeous animation.

What is it about Neil's position in science literacy that made him the go-to choice for the host?

I've known Neil for 20 years. As soon as I started thinking of this new series, which goes back seven or eight years, I knew Neil was the guy to do it, for many different reasons. For one, the thing about Carl, for as brilliant as he was, and as knowledgeable, he never spoke to impress people with how much he knew, only to communicate. I think that's one of the reason's he's still so beloved. The same thing is true of Neil. With his many achievements, to walk with Neil is to feel a person who just wants to share the information.

Do you have any thoughts about how the Internet and social media will help get the message of science and Cosmos out there?

I think the rise of the Internet is certainly one of the most hopeful things that has happened to human civilization. I wish Carl were alive to know about it. He dreamt of the planet becoming an intercommunicating organism, and that's what's happened in the years since his death. I'm thrilled about that because it's a world community of people who love Cosmos, who love the original and who are hungering for this new series.

What would Carl think about Cosmos coming back, and is there anything in this new version that you and he were not able to do before?

One of the things we would've liked to have done in the original version is tell Giordano Bruno's story. The other thing is our technological capability to simulate nature on the grandest scale has grown by leaps and bounds since 1980. For instance, the cosmic calendar of the original series, which I think was very effective, did have some cardboard dinosaurs in there. This new cosmic calendar ... the reveal when Neil is just walking among the stars and all the sudden we pull out to reveal the vastness of the calendar, and to lose Neil as a tiny figure on the calendar. There are moments like that I think Carl would have absolutely loved with the original series. The voyages we take in the ship of the imagination to other worlds and other universes, I think he would have just loved. He would be thrilled that this new Cosmos is going to be the largest roll out of a television series in planetary history. He'd be proud his flame is still burning so brightly.

If the response is what you're hoping for, could a second series be possible?

I don't know what to wish for. At this point, what I'm really excited about is going home after being in L.A. for nearly two years to produce this. I hope it's a success because the industry is so slavishly imitative that, if it's a success, every network is going to want to do their own science series. That would be so good for our society.