Just when we think we've got Ann Romney's style figured out, the first lady-in-running throws us a curveball. A very, very bright curveball.

Ann and Mitt Romney hit up the newly branded "LIVE! with Kelly and Michael" last week, the couple's first daytime talk show appearance since the campaign began. For the episode, which aired this past Tuesday, Ann chose a bright silk print dress that practically blinded us the minute she emerged onstage (and we weren't even watching in HD).

The bold piece was covered in a loud pink, orange and yellow flower print, of which there was plenty: the dress featured long sleeves and a high neck with a hem that stopped right around the knee. Paired with a chunky multi-stand necklace, the outfit was... a lot. In fact we were reminded of Ann's "wild and crazy" bird shirt from her last appearance on daytime TV.

Women's Wear Daily wasn't loving the ensemble, writing yesterday, "Romney's look, a brashly-hued floral print silk dress, veered more toward Lisa Frank than First Lady." Or, as one of our editors put it, "It looks like someone found it in the bottom of the 'Mad Men' wardrobe bin."

We're sure that Ann, who generally favors a subtler look (bird shirt notwithstanding), was simply trying to pop on camera. But for a good dose of color, we recommend Romney stick to the playbook that brought us that stunning red Oscar de la Renta frock at the Republican National Convention. That dress was a winner.

Check out Ann's vibrant dress in the video above. Do you think the look is too bright or just right? 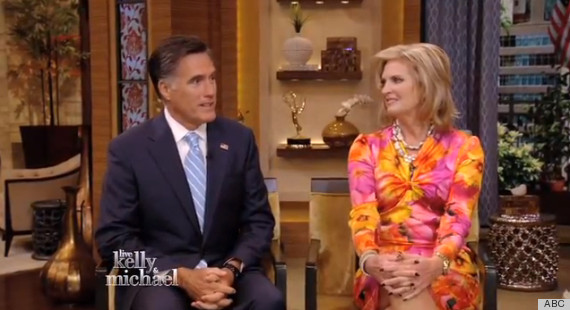