The eleven paintings by Anne Harris at Alexandre Gallery are both seductively beautiful and disturbingly ugly. The beauty is in the lusciousness of the paint, the graceful drawing and the myriad ways that Harris uses paint-space to undermine the old-masterly illusionism of the pictures. The ugliness is in the ghoulish red-rimmed eyes, eyelids and faces; the distortions of weirdly lit flesh and the unpleasant putty color of both figure and ground. 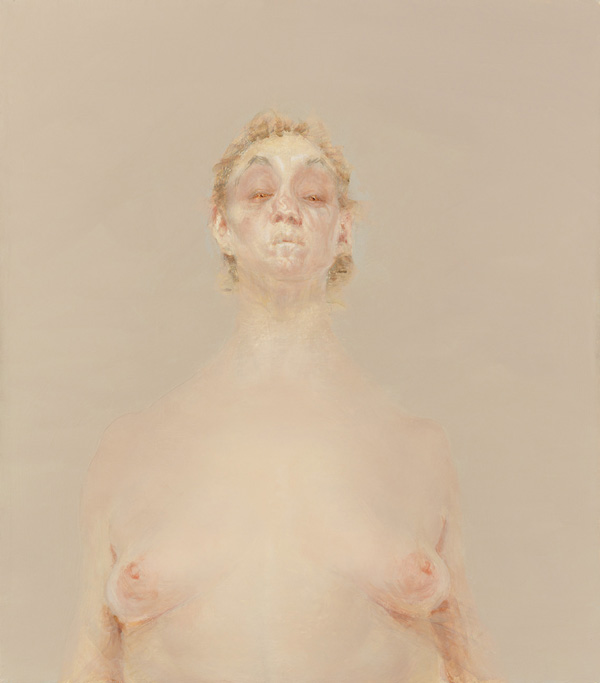 The harsh eye of these paintings brings to mind the portraits of women by Otto Dix such as "Half-Nude" from 1926, or the painting "Into the world came a soul named Ida," by Ivan Albright which hangs at the Art Institute of Chicago where Harris teaches. Unlike those examinations by men of feminine corporeality, however, these are self-portraits, little though they land as objective likeness. The hyper observation and literal navel gazing in these paintings suggests both self-loathing and self-regard and oddly plays out, for this viewer, as both deeply interior and supremely detached, as if we are looking at projections of the psyche or the fabrications of a horror movie rather than something from our flesh and blood world. What saves these paintings from morbidity though is not just the high level of craft with which they are painted, but also the surprising disruptions of illusionistic expectation that is for me, the highlight of that craft. 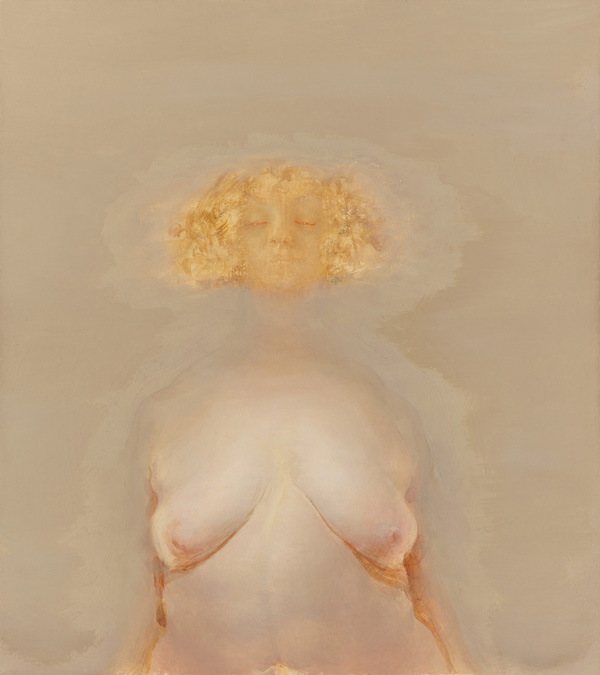 "Invisible (Blonde), 2011-12" may be the most surprising of the lot. As in most of the paintings, the figure's breasts and ribcage are more fully modeled and thrust forward exaggeratedly. I'm reminded of a story about Delacroix obsessively painting and repainting a hand until it had grown grotesquely out of proportion to the rest of the figure. In Harris' case the distortions are clearly purposeful; it appears that in working from life, Harris has placed the mirror low and tilted up so that head and shoulders recede more dramatically. She has pushed the neck and shoulders still further back by burying their contours under layers of paint merging them into the tonalities of the pink-green-beige-colored ground. Above the resulting near non-presence of neck stem floats a golden head, barely realized beyond the level of an under painting. The hair, billowing out like a mushroom cloud, is given form with a few deft marks, while the mask-like face only hints at corporeality through minimal scumbling and glazing. All of these painting choices undermine the traditional hierarchy of illusionism and illustration which typically gives primacy to the face and hands (there are no hands at all and barely the hint of arms in Harris' more recent paintings). 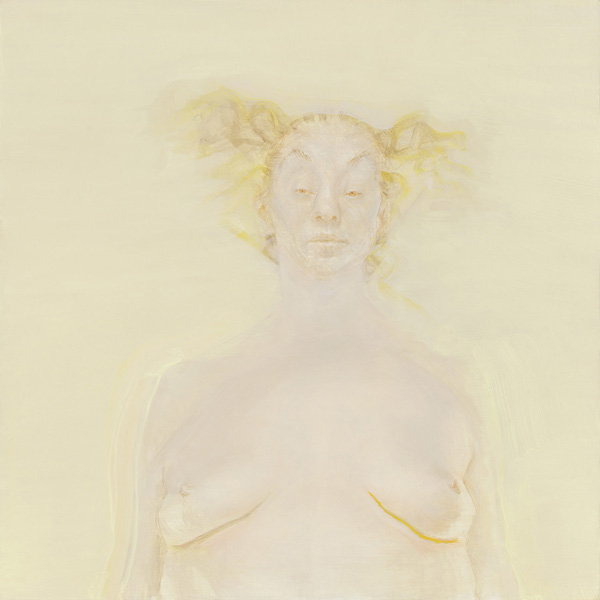 "Invisible (Yellow), 2013" sets a super-light vaguely pink-purple-gray figure against a high pale yellowish ground. (It is consistent that Harris uses colors that are difficult to pinpoint, like the experience of trying to describe a white wall after staring at it for a long time.) Chromatic peaks are offered by the golden eyes, a yellow line of under-breast shadow, and the rapidly rendered squibs of yellow hair in a painting that, as its title suggests might otherwise disappear. Oddly in this, as well as others of the paintings, a heavy impasto pentimento has been left around the otherwise diffuse arms and shoulders rather than wiped or sanded out. There is a more physical paint presence to the aura of the figure than to the figure itself. I will resist the temptation to reductively pyschologize these phenomena as meaning. I propose instead that what Harris is doing in these rather demanding and subtle paintings is engaging the viewer in questions about space, presence and seeing and challenging received conceptions of what constitutes portraiture. Are these paintings revealing self-images or are they masks that hide the self? Viewers who want simple answers and easily encapsulated socio-political agendas are likely to miscategorize these paintings. Those willing to take time with these paintings, in person, will be rewarded by the magic of what paint can do and the deepening mystery that results from really looking.