In the new heist reboot “Ocean’s 8,” Anne Hathaway portrays the vainglorious actress Daphne Kluger, who, while being fitted for a decadent gown and jewels to wear to the Met Gala, has a picture-perfect meltdown ― the kind of fit we imagine every Hollywood type throwing in her most spoiled circumstances.

Daphne is soothed only when her kooky stylist, Rose Weil (Helena Bonham Carter), offers a compliment: “You have the best neck in the business.” Instinctively, Daphne peers into a mirror and caresses the skin near her collarbone, relief glistening across her face.

Flattery accepted. Crisis averted. The show will go on.

It’s the sort of reaction you might expect Anne Hathaway to have in the middle of a multimillion-dollar styling session ― if, that is, you subscribe to the once-ubiquitous refrain about Anne Hathaway being, well, a vainglorious actress obsessed with manicuring a persona built on pseudo-sincerity. She’s a grown-up theater kid hunting for America’s-sweetheart status, the tired cliché went.

To quote Hathaway, it came true: After people spent years dinging or defending her via quippy tweets, heartless blog posts, thoughtful rejoinders, biting straw polls, predictive bulletins, redeeming profiles, detailed cultural digests and outright mea culpas, Hathaway has proven to be the ultimate sport. Her entire “Ocean’s 8” performance is a campy, delightful critique of what it’s like to be an image-conscious woman playing the celebrity game.

But this time, Hathaway is in on the joke ― and the joke is on us.

When the nebulous peanut gallery that is the internet decides to dislike someone famous who didn’t do anything overtly wrong, that person is supposed to ignore it. To acknowledge epithets is to reveal that you care about them, and caring is deeply uncool. The phenomenon known as Hathahate didn’t leave its namesake room to risk seeming lame. Her earnestness became something of an Achilles’ heel. But instead of soldiering on with the same purposeful humility that made her the butt of too many jokes, Hathaway has turned her reputation into meta-commentary.

Daphne Kruger is the host of Vogue magazine’s annual Met Gala, accurately touted in “Ocean’s 8” as the most exclusive ticket in American pop culture. (Hathaway herself is a Met Gala regular.) Hosting duties go to starriest of the stars ― this year, it was Rihanna (Hathaway’s “Ocean’s” co-star), Amal Clooney and Donatella Versace ― which places Daphne on the veritable A-list. But her moxie stems from the envy she feels for Penelope Stern (Dakota Fanning), a younger luminary considered Hollywood’s latest “it” girl.

Daphne’s fashion choices are made with an eye toward one-upping her competition. She fits the diva role we assigned to Hathaway despite little evidence to support such a claim. It’s not too much of a stretch to interpret Penelope Stern as the Jennifer Lawrence of the situation ― the trendy actress whose effortless BFF quality makes her the counterpart to Hathaway’s calculated charisma.

In order to crib a ludicrously expensive Cartier diamond necklace, two con artists (Sandra Bullock and Cate Blanchett) convince Daphne to be styled by Rose Weil, a washed-up designer who was “big in the ’90s” but still courts favor with Anna Wintour, the Met Gala’s high priestess. Poised and dulcet-tongued, Daphne wouldn’t have gone anywhere near Rose, who has fallen from runway icon to debt-ridden Nutella fiend. But Daphne believes Penelope is enlisting Rose, who in turn is a pawn in the con artists’ elaborate heist scheme. If Rose can get that Cartier hardware onto Daphne’s neck so they can later replace it with a fake, the ruse may work. Game on.

Cue a series of narcissistic maneuvers so over the top in their Hollywood grandeur that Hathaway might as well wink at the camera. With the stroke of her neck or the batting of her judgmental eyes, Hathaway knows how to tee up everything you once said about her for maximum comedic effect.

It also closes the book on this chapter of Hathaway’s image. Famous since the vulnerable age of 19, the 35-year-old actress had made it known long before “Ocean’s 8” that she is familiar with the backlash she inspires. Hathaway did the uncool thing, but, in an ironic twist, that’s what made her cool again.

“It comes up in every interview I do, just about,” she said last year, referencing her reputation while promoting the underrated comedy “Colossal.” Hathaway had been discussing the phenomenon since 2013, when her saccharine Oscar acceptance speech accelerated the Hathahate. “It does get to me,” she told Us Weekly. In 2014, Hathaway pinpointed exactly why some people turned on her: “One of the things I’ve been accused of is being inauthentic,” she told Harper’s Bazaar, admirably crossing a line that celebrities often don’t by speaking candidly about the public’s reaction to her persona.

After Hathaway stepped back from the limelight ― “My impression is that people needed a break from me,” she told HuffPost ― she returned more unflinching than ever, willing to reflect on her notoriety and play around with the sort of tropes we’re now seeing in “Ocean’s.” It’s that willingness that placed her on the other side of the Hathahate spectrum. Now it’s off-trend to dislike Anne Hathaway, who endured this cycle so we could have, what, a little snarky fun? Like last season’s runway garb, the joke went out of style. But that wouldn’t be the case if she hadn’t defied her detractors so gloriously, if she hadn’t accepted her temporary position as human piñata. At this point, the internet has taken to apologizing to Hathaway, and demanding you do the same ― a sign of the newfound wokeness that’s made us more conscientious when roasting famous women for sport. Here’s a rare example of American popular culture overcoming its collective schadenfreude.

And how can you hate her, really, when Daphne Kluger is strutting around with all the performative effortlessness and unabashed diva cachet that Hathaway supposedly aspires to? By the end of “Ocean’s 8,” Daphne is the smartest person on the scene ― one step ahead of everything happening around her. Turns out Anne Hathaway was, too. 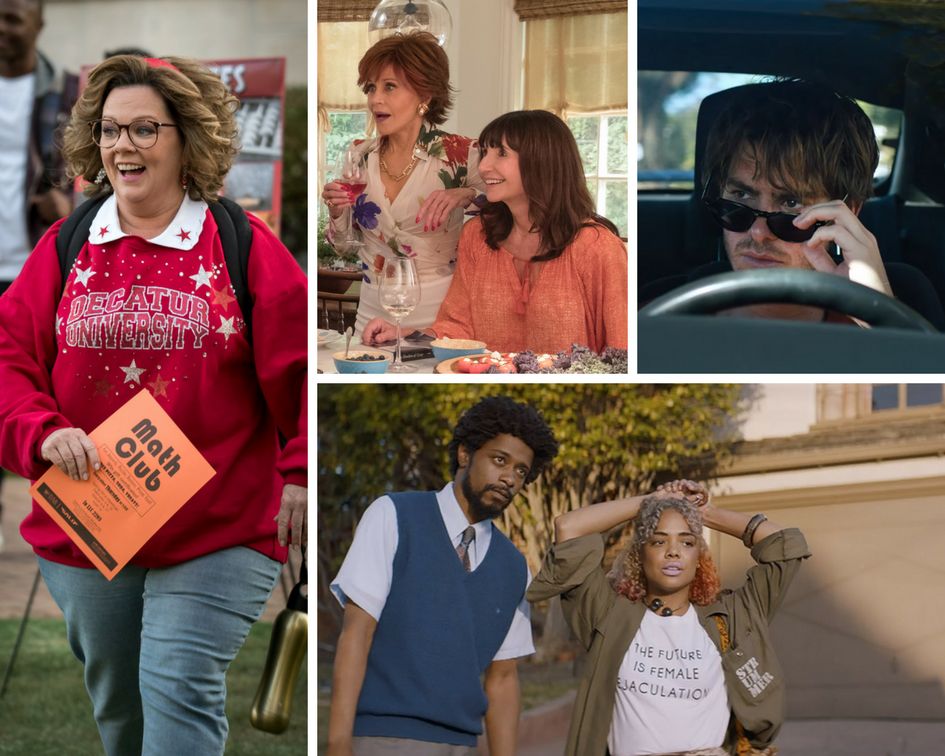 1 / 8
Laugh riots
After a gender-swapped "Overboard" remake&nbsp;jumpstarts&nbsp;the summer comedy slate, box-office queen Melissa McCarthy will do what she does best: thrust herself into&nbsp;more unruly antics. In <strong>"Life of the Party"</strong> (May 11), she plays a middle-aged divorcee who embraces her inner 20-year-old and returns to college to complete her degree. One week later, the latest superhero movie,&nbsp;<strong>"Book Club"</strong> (May 18), unites Jane Fonda, Diane Keaton, Mary Steenburgen and Candice Bergen as "Fifty Shades of Grey" converts. <br><br>On the indie side, two festival favorites -- <strong>"Under the Silver Lake"</strong> (June 22) and <strong>"Sorry to Bother You"</strong> (July 6) -- deliver laughs with a more avant-garde flair. "Lake" stars Andrew Garfield as a Los Angeles stoner who gets wrapped up in the mystery of his missing neighbor (Riley Keough), and "Bother" employs Lakeith Stanfield as a down-on-his-luck telemarketer who suddenly climbs the corporate ladder and finds himself embroiled in a bizarre netherworld replete with a cocaine-guzzling Armie Hammer.
Warner Bros/Paramount/A24/Annapurna<br><b>Clockwise from top left:</b> "Life of the Party," "Book Club," "Under the Silver Lake," "Sorry to Bother You"