* Conditions were said to be "extremely unsafe"

* About a dozen fires burning across Idaho

SALMON, Idaho, Aug 21 (Reuters) - A young U.S. Forest Service firefighter killed this month in Idaho lost her life battling a blaze that an elite "Hotshots" squad had retreated from the day before, warning that conditions were too dangerous, a report from the crew revealed.

A falling tree in the so-called Steep Corner Fire of north-central Idaho killed 20-year-old Anne Veseth on Aug. 12 in her second season as a government firefighter.

A day earlier, the Montana-based Flathead Hotshots, a team of highly trained Forest Service firefighters, had walked off the blaze amid conditions they described as "extremely unsafe" in a report posted on SAFENET, a Forest Service website that allows fire crews to report safety concerns anonymously.

The report cited widespread hazards such as the toppling of dead or dying trees, or snags, as well as helicopters dumping water on personnel manning the fire line and crews stationed below a fire that was burning downhill on a steep mountainside.

The team said it had "huge concerns about the number of snags burning, the size of them and the amount that had already come down" in a blaze battled in part by makeshift crews, including Idaho prison inmates, under the direction of the Clearwater-Potlatch Timber Protective Association.

The private non-profit organization is chartered by the Idaho Department of Lands to fight fires on private lands, often controlled by logging companies, interspersed with state parcels in northern Idaho.

The Hotshots, who generally work in teams of 20, also complained of poor management of a fire that had burned about 40 acres (17 hectares) at that point, and they reported the only objective appeared to be to dig a fire line by hand.

"No one had an eye on the big picture or seemed to be in control or in charge," they said in the report.

They told a separate U.S. Forest Service crew that "what is going on here is extremely unsafe" before informing the association's incident commander that certain standards and protocols needed to be followed.

"He said he would just have to send us home then. We said that was fine," according to the report.

Before walking off the fire, the Hotshots read a list of safety concerns and methods for mitigating them to the incident commander. It was not clear if the timber association implemented any of the recommendations in the report, which the Forest Service confirmed was compiled by the Flathead Hotshots.

A probe into Veseth's death is under way by the Forest Service, which declined to comment on the matter. Cameron Eck, fire and program manager for the timber association, also declined to comment, but said firefighter safety was a priority.

The Steep Corner fire, which as of Tuesday had burned about 350 acres (140 hectares), ranks as one of the smaller of about a dozen blazing across Idaho this week, some consuming tens of thousands of acres and threatening thousands of homes.

Veseth's death brought to 12 the number of wild-land firefighters killed this year in the United States, according to the National Wildfire Coordinating Group. (Editing by Steve Gorman, Cynthia Johnston and Peter Cooney) 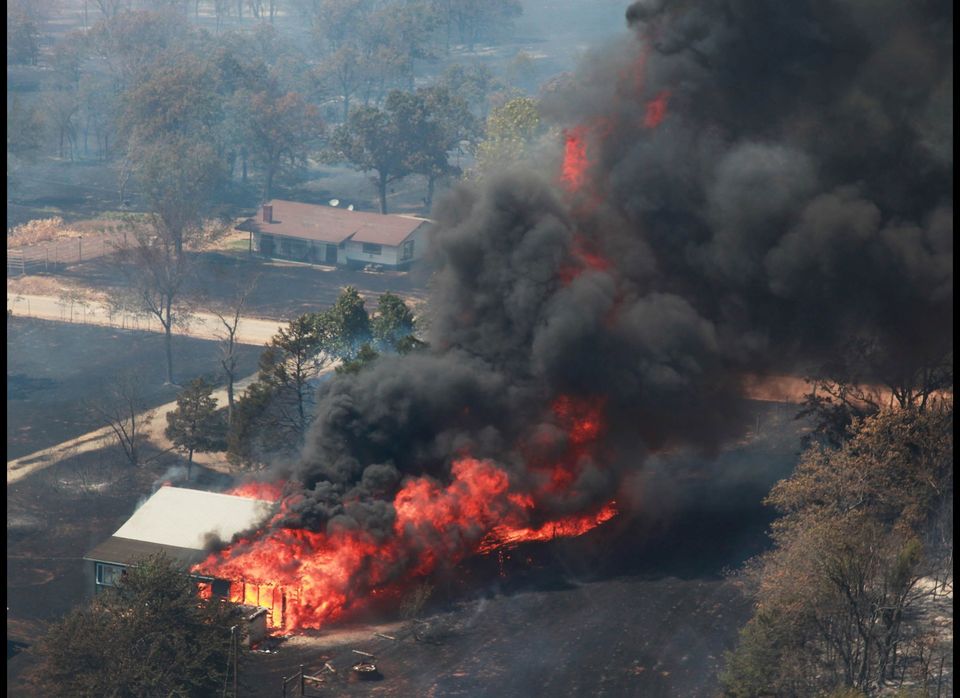 1 / 26
A house is engulfed in flames near Highway 48 and HW 38 junction east of Drumright, Okla., on Saturday, Aug 4, 2012. Emergency management officials have ordered evacuations of homes in several areas as wildfires burn across the state. The Oklahoma Department of Emergency Services says no injuries have been reported. (AP Photo/Tulsa World, Tom Gilbert)
AP