Orange is the New Black saved last season's biggest bombshell for its Christmas pagaent finale. And, it was Litchfield's least likely offender -- the mute inmate Norma Romano, played by Annie Golden, who stunned everybody when she broke her silence with an unforgettably soulful "I Saw the Light."

Although the show is inspired by real events in the life of memoirist Piper Kerman, Norma's performance may be the truest case of art imitating life on the show -- after all, Annie Golden, the actress who plays Norma, has been bringing down the house with her voice for decades.

"Annie is just magical," said Marc Shaiman, the Tony, Grammy, and Emmy-winning (and Oscar-nominated) composer who has known Golden since casting her in his first off-Broadway musical, Dementoes.

"She can't help but be mesmerizing."

Whether "walking the boards" on Broadway or captivating a crowd of malcontent punks and Bowery junkies at CBGB, Golden has traversed genre and art form with mind-blowing ease. She has landed featured roles in television and film, racked up numerous stage credits in Broadway musicals like Hair: The American Tribal Love-Rock Musical, Leader of the Pack, On the Town, The Full Monty, and Violet, to name just a few.

"I was the illegitimate child of the legitimate theater," laughed Golden.

"I had no training. I came from downtown rock and roll and when I came in and auditioned for the Broadway revival of Hair I had no eyebrows -- kind of a Bowie-esque glimmer kid. And it was hard representing the flower power era when we were stone cold punks."

It was that exact moxie that caught the eyes and ears of Czech New Wave wünderkind and Oscar-winning director Milos Forman when he walked through the doors at 315 Bowery and watched Golden's Brooklyn band of brothers The Shirts electrify the crowd at CBGB.

"[Annie] was angelic looking, talking, and was our little angel," said Milos Forman who cast Golden as one of four leads in the motion picture production of Hair he was slated to direct.

"I auditioned several hundred young people for the part, and she was just perfect. I love Annie."

Her seminal life event was meeting Bob Racioppo, Ronnie Ardito, Norman Shwiry, and Artie Lamonica, her future bandmates in The Shirts. In a sense, The Shirts' musical evolution mirrored the likes of The Clash, Blondie, The Heartbreakers, even KISS -- baby boomers that had yet to develop their own musical identity until after Woodstock.

Whether or not they knew it at the time, The Shirts were going to be part of something historical -- an invasion of sorts spearheaded two years earlier by The New York Dolls, The Heartbreakers, and Patti Smith, who cut their teeth at venues like the dilapidated Mercer Arts Center and Le Jardin discothèque.

"One of our first shows at CBGB's was with Television. They were so cerebral, pining, poetic, angst ridden, and raw," Golden said.

"I liked that Tom Verlaine's girlfriend was bringing him water between songs and then that very girl, Patti Smith, fronted the next band. I remember thinking, 'Oh, I dig that.'"

"We could be at the club at the graveyard shift with Willie De Ville, The Tuff Darts, and Robert Gordon, and somebody would come in with a bloody nose saying, 'I just got jumped and they took my guitar,' and we'd spill out in the street saying, 'We're going to get those mother@#*%^rs.' It was not peace, love, and happiness. It was dangerous then to walk down East 3rd Street." 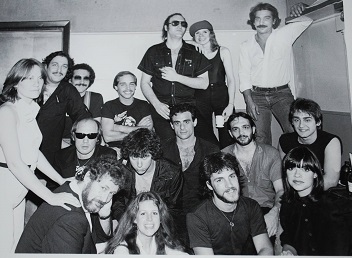 Though The Shirts were friends with Talking Heads and Dead Boys, there were scenesters who doubted their authenticity and regarded them condescendingly as a "bridge and tunnel band." That, however, didn't stop the group from being championed by the godfather of underground rock, Hilly Kristal, who elected to manage the band.

"Hilly was like 'The Fog,' a wonderful guy, but was really hard to interpret," remembers Shirts co-founder Artie Lamonica.

"We had band meetings and he'd say softly, 'I was talking to Capitol records,' and then he'd yell, 'Merv, will you make sure the beer delivery arrives immediately,' launching into CBGB business. Then he'd look back at us and say, 'He really likes you.' And we'd all say, 'Who likes us?' He he was not your typical, shifty manager and because he was Hilly, we got a record deal."

But despite the whirlwind of recording and touring, Golden was on a collision course with some other career opportunities. First, in 1977, she was cast in the Broadway revival of Hair: The American Tribal Love-Rock Musical, and then the film version which began shooting while she prepared to make her Broadway debut at the Biltmore Theater. Principal photography for the feature film began in September, 1977.

"Annie was the heart and soul of that group of hippies, she did her character beautifully and she really made the movie," said Golden's Hair co-star Treat Williams. "We started in the fall of '78, so we shot Central Park until the leaves left the park -- close to 8 or 9 months with shutdown periods. We did some scenes where we were freezing -- New York wet cold coming off the Hudson -- and Milos, who wore us out with 20-30 takes until we stopped acting. I remember him shouting at us, 'No ... no ... It's not natural enough. I think about the film and those people all the time." 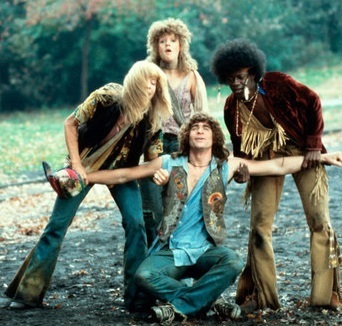 Before the film's release, Marc Shaiman asked Golden to play a rock and roll poetess called "Spike Heel" in his musical Dementoes. Shaiman had been the audition pianist for the Hair revival in 1977 and had tracked her down where she was working a day job.

"One distinct memory I have of the show is of me and the director Ted Pappas watching Annie through a little curtain on the side of the stage just singing her guts out on a song called 'Let me Out," Shaiman told us. "Ted and I were looking at each other, as if to suggest, 'Can you believe what is going on out there? That voice, performance style, I can't believe the energy coming from her, isn't she just unreal?'" 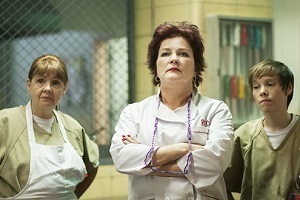 The irony that Golden, widely-known for her voice (Steve Buscemi once told her he'd pay to hear her sing the phone book) would be chosen to play the role of Norma on Orange is the New Black has never phased Golden.

"What I love about the show is that it is edgy, profound, funny, intense, and truthful, about how human beings find their humanity within it. You just have to make the most with the hand you're dealt, and these women are doing that. That's how these women are doing it in prison. It's resilience."

Golden, already invited back for the show's third season is currently appearing in Violet, on Broadway at American Airlines Theatre, until August 10th. Her band Annie Golden's Friends and Family will perform at The Cutting Room on Sunday, June 29th.

Click here to read Orange is the New Golden.