In 1901, Annie Taylor was the first person to go over Niagara Falls in a barrel and live to tell the tale. Sadly, no one was there to listen.

Why do I want you to know Annie Taylor's story? Because it's more than the account of a daredevil stunt. There is something quintessentially American about it, and also something disturbing in what it says about a longstanding attitude toward a large segment of the population that has never really gotten a fair shake -- older working-age women. Her story matters to me because Annie turned 63 the day she went over the falls.

Born in Auburn, NY -- not far from where I served as president of Wells College for 18 years, and also near Seneca Falls, birthplace of the women's suffrage movement -- Annie had been a schoolteacher but then fell on hard times after her husband died. She moved to Michigan, tried opening her own dance studio, taught music for a while, and even traveled to Texas and then Mexico looking for work. But hard times just got harder.

In an admittedly desperate attempt to avoid living her last years in poverty, Annie latched onto the notion of being the first person to go over Niagara Falls and live. Sure it was a crazy idea, but daredevils were making money those days, and she decided to take a chance. She had a carpenter custom-design a reinforced, mattress-lined barrel for her, and on her 63rd birthday, Oct. 24, she climbed in, was sealed inside, and was launched over the falls.

She came out down below Horseshoe Falls bruised, battered, but alive. We can only assume that she was also buoyed by the thought of the accolades about to shower down on her. She had even hired a manager to handle the publicity. 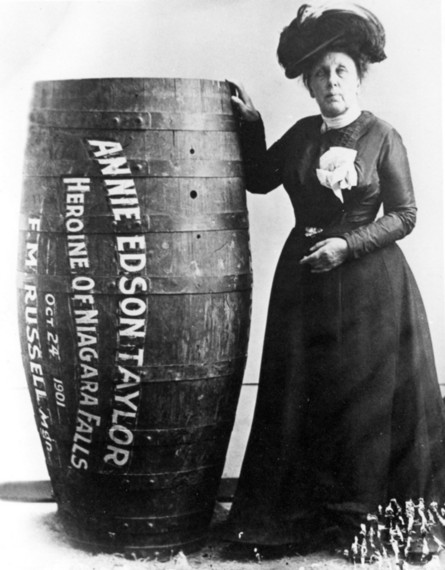 But the accolades never came. In fact, not long after, her manager absconded with the famous barrel and began touring the country with a much younger woman he claimed was Annie. Annie kept on trying to make ends meet. She posed for photographs at a souvenir stand, tried her hand at the stock market, began a novel, and worked as a clairvoyant. Looking at her efforts, you really get the sense that she was keeping her dreams of success alive.

Why did Annie never receive acclaim? Joan Murray, who has written a narrative poem about Annie's exploit, may have put her finger on the problem: "She didn't look right. She didn't look like a hero.... She was your grandmother."

I'd like to think that nowadays a grandmother would be as much lauded as, say, a younger woman -- or even a man -- for such an adventurous act. Perhaps she would. But in many important ways, older women still have the cards stacked against them and still fall prey to stereotyping that holds them back.

I see Annie as a hero. And I see heroism in the efforts of so many older women who are struggling to support themselves and their families. Their resilience, like Annie's, is an inspiration.

It wasn't easy for Annie, and it still isn't for many like her. For example, older unemployed women are having a particularly rough time getting back into the workforce. Before the Great Recession, unemployed women 50 and older accounted for only a quarter of the long-term unemployed -- those who have been out of work for six months or longer. Now, they account for fully half of the chronically unemployed.

The reasons aren't entirely clear. It may have to do with the fact that jobs traditionally held by women, like public school teaching, haven't bounced back as much as other forms of employment. Women also tend to shoulder most of a family's caregiving responsibilities, which gives some employers pause, unfair as that may be. Women who took time off earlier in their careers to raise children may also find themselves falling behind on the necessary sets of skills that today's technology-driven jobs demand. Unfortunately, too many employers don't give them the chance to learn those skills.

They should. Studies show that older workers -- both women and men -- are loyal, dedicated, take fewer sick days and time off work, and make fewer mistakes. They are genuine assets, and those who don't have needed skills are eager and willing to learn them. They're flocking to community colleges to take advantage of programs like AARP Foundation's own Back to Work 50+ program and our Women's Economic Stability Initiative, in which we're partnering with community colleges around the nation to offer older women practical advice on improving their jobseeking skills.

Annie Taylor faced a form of discrimination that wasn't even recognized as discrimination in her day. I could just rail against the injustice as it was then and as it still is now. But I choose instead to focus on what Annie has taught me about resilience.

Annie kept bouncing back, and her 21st century sisters are just the same. They're not lacking in resilience; they're only lacking in opportunity. It's well past time we make sure they get it.