Egyptian President Abdel Fattah el-Sisi's state is on a mission. It wants the five-year anniversary of the Jan. 25 Egyptian revolution to pass without event. It wants to demonstrate, once again, that everything is fine and completely under control. As the date approached, it frantically arrested activists, reinforced Tahrir Square and even, in yet another surreal scene, broke into random people's homes to check their Facebook posts.

The lengths to which the regime is going only reveals sheer fear. The state is frantically trying to suppress a movement it claims to have already suppressed.

Even as Egypt's central security chief declared that security forces "will not allow another revolution," the hashtag "the people demand the downfall of the regime" quietly became the top trending topic in the Arab Twittersphere. Tahrir Square, it seems, isn't a geographical location that can be occupied -- it's in an Arab generation's psyche. 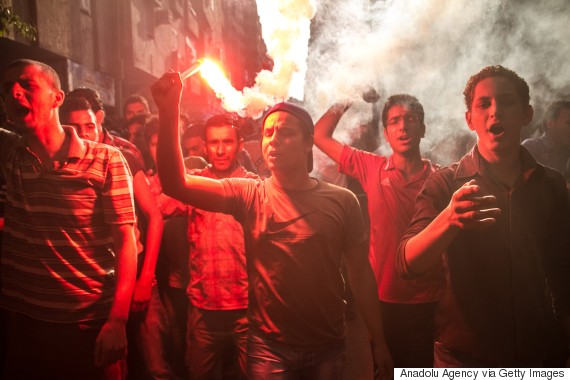 Youth protest against the Egyptian regime in the Matariya neighborhood of Cairo, Egypt on June 30, 2015. (Stringer/Anadolu Agency/Getty Images)

And yet, this Facebook post from an Egyptian young man reflects the situation the youth are in now:

In [former Egyptian President Hosni] Mubarak's days, I was thinking about emigrating. But in your days, [Sisi], I dream of getting asylum anywhere to escape your hell and your injustice. What do you want from the youth? Do you want to kill some more of us? Or do you need us so you can fill the prisons that you're still building? What do you want from us exactly? I hate being a young person now. I hate being a young person living in a country whose leader is you.

This post was in response to Sisi's recent statement, in which the president said to the youth: "Don't emigrate, we need you here." Sisi declared 2016 to be "the year of the youth. "The Egyptian foreign ministry prepared a media campaign titled "Egypt Better Today," which will reportedly highlight the 25 "most important accomplishments of the Egyptian state since 2011."

Five years since the youth-driven, euphoric, optimistic Arab uprisings, the Arab region has become an inhospitable environment to its own youth. There was a time when young Arabs dreamed that they could have dignity and liberty in their own homelands -- there were even cases of reverse migration by some émigrés. But today, our youth "dream of getting asylum anywhere."

The state is frantically trying to suppress a movement it claims to have already suppressed.

It is truly disturbing that after years of targeting, chasing, imprisoning, torturing and killing young activists and journalists, driving them to either silence or exile to escape the worst, Sisi dares to ask them to "not leave" because "Egypt needs them." Is this just a bad dream? How clueless must he be, how utterly obtuse, to not be able to connect the actions of his regime to the snuffing of hope in the hearts of millions of young people?

Egypt has had more than its share of surreal moments over the past two years, as it descended from dark tragedy to tragic comedy. We've seen conspiracy hysteria, including a muppet accused of terrorism and a stork "arrested" for espionage, as well as ludicrous army-sponsored claims of an AIDS and Hepatitis C cure and an amphibious flying vehicle. But Egypt's seemingly inexplicable tragicomedy is actually both predictable and explainable if we know where to look.

SISI AS A PARADIGM

Sisi is more than just a representative of the Egyptian army, the Arab "Ancien Régime" or a counter-revolutionary axis trying to brute-force a return to Mubarak's days. Sisi is all of that but above all, he is a representative of a paradigm built upon the idea that tyranny brings stability and efficiency; that jingoistic nationalism brings social cohesion; and that the backbone of the state is not the people or civil society, but the security establishment.

Perhaps, then, we should look beyond the realm of politics and into the march of ideas to explain the Arab Spring. Paradigms -- worldviews that drive our perception and interpretation of reality -- underlie our status quo, and as social and economic contexts shift, paradigms stress, break and eventually shift as new worldviews replace old ones, eventually forming a new status quo. This shift is neither smooth nor gradual.

The surrealism that we have witnessed in Egypt epitomizes neither the success of the strongman paradigm, nor its resurgence -- but rather, its breakage. Taking the helm of Egypt with a promise to bring stability, security and economic development, Sisi has instead led it to a paradoxical state of "sustainable instability." The strongman paradigm is broken -- and paradigms break before they shift. We're living through the limbo in between.

Broken paradigms have recognizable signs -- perhaps primary among them is a desperate insistence that everything is fine, that nothing is broken at all and that, in fact, things have never been better. A search for saviors and miracles ensues -- for that heroic, superhuman leader or that epic, supernatural event that can signal eventual victory and make everything go back to the way it was.

It's no surprise, then, that Egypt's kitschy "Sisi-mania" phase, peaking around his election in May 2014, had an Egyptian newspaper literally calling him "the messiah, the savior." The subsequent search for miracles was an undignified search for any success -- from the infamous "AIDS cure" to the now-scrapped "new capital" to the much more expensive "new Suez canal" which, despite costing 64 billion Egyptian pounds ($8.2 billion), has failed to increase revenue.

The Arab Spring today is stuck in the gaping limbo between the broken old and the nascent new.

But the outside world sees through the farce and is neither convinced nor impressed -- much to the chagrin of those committed to the broken paradigm. Conspiracy theories become the go-to way to explain failure, with dissenters bearing the brunt of accusations of treason or subversion. As the establishment fails to relate to the world, it withdraws into a toxic bizarre mix of xenophobia, isolationism and jingoistic supremacism.

But the machismo hides a deep inferiority complex -- a deeply wounded ego. Perhaps this is what makes people within such broken paradigms so hostile to comedians and so sensitive to comedy -- the emperor knows very well that he has no clothes on and absolutely despises whoever dares point a finger and laugh. It's ironic that the regimes that provide most material to comedians are the most threatened by them. 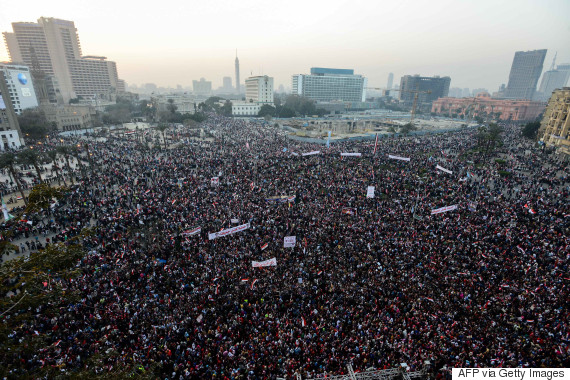 Egyptians gather in Cairo's Tahrir Square during a rally marking the anniversary of the 2011 Arab Spring uprising on Jan. 25, 2014. (MOHAMED EL-SHAHED/AFP/Getty Images)

WHEN THE NEW ARRIVES

Sisi's regime has every reason to be afraid. The old is beyond repair, living on borrowed time, repeatedly trying (and failing) to reassert itself with ferocious brutality and bumbling idiocy, despite the mass hysteria and the billions of dollars of aid. The failure of the old paradigm, and of Sisi, is just a matter of time. The only question is how catastrophic its failure will be, and how many innocent people will be crushed as it inevitably comes hurtling down.

But the new hasn't arrived -- and how can it arrive when its young agents are in jail, in morgues, in exile or silenced under pain of death or imprisonment or torture? "Remember the tomorrow that never came?," asks the Cairo street graffiti. What will it take for it to come? That is the key question of our time and the key historical challenge. It won't be easy and won't be a smooth landing, but we have no choice but to land.

The failure of the old paradigm, and of Sisi, is just a matter of time.

The Arab Spring today is stuck in the gaping limbo between the broken old and the nascent new. Five years ago, "we jumped off a cliff reaching for the moon" but never landed. Italian philosopher Antonio Gramsci calls such a moment in history a "time of monsters" -- and how big was the monster that had sprung. The monster that is the so-called Islamic State thrives on instability, and the instability continues so long as we haven't landed.

We won't be stuck forever; sooner or later, we will land. Despite the catastrophic scene, we are the future. Change happens at the precipice, and we're already past the precipice. Those who wish to get on the right side of history should help us land, rather than try to force us back onto the very cliff we jumped off of.

On the Anniversary of the Egyptian Revolution, Sisi Is Terrified
Remembering The Arab Spring