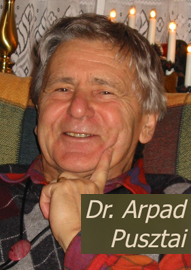 Twelve years ago, a 150-second TV broadcast changed our world; everyone everywhere owes a debt of gratitude to the man whose life it turned upside down—in his effort to protect ours. On August 10, 1998, eminent scientist Dr. Arpad Pusztai (pronounced Poos-tie) dared to speak the truth.

He had been an enthusiastic supporter of genetic engineering, working on cutting edge safety research with genetically modified (GM) foods. But to his surprise, his experiments showed that GM foods were inherently dangerous. When he relayed his concerns during a short television interview in the UK, things got ugly. With support from the highest levels of government, biotech defenders quickly mobilized a coordinated attack campaign trying to distort and cover up the evidence.

It worked for a while, but when an order of Parliament lifted Dr. Pusztai's gag order, the revelations touched off a media firestorm that ultimately kicked GM foods out of European supermarkets, and derailed the industry's timetable to quickly replace virtually all food with genetically engineered alternatives.

I recount the dramatic story of Dr. Pusztai below. In Part 2, I respond point-by-point to the biotech industry's denial and spin over the Pusztai affair, which is still being hyped in their new attack website.

By early 1996, genetically modified tomatoes had been sold in US supermarkets for more than a year, and GM soy, corn, and cottonseed were about to be widely planted. But not a single peer-reviewed study on the safety of GM foods had been published, and there was not even an agreed-upon protocol for answering the question,"Is this stuff safe?"

The UK government was about to change all that, and Hungarian born chemist Dr. Arpad Pusztai was their man to do it. He beat out 27 competing scientists for a £1.6 million grant to develop a safety testing protocol; it was supposed to eventually be required for all GM food approvals in Europe.

A Spud with Fire-Power

Pusztai's team was working with the vegetable equivalent of a James Bond car—complete with built-in weaponry. A potato was outfitted with an assassin gene from the snowdrop plant; the gene produced"GNA lectin," a protein that kills insects.

How did Dr. Pusztai feel about the fact that his prestigious Rowett Institute was preparing to release killer potatoes into supermarkets worldwide? Fine, actually. He knew that the GNA lectin was harmless—not to insects mind you, but to us mammals. Dr. Pusztai was the world's leading expert on lectin proteins, and the GNA lectin was the one he knew most about. He had studied it for nearly seven years.

But when Dr. Pusztai fed the GM potato to rats using his new safety testing protocol, he got a shock. Nearly every system in the rats' bodies was adversely affected—several in just 10 days. Their brains, livers, and testicles were smaller, while their pancreases and intestines were enlarged. The liver was partially atrophied. Organs related to the immune system, including the thymus and the spleen, showed significant changes. Their white blood cells responded to an immune challenge more slowly, indicating immune system damage.

In all cases, the GM potato created proliferative cell growth in the stomach and small and large intestines; the lining was significantly thicker than controls.  Although no tumors were detected, such growth can be precancerous.

Side Effects of Genetic Engineering Implicated

Dr. Pusztai and his team knew that the GNA lectin had not caused the damage. Other rats had been fed natural potatoes spiked with the same amount of GNA insecticide that the GM spud produced—and they did fine. The control group fed natural potatoes without added lectin were also in good shape. And in a previous experiment, Dr. Pusztai had fed rats an enormous quantity of the lectin, about 700 times the amount produced in the GM potato, again with no effect.

The damage to the rats, it appeared, came rather from the unintended side effects of the genetic engineering process. These effects (from gene insertion and cell cloning) may include massive collateral damage in a plant's DNA, with hundreds or thousands of mutations. Important natural genes can be inadvertently turned off, permanently turned on, deleted, reversed, scrambled, moved, fragmented, or changed in their activity level.

Dr. Pusztai wanted to find out precisely what went wrong in his potatoes, so he asked the government to provide more funds to conduct follow-up studies. But Prime Minister Tony Blair, his ministers, and his entire political party, were all unapologetic biotech cheerleaders trying desperately to promote them to a skeptical public. Exposing problems with GMO technology wasn't on the government's agenda. Additional funds were not forthcoming.

The UK television show "World in Action" asked Dr. Pusztai for an interview. With permission from his Institute's director, he spoke generally about his concerns with GMOs based on the findings. He was careful not to reveal the details of his study, which was still unpublished.

His 150-second interview was aired on August 10, 1998. The European Press went wild and Dr. Pusztai was propelled to the status of hero at the Rowett Institute. The Institute's director, Professor Phillip James, took over all the publicity efforts, described the research as a huge advance in science, and wrote in a press release,"a range of carefully controlled studies underlie the basis of Dr. Pusztai's concerns."

On the afternoon of August 11th, two phone calls were allegedly placed from the UK prime minister's office, forwarded through the Institute's receptionist, to Professor James. Dr. Pusztai's hero status was revoked.

The next morning, the director suspended Dr. Pusztai after 35 years of service. He was silenced with threats of a lawsuit and his twenty member research team disbanded. The government never implemented their GMO safety testing protocol.

The Institute released numerous statements, some contradicting each other, others misrepresenting the research, but all designed to discredit Dr. Pusztai and the implications of his findings.

Seven months (and one heart attack) later, Dr. Pusztai's gag order was lifted when the Parliament invited him to testify. As the true details of the study began to emerge, the media responded. About 750 articles on GMOs were pumped out within the month.

Biotech advocates swung into action. According to a leaked document obtained by The Independent on Sunday, three government ministers prepared"an astonishingly detailed strategy for spinning, and mobilizing support for" GM foods."One of [the] ministers' main concerns," said the report,"was to rubbish research by Dr. Arpad Pusztai."

The ministers' campaign relied on the participation of certain scientists, including those in the Royal Society, who could voice uncompromising support for GMOs. According to the newspaper, many of these scientists, while promoted as"independent," had received compensation directly or indirect from the biotech companies. The Independent admonished the government's actions as a"a cynical public relations exercise."

But the spin campaign was too little, too late. By the end of April 1999, just 10 weeks after Dr. Pusztai's gag order was lifted, the public's distrust of GMOs reached a tipping point. Use of GM ingredients had become a marketing liability. Within a single week nearly every major food company committed to stop using GMOs in Europe.

With his data finally returned to him, Dr. Pusztai and a colleague submitted their paper to a renowned scientific journal, The Lancet. Its editor, Richard Horton, told The Guardian,"there was intense pressure on The Lancet from all quarters, including the Royal Society, to suppress publication." The paper passed the peer review and was set to appear on October 15, 1999.

On October 13, Horton received a call from a senior member of the Royal Society. According to the Guardian, Horton,"said the phone call began in a 'very aggressive manner.' He said he was called 'immoral' and accused of publishing Dr. Pusztai's paper which he 'knew to be untrue.' Towards the end of the call Dr. Horton said the caller told him that if he published the Pusztai paper it would 'have implications for his personal position' as editor."

Although Horton declined to name the caller, the Guardian"identified him as Peter Lachmann, the former vice-president and biological secretary of the Royal Society and president of the Academy of Medical Sciences." Lachmann had been one of the co-signers on the Royal Society's open letter attacking Pusztai. He also had extensive financial ties to the biotech industry. In spite of his threats, The Lancet went forward with publication.

Courage, Integrity, and the Public's Right to Know

In the years since this controversy, Dr. Pusztai has given more than 200 lectures around the world on GMOs. He has been commissioned by the German government, academic publications, and others to do comprehensive analyses of GMO safety studies. In 2005, he received the Whistleblower Award from the Federation of German Scientists (VDW). And in 2009, he and his wife, Dr. Susan Bardocz—also an expert on GMO safety and formerly of the Rowett Institute—were presented with the Stuttgart Peace Prize for their tireless advocacy for independent risk research, as well as their courage, scientific integrity, and their undaunted insistence on the public's right to know the truth.

In 2008, on the tenth anniversary of his TV show, Dr. Pusztai reflected:

"On this anniversary I have to admit that, unfortunately, not much has changed since 1998. In one of the few sentences I said in my broadcast ten years ago, I asked for a credible GM testing protocol to be established that would be acceptable to the majority of scientists and to people in general. 10 years on we still haven't got one. . .

"All of us asked for independent, transparent and inclusive research into the safety of GM plants, and particularly those used in foods. There is not much sign of this either. There are still 'many opinions but very few data;' less than three dozen peer-reviewed scientific papers have been published describing the results of work relating to GM safety that could actually be regarded as being of an academic standard; and the majority of even these is from industry-supported labs. . ."

Although pro-GM governments and the biotech industry continue ignore the mounting evidence of harm, there is now a movement among many medical doctors, scientists, and the public, to reject GM food, create a tipping point of consumer rejection against them in North America, and put GMOs back into the laboratory where they belong.

I describe Dr. Pusztai's story in more detail in the first chapter of Seeds of Deception; his findings are also featured among the 65 documented health risks of genetically modified organisms (GMOs) in my book Genetic Roulette: The Documented Health Risks of Genetically Engineered Foods.

Earlier this year, GMO advocates Bruce Chassy and David Tribe launched an attack site against Genetic Roulette. As part of their attempt to defend the safety of GMOs, they assail Dr. Pusztai's work by reiterating the same faulty, self-contradicting arguments that were made during the smear campaign.

See Part 2 of this article, where their misleading arguments are exposed. This is the first in a series of point-by-point rebuttals to their website's allegations.