I had never in my adult life missed a Marathon Monday in Boston. For several years, I lived right on Beacon Street, on the route just after Heartbreak Hill as you move towards the finish line. I loved watching the runners: Friends and I would make silly, encouraging signs -- You've got nice legs! I would marry you right now! -- and wave at them as if they were our best friends. And I was indeed close to some marathoners: My brother even ran the race in 2007, after he returned from serving as a Marine in Iraq.

For more than a decade, I was a familiar face near the finish line. But last year, I missed the Boston Marathon.

I'd left Brookline, Mass., the year before to live with my husband in Ottawa, Ontario. I could have made it back for Marathon Monday, but the move had been costly. Like most twenty-somethings, I just didn't have a lot to spare. So, I made the "responsible" decision: I told my friends that I just couldn't afford the flight back home for the marathon. Not this year.

I had been texting my friends about how jealous I was all morning. Some were heading towards the crowd gathered at the finish line, while others were barbecuing outside our local tavern. Meanwhile, I was feeling resentful about missing one of my favorite days in my old city, being forced to watch coverage streaming online as I worked on my computer on the couch.

I didn't know that anything had happened until my husband called and told me to turn on the TV.

When the first bomb went off, no one knew what was going on, least of all the newscasters tuning into the marathon at the same time. I immediately texted my friends. 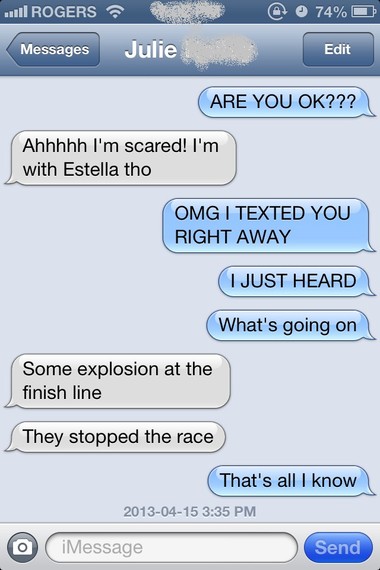 What followed was a tornado of misinformation. My friend Julie later told me that when she asked a police officer what was going on and what to do, all he said was, "Run." 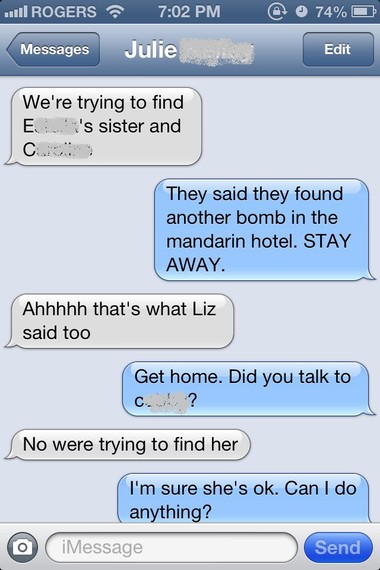 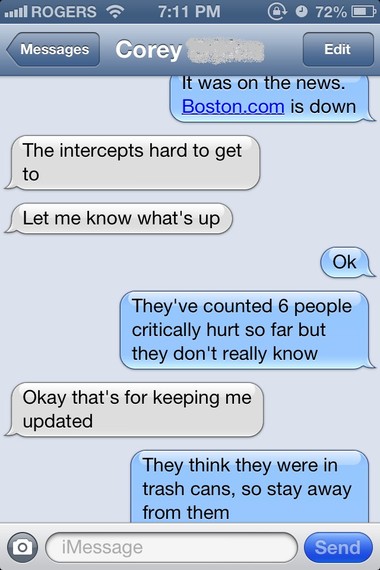 During Boston's lockdown, I too was on a lockdown of sorts, bleary-eyed and exhausted, watching misleading news coverage for four days straight. I felt like an outsider, watching everything happen at home from the safety of my living room thousands of miles away. It felt like a betrayal. And I took it out on the newscasters who were representing my city wrong. 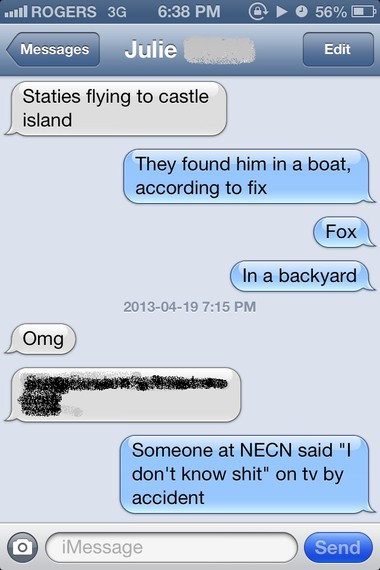 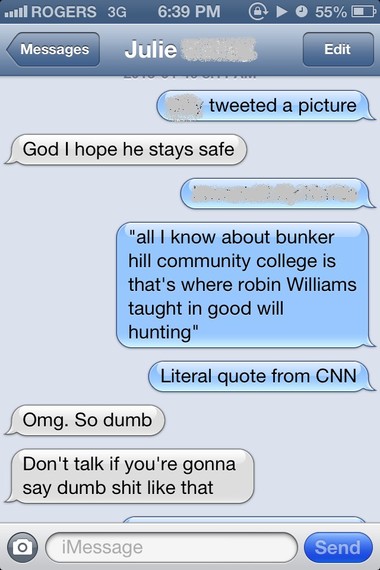 While my friend from elementary school was getting her home in Watertown searched by police, college students in my building in Canada were getting ready to go out for a party. I could leave my house in the same safety I felt every other day. A part of me wanted to be hunkered down in that apartment I loved on Beacon, with my roommates who had taken in runners unable to find a place to stay. I felt I didn't deserve to be up in Canada that night; it was some weird twist of fate. Just dumb luck.

When I was FaceTiming with my friend Julie yesterday, I found it strangely difficult to articulate my feelings about this year's Marathon. Whereas two years ago we would normally be giddy with excitement, planning pancake breakfasts and summer outfits, we now feel confused and lost.

And it feels even odder for the city of Boston to play host to people from around the world who've never been to the marathon before -- and only now care to attend for this anniversary. I can't help but feel like it's a sort of group rubbernecking event.

It's this sort of rubbernecking -- and the fact that these two men did this in the first place -- that is making us angry. But we don't want to be. This was supposed to be a joyful day, and we can't help but feel that joy has been taken away by gawkers; people who revel in a tragedy at an event they were never a part of.

When I asked Julie how she felt about going to the marathon this year, she said,

I'm looking forward to the marathon, but I'm still angry. I'm so excited to cheer on my friends who have trained so hard this past winter. I'm happy for all of the runners whose runs were cut short last year and will have the opportunity to finally cross the finish line... And most of all, I'm in awe of the survivors who have made unbelievable progress this past year.

But, part of me is still angry. I know that we can't erase tragedy from our collective human history, nor would we want to, but I hate that the Boston Marathon will forever be tied to the year of the bombings. Marathon Day has always been such a happy, fun-filled family day that shows Boston at its finest and I'm still so mad that two people worked hard to change that. What I just can't yet get over is that they achieved the notoriety they were seeking.

With the Marathon now just a few days away, I still haven't decided if I'm going home to Boston. I reserved the money for a ticket months back, but as it gets closer, it's getting harder to just book a flight. Going home means facing all of these emotions I've felt from far away for a year, and seeing what was once the happiest day of the year marked with such pure sadness.

My friend Corey will be spending Marathon Monday at her apartment, a couple blocks off the route, then at the same barbecue at the same tavern as last year. I asked her if that felt strange.

Bostonians have a way of emerging from tough situations even stronger, and I have a feeling that's what this year's marathon will look like. Everyone will come out with funny signs, cheer runners on, give out high-fives, just like they always have. It's always inspiring to see, but this year even more so, because it shows the city's resilience.

Those brothers got what they wanted on the day of, so all we can do is erase it going forward. So this Marathon Monday 2014, I know I must just book that flight and go home.

The Boston Marathon is never going to be the same -- and it shouldn't be. But I should be there, silly sign in hand, cheering until I lose my voice, encouraging the runners as they head toward the finish line, as we all work to move on and stay strong.

What the Dartmouth Rape Acquittal Really Teaches Us

Ellen Page Came Out as Gay, But Where Are Hollywood's Bisexual Role Models?

Why Can't I Fall Asleep? Battling a Lifetime of Insomnia and Panic Attacks